How easy to be cynical on this Labor Day, and declare it a day that will live in infamy for coal miners and coalfield residents and green job advocates across the nation.

But thanks to United Mine workers like Terry Steele, and West Virginia military veterans like Chris Carey, and green job advocates like Van Jones and Eric Mathis in Mingo County, Labor Day remains a hopeful reminder of the resiliency and epic campaigns by coalfield residents for economic and environmental justice.

Keep in mind: Verizon Wireless is not only a defiant sponsor of Massey's mountaintop removal-climate change-denying carnival, but now says Verizon Wireless didn't pull its ads on Glenn Beck as reported. UPDATED: Over 40 organizations, representing millions of Americans, have called on Verizon Wireless to withdraw its support.

Coal miners -- and coalfield residents around the country -- have lost one of their greatest advocates in Van Jones; and coal miners, in the hands of Big Coal and Massey Energy's mountaintop removal operations, will continue to lose their jobs, livelihoods and communities.

Not for the first time. Eighty-year years ago this same weekend, brave World War I veterans and coal miners endured bombings by hired coal company thugs to march on and liberate the same Logan County residents in West Virginia from the stranglehold of union-denying Big Coal. The Battle of Blair Mountain was the largest armed insurrection since the Civil War--and today its hallowed ridges are once again threatened by destruction, mountaintop removal.

Do Fox News' Sean Hannity and Ted Nugent, the speakers for today's Massey gathering, know the level of Big Coal ruthlessness that forced thousands of armed miners to march for union rights along the very roads they drove today? Do Hannity and Nugent know the despair and lack of economic development due to the same stranglehold of Big Coal on the coalfields today? 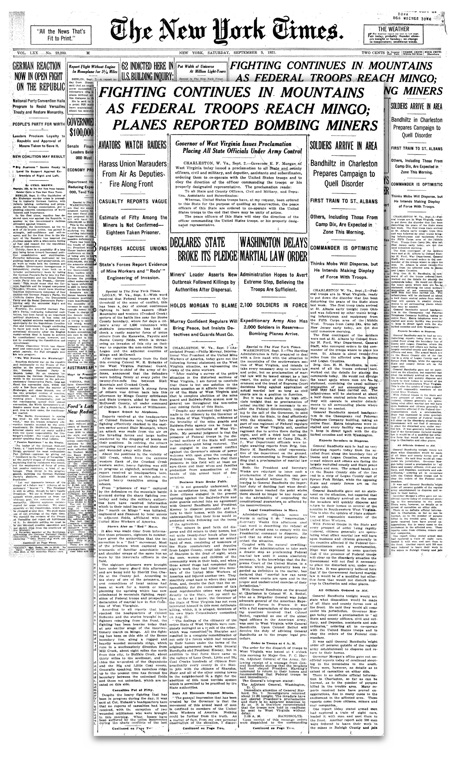 "What the UMWA had better realize is that some of its strongest union men are fighting with the environmentalists against MTR. These miners, like this writer, have lived and worked all their lives in W.Va. We have watched the deep mines close; MTR mines take our jobs, our land and our union. More recently, we watched the muddy flood waters pour off these sites, as it took roads and homes. Just a few MTR mines chained the union to the real enemy.

There are only two sides to this issue. On the right is Don standing at Logan, wrapped in the pretense of American freedom, with his bought judges, DEP agents and many misled souls. Don stands with promises of jobs and security. In one hand, is a new mining permit, and in the other is dynamite. In his heart and mind is power to put down the UMWA, the environmentalist, and to mine coal his way: nonunion, unregulated, any way he wants!"

Updated: "Despite the rally's name, it is not friendly to America to cling to an industry that keeps Appalachia in a stranglehold of economic and environmental impoverishment by permanently polluting water supplies, blocking green energy development and economic diversification, and contributing to global climate change. Coal corporations are making millions of dollars off destroying the mountains, and only pollution and poverty are trickling down to residents," said Tierra Curry, a native of Eastern Kentucky and biologist at the Center for Biological Diversity.

In truth, despite Massey's anti-environmental rants and climate-change-denying manifestos, more jobs have been lost or subjected to the whims of the volatile energy market, super mechanization, including the often overlooked bane of longwall mining in the northern panhandle, and mountaintop removal than any environmental regulations.

In a rare interview, Carey and Curry delivered an insightful analysis of the stranglehold of Massey on the region:

When Massey Energy CEO Don Blankenship was born in 1950, 130,000 West Virginians worked in the coal mines. Today, roughly 20,000 actual coal miners saddle up on heavy equipment to strip mine the ridges, or head into the underground mines.

In Blankenship's native Pike County in eastern Kentucky, nearly 50 percent of the coal mining jobs have been eliminated over the past 25 years, thanks in large part to highly mechanized strip mining. Here's a chart: 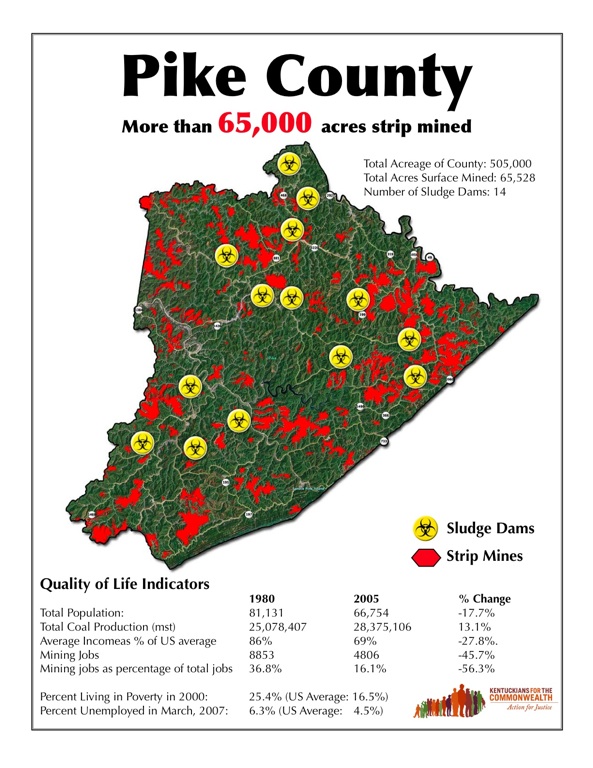 Not that Massey has lost any profits. During their 4th quarter 2008 Earnings Call last spring, Massey Energy executives crowed that "2008 was a very exciting and successful year for Massey, by many measures, the most successful in our history." Massey turned a $20 million profit in its last quarter in 2009.

And yet, these are the headlines from Massey:

Massey Energy Black Castle Mine, 300 Affected: Due to Market Conditions

Is this world of Massey violations that future for coalfield residents?

Even Big Coal's biggest supporter, Rep. Nick Rahall (D-WV), recently noted that "the state's most productive coal seams likely will be exhausted in 20 years. And while coal will remain an important part of the economy, the state should emphasize green job development."

Unlike Don Blankenship, Van Jones and West Virginia-based green jobs advocate Eric Mathis not only understand and respect the rights of coal miners, but they also have a plan for a sustainable economy and future for coalfield residents.

Jones told an interviewer in 2008:

"I think it's important that we be respectful of all the contributions that have been made by all workers. Even our coal workers are heros in a way... in that they've been asked to sacrifice their lungs, their health, their communities. We're now asking our coal miners to blow up their grandmother's mountains! Awful... Mountain top removal and strip-mining... Those coal miners don't set the energy policy in this country but they have to make the sacrifices to carry it out. I think that sometimes we aren't respectful enough, that we're not as encouraging and honoring of the people who have gotten America to this point."

Update: And, of course, we honor our modern-day redneck activists, Nick Stocks and Laura Steepleton, along with all of the coalfield residents and activists working for a sustainable Appalachia.