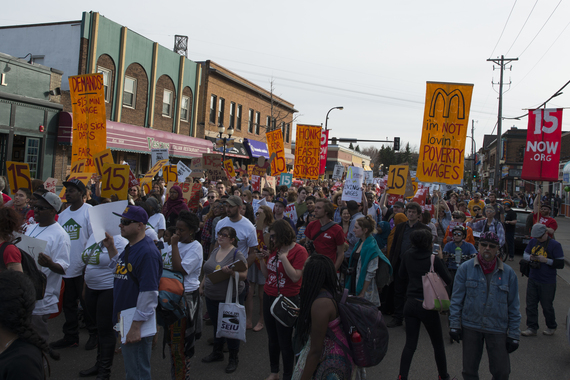 Even as the nation takes this long weekend to celebrate the American workforce, the rights and bargaining power of American workers continue to erode. From the rampant decline of union membership nationwide to the devastation of workers' rights under Wisconsin Governor Scott Walker, our national workforce faces harsh challenges to the preservation of fair pay and the rights to organize.

In 60 years, we've seen private-sector union membership fall from roughly a third of the workforce to just 6.7 percent. As a result, pay for private-sector workers has stagnated dramatically in the past 30 years, with non-union male workers lacking a college degree facing real wages even lower than they were in the late 1970s.

Amalgamated Bank was founded on a firm belief in the importance of preserving the equity and wellbeing of the labor force, and we continue to fight today for worker protections and the betterment of working peoples' financial security. As the largest majority union-owned bank in the country, we strive to offer the support and services working families need, and engage in aggressive shareholder activism to ensure corporations are held to the highest standards of responsibility.

Labor Day is a celebration of workers' accomplishments in America, and represents the best parts of our nation's devotion to protecting our workers from corporate abuse. Unions ensure working men and women receive the pay and protections they deserve -- even if they aren't members. We know for a fact that the presence of unions in an industry drives wages higher for all workers, and creates benchmarks for benefits that the entire sector strives to match. States with a higher union presence typically see higher minimum wages, and increased competition among companies to offer the best pay and benefits to their workers.

In Wisconsin, where unionized workers were proven to make 11.7 percent more than their nonunion colleagues, roughly 130,000 union members have left their unions, and some unions have shuttered altogether after failing the annual "recertification" votes mandated by Governor Walker's "right-to-work" laws. In Indiana and Michigan, lawmakers have passed similar bills to prohibit union workplaces from charging non-union workers dues, undercutting unions' funding and political operations.

Throughout our history, we at Amalgamated have aggressively fought on behalf of workers, and taken every opportunity to defend their ability to protect their rights. In the 1960's, we introduced trust fund management services for unions, and later opened the Trust and Investment Services Division to serve union pension and benefit funds. In 1973, we stayed open through the weekend to give bail checks to striking Philadelphia teachers. As buyers turned to foreign-made cars in the 1980's, we offered dramatic incentives to domestic car buyers to support American auto industry workers.

Just this year, Amalgamated helped workers in Washington, D.C., California and New York become the first in the nation to secure a $15 minimum wage -- a move supported by an estimated 60 percent of Americans.

We believe it is our job as a good corporate citizen to protect the rights of both our own workers and the national labor force. It's not automation or technological advances cutting into workers' wages; it's decades of decline in the bargaining power of and respect for workers themselves. Restoring wage growth, and combating the endemic wage inequality plaguing the country, begins with empowering workers to fight for their rights and secure equitable treatment.

As New York City's first labor bank, we proudly stand with our country's working families, and will continue to advocate on behalf of a fairer economy for all workers.