I've always felt confident about the American history education I received in various public schools (my 12th-grade civics teacher Sharon Levin comes to mind). But after watching Sasha Reuther's riveting documentary Brothers on the Line, I realize that every education has a significant gap or two, and one of mine involved the fascinating and rich history of labor in America. 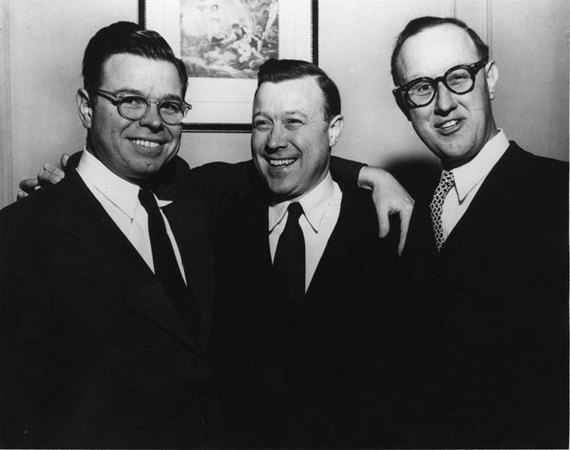 Mine eyes have been opened. Turns out, the Reuther brothers -- Walter, Roy and Victor (Sasha's grandfather) -- are the too often-unsung heroes of the American labor movement, which soon became a model for workers on a global scale. As union organizers who understood the crucial links to both education and politics, they improved the lives of millions of Americans; as a result, they deserve more than a sliver of credit for creating a thriving 20th-century U.S. middle class.

But getting to the 'good old days' took real work. Starting out on the brutal automotive lines in pre- and post-Depression-era Detroit, the brothers became intrinsically linked with the rise of the United Auto Workers; over the ensuing decades, they led strikes and negotiations, and often marched alongside counterparts both in parallel unions and in the Civil Rights movement. Throughout the years, their strong beliefs sustained them, even when various assassination attempts threatened to silence their voices or, at the very least, dampen their resolve.

Despite Sasha's family connection, Brothers on the Line is not a whitewash. Rather than sugarcoat the thorny issues he uncovered in his research, he exposes various criticisms and confronts them head-on. (Of particular fascination are Walter's close and complicated relationships with Dr. Martin Luther King, Jr. and President Lyndon B. Johnson.) The smooth narration of Martin Sheen -- no stranger to unions, he -- adds to the integrity.

Brothers on the Line is now available on digital platforms such as iTunes and Amazon. Trust me when I say this is a thrilling movie that does not feel like homework. Below, Sasha provides some insight into his filmmaking process. 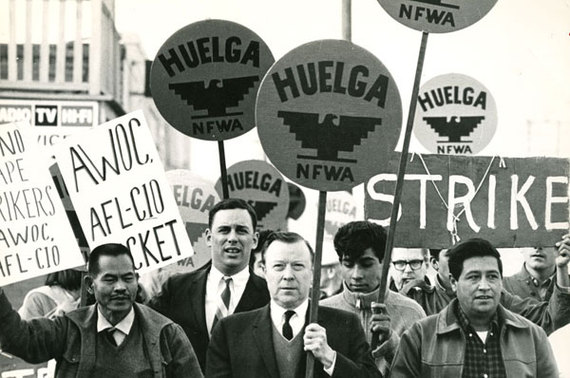 What motivated you to make Brothers on the Line?

Sasha Reuther: Well, aside from my intimate access to such a captivating group of characters and dramatic events that I knew would engage an audience, the film really came about from my sense of frustration that this crucial piece of American history was simply lost to my generation and younger. There was little if any Labor history in my high school textbooks. My peers had no knowledge of the Labor movement's contribution to the Civil Rights struggle, in building the middle class, etc.

Unions are tightly woven into the fabric of our nation, and that history has been buried. So I was on a mission to at least reintroduce my family's role in that important chronology.

During the filmmaking process, did you find anything that you really wanted to include, but could not fit into the film? What was the most shocking thing you learned?

Sasha Reuther: Where do I start? I could have easily produced a miniseries with the amount of stories I collected. The Reuther brothers were on the social/political scene for over four decades, playing a minor or major role in a wide variety of domestic and international activism. To name a few specifics, I wish I could have had more screen time to include accounts of the UAW's contribution to the "Arsenal of Democracy" in World War II; my grandfather's work with trade unions overseas; and the vital role of women workers and organizers in the labor movement.

The most surprising thing that I learned during my research was about the intimate relationship between Walter Reuther and President Johnson. I knew that the door to the White House was open, but after listening to the personal phone conversations recorded in the Oval Office -- some of which are included in my film -- it was quite eye-opening in regard to the tangled web of pressure and power politics. 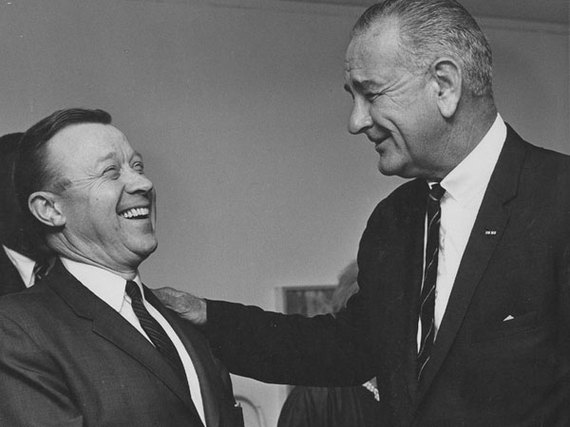 Walter and Roy both passed before you were born, but I imagine you knew your grandfather well. After researching the film, do you identify more closely with one brother than the others?

Sasha Reuther: Well, that's a tough question. I would imagine that I still identify most closely with my grandfather. He is often considered by historians to be the "conscience" of the Reuther brothers. Victor was an academic as well. I can relate to those qualities and interests.

I actually think Walter and Victor were quite similar in many regards. But, as an elected official, Walter was beholden to his membership and his political allies. I believe he reserved some of his personal leanings, and it must have been terribly disconcerting. My grandfather, however, was appointed to his posts, and therefore a bit more free to express his passions and progressive nature.

Some critics claim that, although labor unions had their place in history, they are no longer relevant in today's economy. What are your thoughts on this?

Sasha Reuther: One needs to look no further than WalMart to answer that question. They are reminiscent of what GM was like before the Flint Sit-down Strikes. A union in place at that company could not only attempt to rectify any number of workplace abuses (domestic and international), but also, raising the pay scale of their employees would actually benefit the bottom-line. A majority of WalMart employees spend a significant amount of their earnings on the living essentials stocked right there on those shelves. When UAW contracts were negotiated and autoworkers were finally able to afford to buy the cars they produced, our economy really had some traction. In a consumer economy, to have real growth, you need to raise incomes. 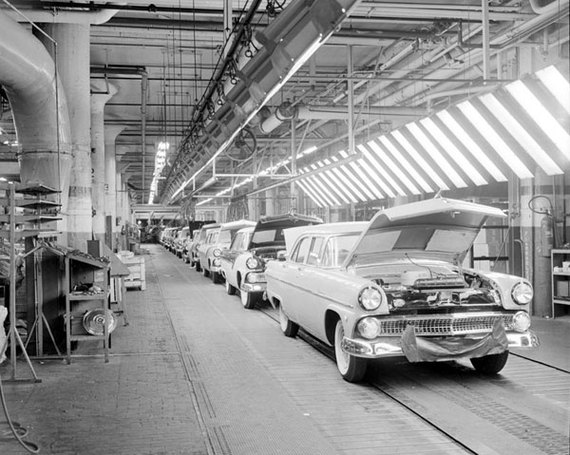 Brothers On The Line is primarily historical, but the Reuthers' story does indeed seem oddly timely.

Sasha Reuther: When I began this filmmaking journey in 2007, with the general goal of producing a Reuther biography, I could have never anticipated how timely their slice of history would become. At the time, the Big 3 manufacturers were on the brink. I was concerned that by the time we wrapped production, there might not be an audience for a little-known United Auto Workers history. But, as we've seen, from Occupy, Our WalMart, and fast food strikes to Supreme Court cases on campaign finance and voter rights (not to mention the auto bailout, Michigan right-to-work legislation, and Detroit's bankruptcy), there appear to be relevant footnotes to today's struggles throughout the Reuther Brothers' saga. For those who have had a chance to see the film, the most common response has been surprise that such a large slice of American socio-political history is so rarely discussed.

The film not only covers the major achievements of the Reuther brothers, but also at times brings into question their leadership and alliances. How were you able to balance this approach, being so close to the subject matter?

Sasha Reuther: I am really proud of the fact that I approached the documentary as a filmmaker first and a Reuther family member second. What I mean by this is that I knew the importance of taking on the subject matter with a critical eye, ear, and pen. 40+ years of Reuther history is by far too vast to cover in 80 minutes. But I believe we selected key events, decisions, actions, and emotions that fueled the trajectory of the three brothers through their careers in and around the Labor movement.

When it might have been unpleasant or uncomfortable for some in my family to know that I planned to portray Walter's tough and, at times, insulated leadership (especially when it came to dismissing former allies in the 1940s, frustrations with African-American shop-floor activists in the '60s, and his complex commitment to the Johnson administration), I pressed on. Having done so, it reveals a well-rounded portrait of the man and the stresses of his office, seated at the elite echelons of power.

For Brothers On The Line to be a captivating, educational film, I felt it was crucial to not only depict the tremendous achievements of the United Auto Workers union, but to also show a bit of the complicated inner workings of an organization that, through juggling so many issues, was, in some respects, literally transforming the nation.

Martin Sheen narrates the film. What was it like to work with him? What was his background as it pertains to labor and the history of the UAW?

Sasha Reuther: Working with Martin Sheen was incredible. He is a consummate professional and so passionate about American history. Martin has a long résumé of activism. His support of numerous farm worker struggles in California put him in direct contact with the UFW/UAW alliance. In fact, it was Paul Schrade, former UAW Executive Board member and west coast Regional Director, who put me in touch with Mr. Sheen.

I had been searching for quite a while for a great narrator for the film. I had just about given up when Paul gave me a phone number for what we thought was Martin's assistant. I left a message on the automated machine. Five minutes later, Martin calls me back himself! Here is this unmistakable voice from Apocalypse Now and The West Wing. I was a bit taken aback at first, but we had such a great conversation and connection over the phone that day.

Growing up, Martin considered Walter Reuther one of his biggest heroes, and I got the impression that he may have wanted to play the labor leader in a film someday. He was incredibly gracious about the family history, as I was about the possibility of working with an actor of his talents. Overall, it was a seamless and inspiring collaboration. 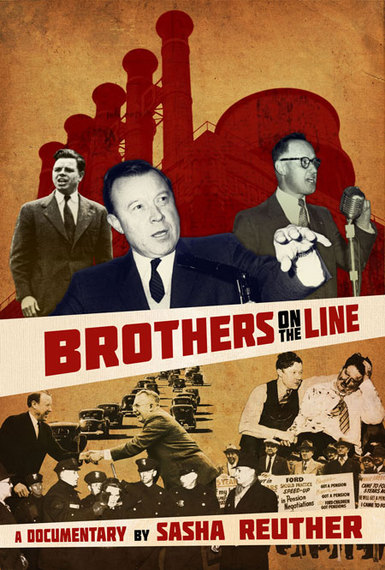 To finish things up, as a documentary filmmaker, what are some of your favorite documentaries -- classics and recent?

Sasha Reuther: To name a few, Harlan County USA, The Fog of War, Roger & Me, The Kid Stays in the Picture, Hoop Dreams, The Cove, 5 Broken Cameras, How to Survive a Plague and The Square.