We celebrate another Labor Day, a national holiday, and how do we remember it? I would like to remember it as some other developed countries celebrate it. France, for instance, has enshrined the one-hour lunch, whereas a 2012 survey of North American workers by Right Management found that only one in five reported taking a real break for lunch. Thirty-nine percent even reported they take lunch at their desks in the survey cited by columnist Robyn Blumner in the Tampa Bay Times.

The French don't have to worry, for they work less and actually produce more per worker. A new survey touted by Business Insider from UBS has shown that the French continue to work the least amount of hours per year in the world. Once again, the French have blown away the competition. Nationmaster ranks France as #18 in terms of GDP per capita, at $36,500 per person, yet France works much less than most developed nations.

And a recent visit to Amsterdam in the Netherlands, floored me. Stores can only stay open from 10-5 pm, except for Thursday when they are allowed to be open to 9 pm, and this in one of the commercial capitals of Europe!

As a percentage of national income, corporate profits stood at 14.2 percent in the third quarter of 2012, the largest share at any time since 1950, while the portion of income that went to employees was 61.7 percent, near its lowest point since 1966, according to the New York Times. In recent years, the shift has accelerated during the slow recovery that followed the financial crisis and ensuing recession of 2008 and 2009. 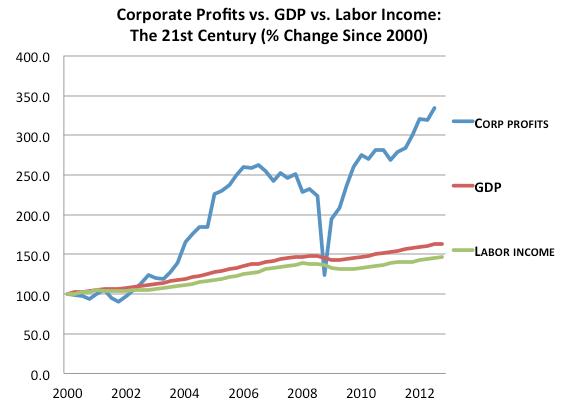 The legislative means are clear. Some 24 right-leaning Republican state legislatures have enacted right-to-work laws that actually prevent unions from either organizing, or requiring them to pay union dues, even though they receive all the benefits of unionization. This is not to mention the outright voter suppression tactics of ALEC, the American Legislative Exchange Council, a lobbying organization that has written many of those state laws

Judicially, we know that the Supreme Court's decision in Citizens vs. United allowed corporations to contribute unlimited amounts to elections, and with their record profits they have not hesitated to back those right-to-work laws.

So who is the richest country in terms of human capital? Perhaps, France that has the best health care and pension systems in the world, or the Netherlands with 10 to 5 working hours, or the country that diverts most of its profits to corporations, their CEOs and investors?