LAC-MEGANTIC, Quebec, July 6 (Reuters) - Thousands of people gathered in the small town of Lac-Megantic, Quebec on Sunday to remember the victims of a fiery crude oil train crash that killed 47 people and destroyed dozens of buildings in the picturesque lakeside village.

In the early morning hours, survivors and family marched in silence along a newly-built boardwalk, past construction rubble and across the train tracks, where exactly one year earlier the runaway train derailed and exploded into a wall of fire.

Hours later, politicians and dignitaries, including Quebec Premier Philippe Couillard, joined local residents in the St. Agnes church for the official memorial ceremony. Hundreds more, including an honor guard of emergency responders, lined the square outside to watch the service on screens.

"On the first anniversary of this tragedy, we express again the suffering that we live with and the pain that is still very present," said Luc Cyr, Archbishop of Sherbrooke, leading the service in the French-speaking town. "But in the middle of that personal and communal destruction, there is a rebirth underway, for this town and for its people."

It was in the early hours of July 6, 2013 that the brakes failed on a 72-car train parked uphill from Lac-Megantic, a quaint town nestled in Quebec's hilly Eastern Township region. Unattended, the train rolled downhill 11 km (7 miles), hit a curve and derailed near the waterfront.

The subsequent explosions leveled more than 30 buildings, including the popular Musi-Cafe bar, which was packed with late-night revelers and a live band. The fiery blast also destroyed homes, killing families in their beds.

One year later, a swath of Lac-Megantic's downtown core is still in rubble, with the slow pace of recovery frustrating residents, entrepreneurs and public officials.

At the epicenter of the crash site, where thousands of liters of oil leaked from crushed tanker cars into the soil, the ground remains too polluted for reconstruction. Displaced businesses are slowly being rebuilt a short distance away.

The community, shattered by the tragedy, is also slowly rebuilding. On Saturday, locals released young fish into the lake, planted flowers along the train tracks and set free hundreds of butterflies, according to media reports.

And a new monument bearing the names of all 47 victims was unveiled on Sunday, with Mayor Colette Roy-Laroche urging her community to find peace in each other and the natural beauty of their town, founded in 1884 on the shores of its namesake lake.

In the aftermath of the train crash, regulators in both Canada and the United States moved to shore up safety with a slew of new rules. Canada's Transportation Safety Board said on Friday that its final report would be released in the next few months.

The investigation has already led to criminal charges against the conductor and two other employees of the now-defunct Montreal, Maine & Atlantic (MMA) railway, and has also prompted Canada to adopt numerous safety measures, including the phasing out of older DOT-111 tanker cars by 2016.

After the incident, MMA went bankrupt and the line was purchased by a New York investment firm. Repairs on the tracks were completed last autumn and trains now pass through Lac-Megantic several times a week. (Writing and additional reporting by Julie Gordon; Editing by Marguerita Choy) 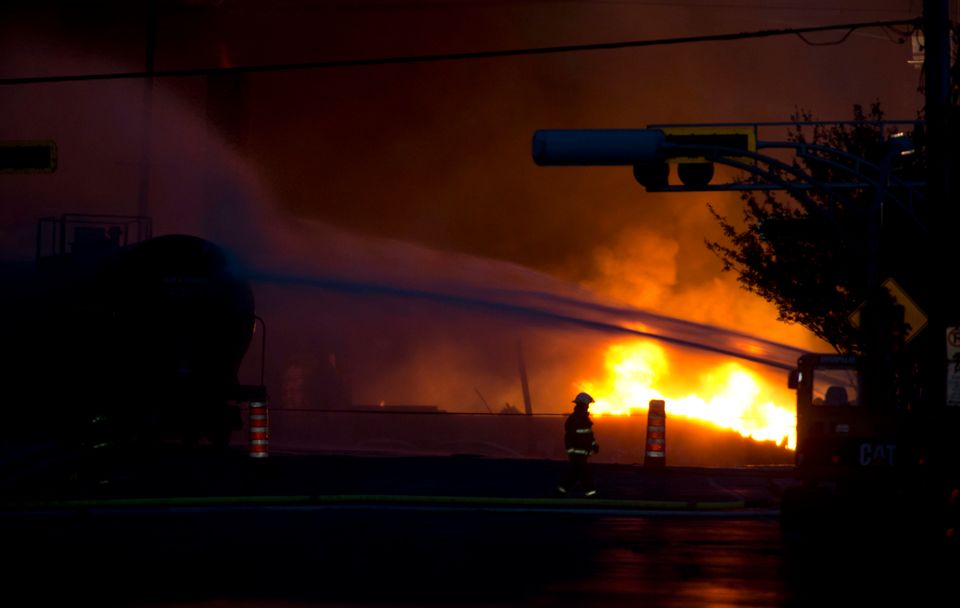