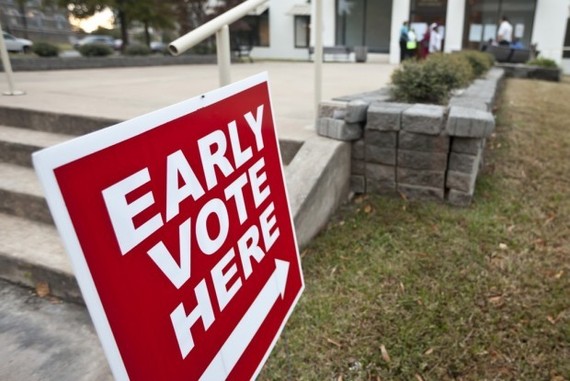 This election season, Hillary Clinton is 10-2 in primaries that allow early voting -- and one of her two losses came in Vermont, Bernie Sanders' home state.

Clinton is only 5-3, however, in primaries that disallow early voting but allow in-person absentee voting. Two of those five wins -- Massachusetts and Missouri -- as well as one of those three losses (Michigan) were virtual ties.

So it'd be more accurate to say that Clinton is 3-2-3 (three wins, two losses, and three ties) in primaries that permit in-person absentee ballots.

Whether it's a matter of the advanced age of many early voters, Bernie Sanders' poor name recognition relative to Clinton, or simply that when Clinton voters in a state are particularly enthusiastic about their candidate they tend to vote early, it's clear from the data (see below) that Clinton leads Sanders in the national delegate count in substantial part because of early voting margins that the Secretary couldn't match -- or even come close to matching -- on Election Day.

New York, like eight other states that have held primaries already, allows in-person absentee voting -- but, critically, few are making use of it. According to the most recent polling in the state -- a poll taken between April 4th and April 7th -- only 8 percent of Democrats have already voted. Yet even these figures are suspect, as a poll taken by CBS between March 29th and April 1st showed very different results: at that point, zero percent of New York Democrats had already voted (the actual number being closer to zero than to one percent). Is it possible that hundreds of thousands of Democrats voted absentee between April 1st and April 7th? Sure. Is it likely? No.

One explanation for the lack of early voting in New York -- besides the obvious hassle of coming up with and presenting an excuse for an in-person absentee ballot -- may be that, in fact, the group of voters most likely to vote early according to the most recent polling, African-Americans, actually, at least from a certain view, feels about the same about the two Democratic candidates.

To be clear, though Sanders is lately doing significantly better among nonwhite voters -- for instance, he leads Clinton by 32 points nationally among Latinos -- the polling in New York confirms that Clinton is still more popular than Sanders among African-American Democrats. The question is whether Sanders is actually unpopular within the African-American community or is simply slightly less popular than Clinton.

The answer is clearly the latter, as, according to the polling, if Clinton faces Donald Trump she'd win among New York's African-American population by 76 points.

And as it happens, that's exactly the percentage Bernie Sanders would win the African-American vote by in New York were he, instead of Clinton, facing Trump.

So this may explain the lack of urgency among at least one bloc of early voting-predisposed voters in New York.

(Side note: Clinton hasn't yet competed in a primary in which no early voting of any kind is permitted, but that's exactly what she'll face in three of the biggest and most delegate-rich primaries coming up: Connecticut, Oregon, and Pennsylvania. If the past offers us any hints, this category of primary may be the absolute worst one for Clinton -- a critical fact it seems no one in the media is discussing.)

So how much does Clinton rely on early voting to score primary victories, and how badly could a paucity of early voting hurt her chances of winning in New York? Well, let's look at how the numbers broke down in some other states (and I include caucuses here merely to show the striking consistency of the pattern):

Among Laramie County Democrats who cast their caucus ballots live -- at this past Saturday's vote -- the result was flipped, with Sanders winning the in-person vote 59 percent to 41 percent.

(Let's put aside for the moment the virtual statistical impossibility of what happened in Wyoming. In Laramie County, far and away the state's most populous county, fully 44 percent of caucus votes were absentee votes. These suspicious ballots -- "suspicious" because Wyoming has fairly strict laws about the circumstances under which you can vote early in a caucus -- are the votes that went for Clinton by 30 points.)

In Florida, the 36-point edge Clinton held in the first three weeks of early voting (February 15th to March 7th) dwindled to a 13.4-point edge among those who made their decision regarding who to vote for in the week before the primary.

And while hard data on early voting in Illinois is scarce, the early returns on Election Day there -- early returns tending to include a state's early-voting "data-dump" -- indicate that the swing in Clinton's birth-state may well have been as extreme as 30 points or more.

We find this same pattern elsewhere -- or, really, everywhere outside the Deep South. In the Deep South, Clinton's performance waned over time (that is, between early and Election-Day voting) but "only" by single-digit margins.

My own hypothesis regarding Clinton's oddly consistent command of early votes is that (a) Clinton doesn't generally wear well on voters, (b) Clinton benefits from Sanders' relatively low name recognition, as the polls generally show that three times as many voters don't know much about Sanders as say so about Clinton, and (c) Clinton benefits from the fact that older Democrats, who (like Clinton herself) are generally more conservative, not only tend to vote early but have been grievously misled by the media about Sanders' record on issues important to seniors.

I honestly don't believe that most American seniors know that Sanders wants to expand Social Security and Medicaid, or that he generally has between a 90 percent and 100 percent rating from the Alliance for Retired Americans, the National Council of Senior Citizens, the National Committee to Preserve Social Security and Medicare, and the National Active and Retired Federal Employees Association. Like much of the Sanders story, it can only be found in the mainstream media in fits and starts.

In that sense, it's a little like the oddities in early voting patterns this election season.

The question, now -- whether the media will cover it or not -- is whether the lack of early voting options in New York, be it fair or unfair, will put a roadblock in Clinton's way of the sort she hasn't often faced and may well be unable to overcome.

And if so, a further question is how Clinton will fare in the four states yet to vote that restrict early voting in the same fashion as does New York -- New Jersey, Kentucky, Delaware, and Rhode Island -- as well as the three large states with no early voting at all: Pennsylvania, Connecticut, and Oregon.

All told, these eight states will award well over 900 delegates in the next sixty days.