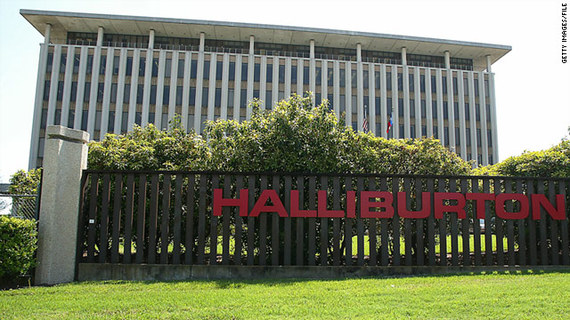 Squeezed by the sudden reduction of global violence, Halliburton announced yesterday the unexpected lack of war will be hurting their next profit report.

"We had been hoping for several good wars in the last few years, but with the Syrian dilemma ending in trade sanctions, Congress voting against ground troops in the Ukraine during the Crimea crisis, and now the Iran Deal suspending even more war in the middle east, we are looking at a bit of a war drought," said a company spokesman.

Dick Cheney, an expert in starting and maintaining wars, reiterated the need for a proper war soon to balance the books and keep what he called 'the gravy train thing' going. "It's simple economics," he said. "You can't just rebuild infrastructure you haven't blown up, at a mark up, or house and feed troops that aren't there, where we dumped hexavalent chromium, if no one is going to be there to begin with."

Other executives have had it with what they call the 'Peace Problem.' "With diplomatic missions constantly breaking out it's made things very difficult for us," said an inside source. "We're not averse to being creative, arming small militias or even supporting civilian clashes, as long as it's an expensive conflict. We can adapt, we have children of our own to feed," she said.

Some war mongers are being more proactive, investing heavily in conflict experts who are brought in as negotiators and can take any decent peace-time agreement and find problems with it. Sands Pierce, a professional conflict expert from EndTime, Inc. says "It's not that hard, I just keep saying "no" to the most common sense things and 'no' again when all my demands are met." Sanders warns one does have to be a professionally trained obstructionist. "It can be exhausting. Normal people don't have the stamina to continually say 'no' to common sense."

Halliburton stays hopeful. "We know everything is cyclical," says a company spokesman. "We're hoping this peace-time isn't permanent. We invested a lot of money in man's inhumanity to man, and aren't about to give up on it yet."