Up to 1,000 people were evacuated in the community about 250 kilometres east of Montreal.

It was not immediately known whether there were any casualties.

Quebec provincial police Lt. Michel Brunet said it was too early to say if anyone was dead.

"We're told some people are missing but they may just be out of town or on vacation," Brunet told a news conference.

"We're checking all that, so I can't tell you at the moment whether there are any victims or people who are injured."

"It's terrible," Bedard said. "We've never seen anything like it. The Metro store, Dollarama, everything that was there is gone."

Some of the train's 73 cars exploded and the fire, which could be seen for several kilometres, spread to a number of homes.

"The flames in the sky were really impressive," said resident Pierre Lebeau.

A large but undetermined amount of fuel also spilled into the Chaudière River.

Several neighbouring municipalities, including Sherbrooke and Saint-Georges-de-Beauce, were enlisted to help Lac-Megantic deal with the disaster.

The train belongs to Montreal Maine & Atlantic, which says on its website that it owns more than 800 kilometres of track serving Maine, Vermont, Quebec and New Brunswick.

The train was reportedly heading toward Maine.

The cause of the derailment was not immediately known.

Environment Quebec spokesman Christian Blanchette said the 73 cars were filled with crude oil and that four were damaged by fire and the explosions.

"Right now, there is big smoke in the air, so we have a mobile laboratory here to monitor the quality of the air," Blanchette said in an interview.

"We also have a spill on the lake and the river that is concerning us. We have advised the local municipalities downstream to be careful if they take their water from the Chaudiere River." 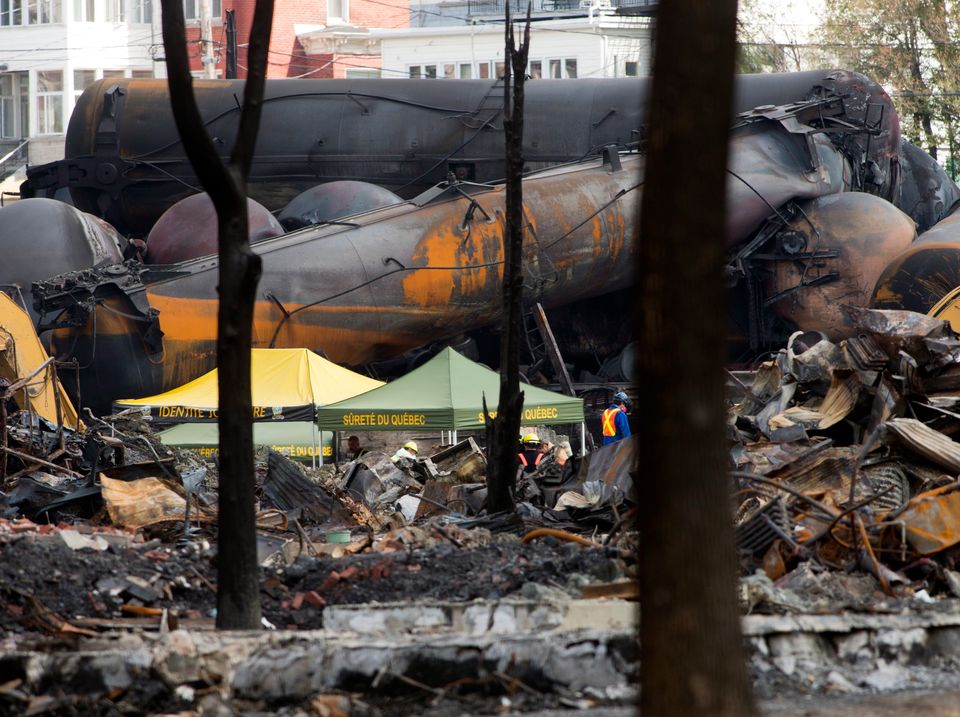 1 / 94
Work continues at the crash site of the train derailment and fire in Lac-Megantic, Que., on Tuesday, July 16, 2013, that left 37 people confirmed dead and another 13 missing and presumed dead.
THE CANADIAN PRESS/Ryan Remiorz