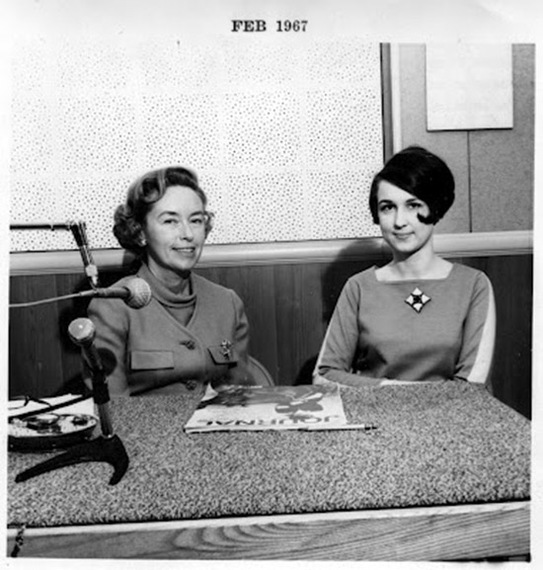 I read with sadness, but not with surprise, last week's news that the venerable Ladies Home Journal, after 130 years of advising women on such subjects as cooking, cleaning and "Can this marriage be saved?", will cease monthly publication in July, lay off the 35 people on the staff and move production from New York to Des Moines, although the Meredith Corporation will publish a quarterly, newsstand-only, special-interest publication as well as a website to keep the magazine's brand alive.

My first glimpse of the heady world of women's magazines was in June of 1961 when I won Mademoiselle magazine's Guest Editor contest and was transported, along with 19 other coeds from around the country, to the Barbizon Hotel (no men allowed above the ground floor), where we found a red rose on the bed in our tiny rooms with a month-long schedule of glamorous events that bore no relation to a real job.

The editor of MLLE was the legendary Betsy Talbot Blackwell, the mother of the makeover. She was one of the last of what I call the Pleistocene Era of magazine editors -- a group of eminent women who, early in the 20th century, ruled their kingdoms with the proverbial iron hand in a velvet glove. (I suspect that very few of these early triple-named lady editors would fit into a size six, much less size zero dress.) They dictated to the women of America what to wear and cook and how to behave, and the women of America took their word as gospel. (I have a very early issue of Ladies Home Journal that warns its readers sternly: if they dye their hair they will go insane.)

In 1964, when I set out to find a magazine job in New York, armed with a B.A., a Phi Beta Kappa key and a Master's degree from Columbia's Graduate School of Journalism, I considered myself a Serious Journalist. So naturally I applied at the Time/Life empire. A nice woman in Human Resources told me, "If you really want to write -- to be a reporter -- then you shouldn't apply for a job at Time/Life because women here cannot get higher on the masthead than researcher."

I did not protest in outrage nor hunt for a lawyer, because this was 1964. I gathered up my resumé and my portfolio, thanked her for her honesty and went to look elsewhere.

After six months of a public relations job for Lever Brothers in their iconic Park Avenue glass building, I moved a few blocks uptown to work at Ladies' Home Journal, at 54th and Lexington (across from what would be Studio 54 where Andy Warhol and Truman Capote played.) I considered myself lucky to land a job as an assistant in the Food Department. My salary was $80 a week.

I worked with two other young women in a windowless room next to the LHJ Test Kitchen, where I wrote articles like "A is for Apple", how to choose a ripe melon, and an occasional restaurant review. Shortly after the Beatles invaded New York in 1964, our kitchen became a popular gathering spot because word got around that you could scrape the insides of banana peels, toast the result and get high smoking it. Mellow yellow! We tested and puffed, but it didn't work.

The new editor of LHJ was boy wonder John Mack Carter, a dynamic, modern editor-in-chief, but many of the women I worked with had served under the old-school editorial team of Bruce and Beatrice Gould, who ruled the roost from 1935 to 1962. My colleagues shared tales of serving at the Gould's cocktail parties, laundering their clothes and -- strangely -- cleaning Mrs. Gould's pearls.

My immediate boss at LHJ was a celebrity food editor -- Poppy Cannon. She was known for many things including The Can-Opener Cookbook and her multiple husbands, among them Walter White, the founder of the NAACP and Chef Phillipe of the Waldorf. Her sister was the designer, Anne Fogarty.

Poppy was, as she often told us, the first woman elected to the Chevaliers de Tastevin. She would occasionally organize wine-tastings in the LHJ food kitchens, and I would assist. She would take a mouthful of wine, roll it around in her mouth, then spit it out into a silver cup before cleansing the palate with a little bread and going on to the next wine. My job, which did not really require a master's degree or a Phi Beta Kappa key, was to hold the cup into which Poppy spit.

Poppy was a glamorous and, yes, Amazonian woman who liked to wear long, sweeping dresses and matching turbans which increased her height to well over six feet. She often displayed various medals on her ample chest, pinned to sashes like royalty. She was, in fact, very sweet and not intimidating like Meryl Streep's Miranda Priestly in The Devil Wears Prada, but Poppy was rather needy and helpless when she was between husbands.

She often didn't feel like coming into the office, so I would have to go to her Park Avenue home. While she reclined on a chaise longue, wearing one of a dazzling wardrobe of peignoirs and muumuus, she would dictate her column for the magazine while I took notes. During the whole time I knew Poppy, the stove and oven in her kitchen did not work, so she would send me out to get lunch for both of us. And usually she had no cash on hand, so she'd tell me to expense it.

In the end, I wrote many of her articles myself, because after a while I got the hang of her uniquely florid style. Poppy also once invited me and a colleague out for a weekend at her house in West Redding, CT. We were driven in style by a car and chauffeur, but it turned out that we were there to clean the house and serve at the table.

In my early years on MLLE and then LHJ, I met a number of glamorous, larger-than-life women from the post-Pleistocene generation whom I call the Best of Everything editors -- because they are the ones Rona Jaffe was writing about in her novel of that name. They belong on the list of visionary, intelligent, glamorous and sometimes impossible women who carried the torch in an era when Ladies Home Journal staff members were given aprons with the slogan "Never underestimate the power of a woman."

There was Bruce Clerke, my personal editor at MLLE in 1961 during the month I was a guest editor. She was later the beauty editor of LHJ when I was hired there. She suffered my Midwestern naiveté with great good humor and tact, as when I tried to drink the shrimp cocktail at La Fonda del Sol during our first lunch. Bruce was a beautiful southern belle, (a college Azalea Queen, if I remember correctly).

The fiction editor at LHJ was Phyllis Levy, a slender and vivacious woman who entranced a series of men but, to my knowledge, never married. (Her good friend Rona Jaffe wrote about Phyllis's chameleon personality in the story "Rima the Bird Girl.") One morning, as I was answering reader mail in my closet off the test kitchens, Phyllis dashed in clutching a bottle of champagne and a tin of caviar. "Put this in the refrigerator," she commanded. "I met the most fabulous man and he's flying me to Paris tonight." This, I mused, was more like the job I had imagined than the reality of holding a spit jar at a wine tasting.

And the late Lois Benjamin Gould was the first editor to stride into the office wearing a pants suit. She looked thin, tragic and beautiful. Our jaws dropped. Anything that Lois did, we knew, must be the Next Big Thing. I believe this was after Lois's husband had died and she dropped out of sight for about a year while she wrote Such Good Friends about discovering her husband's adultery-- another "fiction" book, like The Bell Jar, Heartburn, and The Devil Wears Prada that was really faction.

At this time I was sharing an apartment on 14th Street with three young women, all in some form of journalism. Two were researchers on news magazines and, it's true, the female researchers were expected to travel with the reporter, to help, research, support and socialize with him, but never to write. In those days, believe it or not, nobody got by-lines on the articles in Time, except for columnists. Nowadays, everybody who has anything to do with a piece gets his/her name at the end. Which is only fair.

We each chipped in a dollar a day for food and took turns cooking. When Time closed on Friday nights, there was always a big buffet on the top floor and our Time/Life researcher roommate would bring home leftovers. There was no swag for magazine assistants -- certainly not the way there is today -- but I remember one Christmas when Restaurant Associates sent me a box made of chocolate with my named spelled out on the lid.

Once in a while the Fashion Department would sell off clothes at a bargain-basement price and I snagged a dress that was originally worn by Twiggy in a fashion spread. And recently my daughter, Eleni wore that same mini-dress to her job as a magazine editor.

Eventually I was allowed to move on from writing about food and got to do articles for the foreign syndication arm of the company, with titles like "The Royal Marriage-go-round" and "The Women Behind George Wallace." In the photo above from Feb. 1967 I was discussing one of my articles with Ruth Jacobs on the Jewish Home Show, while rocking a mini-dress and a would-be Vidal Sassoon hairstyle.

On March 18, 1970, at least 100 feminists staged a sit-in at the Ladies Home Journal, protesting the way the magazine's mostly male top editors depicted women's interests. They occupied the chief editor's office for 11 hours while the national media watched. They held prisoner my boss, John Mack Carter, and the managing editor Lenore Hershey. They even smoked JMC's cigars!

The feminists brought a mock magazine called Women's Liberated Journal and demanded articles on subjects like "How to get a Divorce" and "How to have an Orgasm" and "What to tell your draft-age son".

In the end, JMC agreed to let the feminists produce a section of the August 1970 issue. Later, in 1973 he left LHJ to be editor in chief of Good Housekeeping at Hearst Publications, and Lenore Hershey became LHJ's editor in chief -- one of the first women to head one of the "seven sisters" magazines, which had huge circulations, much larger than today's.

Unfortunately I wasn't there to see the historic confrontation, because by then I was married, had a baby and was working mostly at home, writing articles for the company's foreign syndication service.

So farewell, Ladies Home Journal! The magazine has long been out of touch with the women of America, who have far different interests and goals than they did during the Mad Men era when I worked there. But I can't help remembering those days fondly, even though we were vastly underpaid and under-respected in our jobs. And I still have the apron I wore in the test kitchen, printed with the magazine's slogan, "Never underestimate the power of a woman."