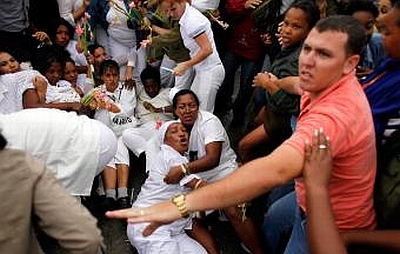 The Ladies in White, wives and mothers of Cuba's political prisoners, were attacked by a mob in Havana yesterday, as they peacefully marched to mark the 7th anniversary of the "Black Spring" arrests of 75 independent journalists and democracy advocates.

Tough times are coming. In the long term, I'm optimistic, but a sense of apprehension overwhelms me thinking of the years ahead. The accumulated frustration is too much. They have systematically sown among us the rejection of different opinions and this will not be erased overnight. Yesterday, when I saw a housewife vulgarly screaming, "the worms are rioting" - referring to the march of the Ladies in White - I thought about the long road to tolerance that lies ahead. Learning to debate without offending, to live together with plurality and respect for differences, will have to become a compulsory subject in our schools. It is going to be a long process to make everyone understand that diversity is a cure, not a disease.

I fear that the always-present shout and slap will remain the quickest way to silence the other. I shudder to imagine a Cuba where physical - and legal - attacks against people, for their political affiliation or ideological leanings, continue. What a sad country we will have if the authorities continue to consider it normal to "teach a good lesson" to anyone who contradicts the official viewpoint. To me, a society that passively stands by as peaceful women with gladioli in their hands are bullied, as happened yesterday, is quite sick. But the sectarianism did not end there, rather they sought to justify it and to accomplish that they prepared a script for the most mind-numbing program on Cuban television: The Roundtable. Viewers, however, after two hours of stoic listening, knew that in the absence of arguments they were left only with insults, defamation, and verbal acrobatics.

Why don't they have the courage to invite, to this dreary set where they carry on a monologue every afternoon, at least a couple of people who think differently? The most timid and laconic of the dissidents I know would expose them with a few questions and with some brief phrases would shatter their conspiracy theory. But they wouldn't dare. Sheltered by power - there is no worse ally for a journalist - their words and pens sustained by their perks and privileges, they know they could not withstand the artillery of criticism. Thus, they extol the beating, resort to slogans, and show some hand-picked videos to prove that differences must be crushed. And so they feed the fanaticism, this germ that threatens to survive long past their own lives: the legacy of hatred and distrust that they intend to leave to us.