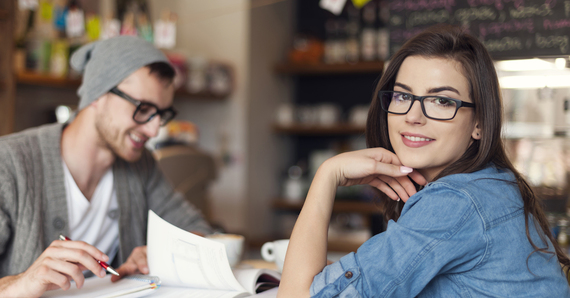 For anyone interested in gender issues and equality, 2014 was a very exciting year. There was the inspiring #HeForShe movement that UN Women Goodwill Ambassador Emma Watson kicked-off. There was the #LikeAGirl video by Always that highlighted the stereotypes associated with being a girl. And there were a slew of other movements (e.g., CatCall video, Carry That Weight protest) that drew attention to some harsh realities so many women today continue to face. It is truly great to see all of the men and women who are speaking out on these issues. After all, that is the only way we are going to create change.

As a woman and founder of a dating company, I am certainly someone with a particular interest in gender issues, especially in the dating space. Every day, I analyze and observe gender differences in dating, and it continues to amuse me just how differently men and women behave in the game of courtship. Everything from how often we like someone, to what we say is important to us (vs. what actually is important to us), to the type of first dates we prefer -- the list goes on. While most of these gender differences are harmless, there are some gender-based stereotypes and problems in dating that I believe need major adjustments. The most commonly discussed is how straight men often misbehave in dating websites/apps, treating women as sexual objects and acting entitled to a woman's attention (and getting very upset when it's not reciprocated), as wittily highlighted this year by the hilarious instagram account #ByeFelipe. However, straight women also perpetuate gender stereotypes. And the woman's role in gender relations are not nearly as commonly talked about. I have been quite surprised by the extremely traditional roles that many smart, successful, and driven women assume when it comes to dating, and the extremely traditional expectations they place on their dates.

"Men should take the initiative."
On Coffee Meets Bagel, the dating app that I started, we are lucky to have a member base of successful young professionals. In particular, very successful women. Over 40 percent of our female members have Masters degrees or higher and almost 100 percent have Bachelor's degrees. They work in variety of different fields ranging from Finance to Design to Tech. One of the most common complaints I get from these successful, driven ladies is that guys don't take the initiative. Let me give you a specific example. On Coffee Meets Bagel, we use our proprietary algorithm to introduce one match a day at noon, someone who we believe would be a good fit. If there is mutual interest (i.e., both people click "LIKE"), we open a private chat line where they can chat for 7 days (this is to ensure safety). Of course, dating being a cruel game, even if two people "LIKE" each other, there is still the question of who will start the conversation first. This is where I often hear my own female friends and customers complain that "guys don't initiate." When I ask, "How about you? Did you say something?" most of the time the answer is "No." Naturally, I follow up and say "Why don't you try saying something first?" Most of the time they say: "I don't want to say something first."

I typically stop the conversation here, but what I really want to know is why? Why wouldn't you say something if you wanted to have a conversation with your match? Why do you feel the need to wait for men to say something first? I looked at the latest one million private chat lines we opened up for straight couples who mutually LIKED each other. Only 27 percent of conversations were initiated by women. All of the rest were started by men. Further, on the rare chance that women do initiate the conversation, they take a lot longer to do it. On average, it takes a woman 182 minutes to make the first move versus men who take an average of 149 minutes. (As a comparison point, gay women take on average 97 minutes to send the first message and gay men 63 minutes.).

Dating is scary because there is always the risk of rejection. Making the first move is scary because you may get ignored. But it's nerve-wracking for both men and women. Is it fair to put that burden on men? This example may seem trivial, but if women continue to expect men to "man up" in the dating world -- ask us out first, message first, call first -- how can we expect to be liberated from the stereotypes that women should be more "ladylike"?

"Women shouldn't be so forward."
Another time that I think women are not as forthright as they could (or should) be is when expressing their interest in someone. As I mentioned before, on Coffee Meets Bagel you receive one match every day. You only find out if your match LIKES you if you LIKE them too. And, if you PASS on someone, you won't find out if they LIKED, PASSED or MISSED you, therefore mitigating the fear of rejection. However, at times, we offer features that allow members to express their initial interest in someone -- that they LIKED you first. I hear anecdotally from a lot of our female customers (but not so much from men) that they HATE this feature. And I see this in the numbers too. Women are three times less likely to use this particular feature than men.

When I ask the ladies why they hate letting the men know that they LIKED them first, they usually say something along the lines of "because guys like the chase," "guys don't like aggressive girls," etc. While I don't know if those things are true, I do know that on Coffee Meets Bagel, a woman's chance of connecting with the man she LIKEs is four times higher when the guy knows that she is interested in him. So if women want to increase their chances of getting what they want (i.e., the men they are interested in), it is to their advantage to let him know that she likes him! But so seldom women do. Whatever happened to the "go-getter" attitude?

My point is that despite the leaps and bounds of progress we have made regarding gender equality, despite the well deserved changes and respect that many women rightfully demand in other areas of their lives, when it comes to dating, we still have a lot of work to do. If we, as women, don't want to live with expectations of how ladies should behave or look, we should equally refrain from having expectations of how men should behave or look. So ladies, next time you come across a guy you like, why don't you try asking him out first? Or the next time you go on a first date, why not offer to pay the full bill? It might feel scary or weird, but I'm willing to bet you will feel empowered and liberated.