Today, I want to talk about a few artists whose art made me stare, think, and wonder. I'm talking about artists whom I got the chance to meet in the last couple of weeks and ask some questions. And all of them are smart, eloquent, and courageous women. That's why I prefer to think about them as "Ladies Who Dare." 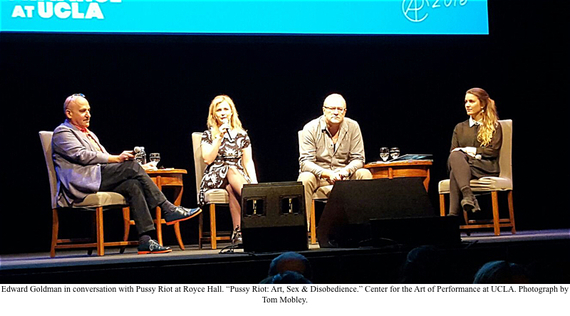 On the stage of UCLA's Royce Hall the other day, I spoke to two members of Russian punk group, Pussy Riot, famous for their riotous performance in 2012 at Moscow's Cathedral of Christ the Saviour, where they screamed, danced, and yelled "Mother of God, put Putin away!" Virgin Mary, unfortunately, didn't heed their prayer, but Mr. Putin promptly responded by having two of them arrested, tried, and sentenced to two years in prison. But even there, these ladies managed to fight authorities over the inhumane treatment of women in prisons by initiating and winning several legal battles. Today, the original members of Pussy Riot are joined by a number of other activists who fight for legal justice, which currently in Russia is in short supply. 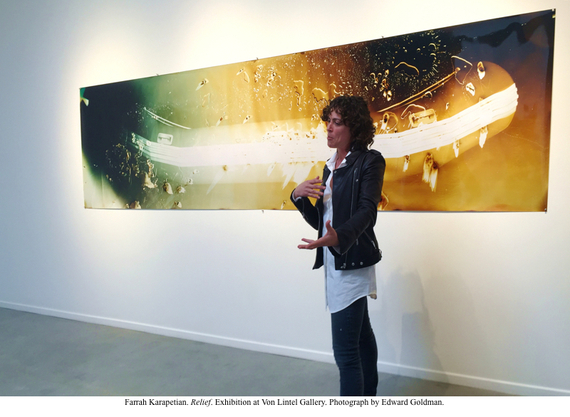 The Los Angeles Times review of Farrah Karapetian's exhibition at Von Lintel Gallery astutely states, "Mysteriousness is Karapetian's specialty." And indeed, looking at her unique works with their recognizable brushstrokes and splashes of paint, one wonders if these are photographs or abstract paintings. Some of them contain images of inflatable rafts floating in dark, dangerous waters. These photographs are made not with the help of a camera, but through an amazingly messy and adventurous process. Farrah puts various objects on a sheet of specially treated paper, shines light on them, splashes water --sometimes leaving ice to melt on top, --and happy accidents lead to magic. 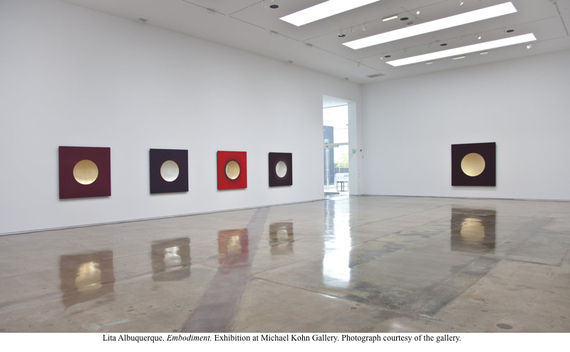 I've been following the career of well-known Los Angeles artist, Lita Albuquerque for close to three decades. And still, her art never ceases to surprise me. Her current exhibition at Michael Kohn Gallery consists of a series of mysterious monochromatic square panels, with silver moons and golden suns occupying their centers. But the longer you stare at her paintings, the more you realize that each color is far from monochromatic. There is a slow movement --something that I would describe as breathing --within each color. 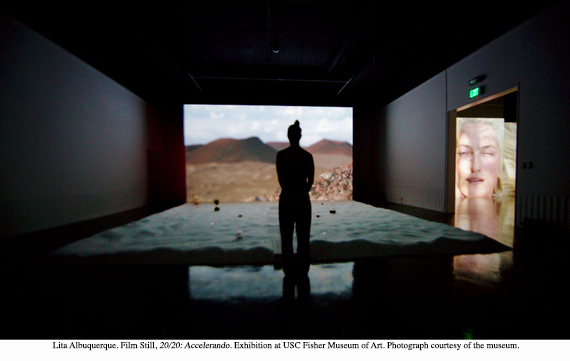 In a rare coincidence, there is another exhibition of Lita Albuquerque's art right now, this one at USC Fisher Museum of Art. For years, Lita has been travelling around the world to do projects spanning from Egypt to Antarctica. Her latest project, 20/20 Accelerando, occupies three of the museum's galleries: each has large-scale videos projected onto the walls. One gallery has its floor covered with several tons of white salt. 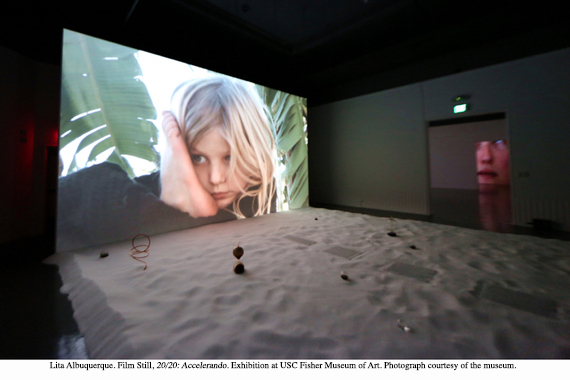 We hear the voices, and slowly understand that the mysterious story is about a female astronaut "on a mission to spread interstellar consciousness. Crash-landing on Earth, she forgets her mission, prompting her to embark on a journey of remembrance and self-discovery." 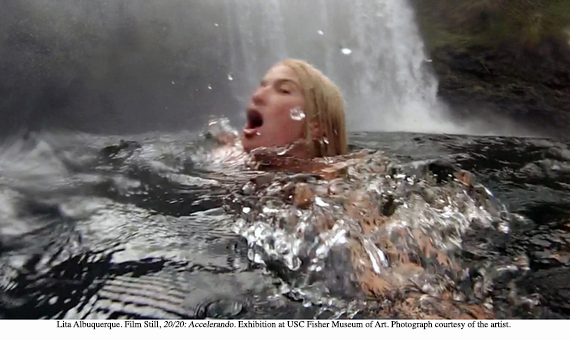 Once again, here is art that mystifies you and lets you experience moments of danger. This young astronaut we see gasping for air... is she drowning? Or is she emerging into the light at last --her life no longer in danger? As usual with Lita's art, many questions linger in the air... and it's up to us to find the answers.