The whole software space is considered a $200 Billion industry and growing-- Amazon Web Services alone is expects 70% quarterly growth with the latest numbers clocking in well over $8 billion in revenue per quarter making the market cap for software actually undetectable as there is no say where the line starts and ends. What is "software" now versus what is just normal business is becoming blurry, there's a lot of various tech products out there and it can be hard to tell software companies apart. One fearless leader thinks she can pick the best and that is An Le.

This month An Le moved into Dynamic Signal's new role as COO and their latest funding round of $25MM backed by Microsoft Ventures and Akkadian Ventures and this shift is no surprise. Formerly An Le was the VP and GM of Mid-Market at Dynamic Signal where she created the business unit that currently accounts for 20 percent of the company's total revenue. Given her powerhouse and 1/5 capacity at Dynamic Signal what is most interesting about Le is that she's actually silent executor. Her track record not only includes some big names like Intel and New Relic, it seems An Le is a professional software company picker.

Founded in 2010, pre An Le, Dynamic Signal created itself in a niche product space of software-as-a-service making several iterations as users, corporations, and communication leaders adopted the product in many different ways. Recently Dynamic Signal discovered a way to harness its tech to extend beyond community building and advocacy, but onto a larger landscape of corporate communications worldwide. Tapping into a company's networks and learning how to leverage one of the best network's that a company has, its own employee network. Dynamic Signal created the category of "employee advocacy" and after seeing the way that technology applied changed the way people communicated within a the company, their product has evolved and adapted into the leading company communications platform. 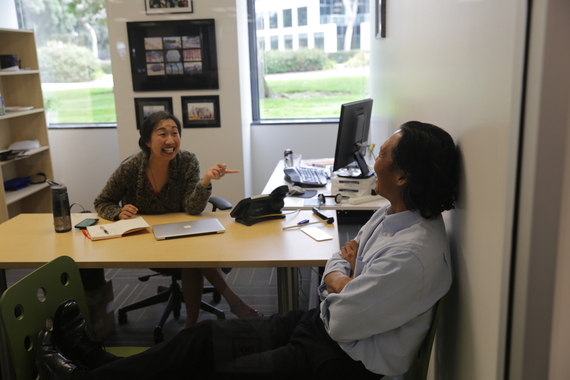 An Le with coworker Bong Suh, CFO of Dynamic Signal

This month Dynamic Signal announced new funding, executives, and international growth plans and the momentum appears to multiply, "Dynamic Signal is just one of those company's you run after the founder with a check in hand... you get so excited" When An Le speaks about Dynamic Signal, her energy doesn't stop there-- apparently Le is a well oiled machine. When looking at Le's track record it's less about Dynamic Signal and more about Le's ability to pick winners. Stanford Alumna and electrical engineering trained and Trinity Ventures polished Le has stats that do not lie: whenever she is at a company, that company usually receives two rounds of funding while under her watch. These funding rounds get bigger and bigger over time, the more An Le there is the more funding that follows.

While Le was at (the now publicly traded) New Relic, they received two rounds of funding totaling $25MM. While Le was at Yammer, $102MM in funding came to that now acquired company (acquired by Microsoft in 2012). With Dynamic Signal getting in about $50MM with Le on board it's clear she's on an execution path and Dynamic Signal her next bet. Le is not only fierce but understands precisely how to execute and maybe that's one of her most charming qualities: getting things done. Yesterday Dynamic Signal announced its latest funding and Le positions herself to do what she does best: make winners.

Dynamic Signal estimates that with better communication in the workplace, companies can be 30% more efficient and with 20% of Fortune 500 companies signing on to use Dynamic Signal the growth appears to be moving in the direction that Dynamic Signal is creating with its variations of corporate communications software. Already in 21 countries and 19 languages it appears that Le's bet on which software will be eating the world is clear. Now we will all have to see how Le turns Dynamic Signal into the next Yammer, New Relic or maybe even Microsoft.