It seems like only yesterday that the sharp-tongued Cathy Horyn briefly turned her attention towards Lady Gaga, just long enough to drop this bomb:

As funny and as fresh as Gaga was in her speech at the recent C.F.D.A. awards, she looked embalmed in the black Versace harness (apparently from Gianni Versace's final collection), and I don't know why Donatella Versace said she was honored by Gaga's selection...

Unsurprisingly, Lady Gaga was none too pleased about being referred to as "embalmed." So the former NYC prep school student has taken a most sophisticated approach to hitting Horyn back: she has penned her own op-ed targeting the New York Times fashion critic and her ivory tower, stating emphatically that "the hierarchy is embalmed."

Doesn’t the integrity of the critic become compromised when their writings are consistently plagued with negativity? When the public is no longer surprised or excited by the unpredictability of the writer, but rather has grown to expect the same cynicism from the same cynic?

In the age of the Internet, when collections and performances are so accessible to the public and anyone can post a review on Facebook or Twitter, shouldn’t columnists and reviewers, such as Cathy Horyn, employ a more modern and forward approach to criticism, one that separates them from the average individual at home on their laptop?

In five densely written paragraphs, Lady Gaga excoriates the high-ranking fashion critics for their overly negative yet fundamentally useless reviews, which fail to illuminate anything for their audience beyond their superior status as "experts." In short, Gaga writes, "Why have we decided that one person’s opinion matters more than anyone else’s?"

It's a good point, but also a well made point: Gaga is an excellent, clear-headed writer, the kind we would like to read more often.

Maybe after reading her memorandum, the New York Times will come calling and offer her a warring column with Ms. Horyn?

Now that would be interesting.

Read the entire thing on VMagazine.com and see a image of the memo below. 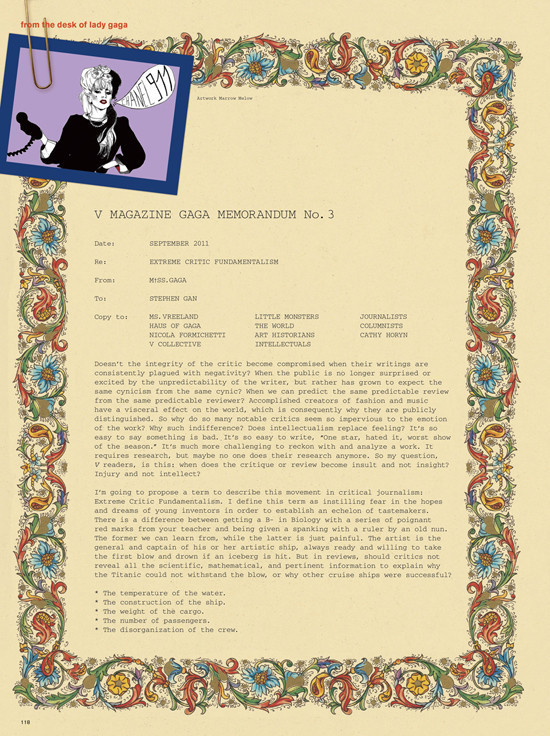