Soon to be vamping it up on a movie screen near you: Lady Gaga. Mother Monster has been cast in Robert Rodriguez' "Machete Kills," a film well known for its oddball casting. The singer apparently already put in work on the set, and has her own poster to boot.

The "Planet Terror" and "Sin City" director announced the news on Twitter Thursday:

I just finished working with @LadyGaga on @MacheteKills , she kicked SO MUCH ASS! Holy Smokes. Blown away! http://t.co/biYk3FwN

Gaga confirmed her involvement, reiterating that this was her acting debut (super-long music videos notwithstanding):

Yes its true, I will be making my debut as an actress ln the amazing MACHETE KILLS BY @RODRIGUEZ IM SO EXCITED!!! AH! Filming was insane.

Gaga plays La Chameleon and joins a cast that includes (deep breath) Amber Heard, Sofia Vergera, Zoe Saldana, Jessica Alba, Danny Trejo (Machete himself), and Alex Vega (who played one of the titular characters in "Spy Kids" and recently Instagrammed a photo of her risque costume).

None of these casting choices, however, are as surprising as Rodriguez' pick for the film's U.S. President: Charlie Sheen. Also rumored to be popping by? Mel Gibson.

The film, which is a follow up to Rodriguez' 2012 B-movie "Machete," has no release date. Trejo's character will reportedly be seen trying to stop an arms dealer from hastening the end of the world. Check out Gaga's poster below. 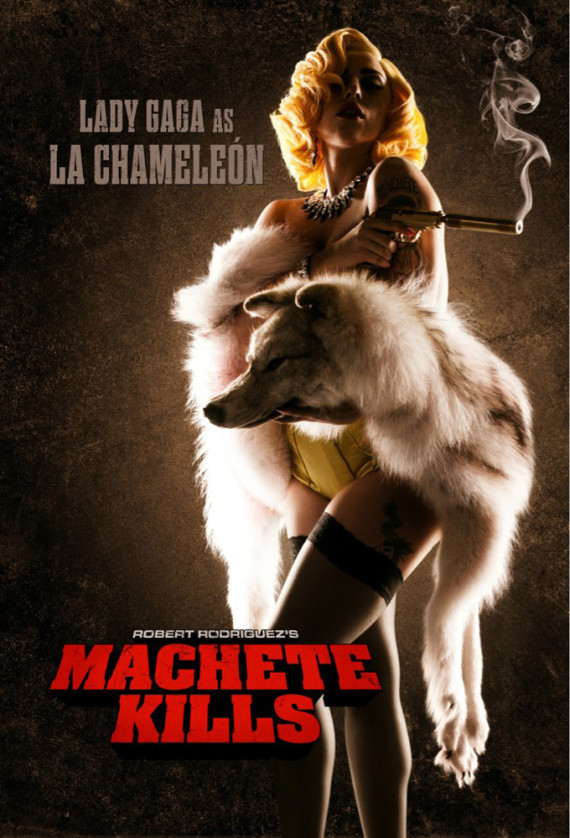