For everyone who's ever called Lady Gaga reductive (ahem), this shouldn't come as a shock: the pop star was recently slapped with a suit by a French performance artist, on charges of plagiarism. As reported by ArtInfo (translating from Le Quotidien de l'Art), the artist, Orlan, is asking recompense for what she sees as a suspicious similarity between one of her sculptures and the opening scene of Gaga's "Born This Way" video.

The requested damage is 7.5 percent of the profits from both the "Born This Way" album and video, or a current total of $31.7 million. Orlan also wants to halt sales of the album, according to the National Post.

The Post reports that the lawsuit accuses Gaga of using the same "plexiglass support, same square shape when it comes to the haircut, same facial implants, same decapitated heads," as Orlan's 1996 sculpture "Femme Avec Tête," or "Woman With Head" (which you can see here). 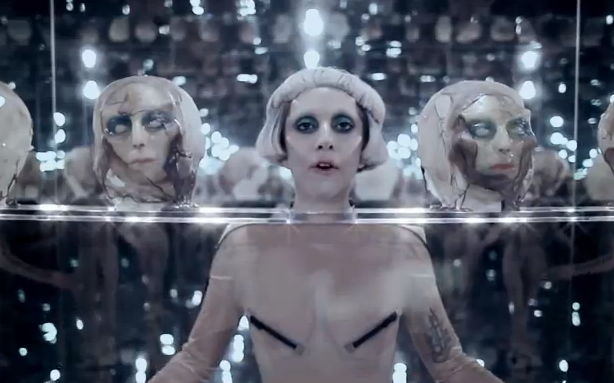 A still from the "Born This Way" scene in dispute.

Those "facial implants" are a sticking point between Gaga and Orlan. The French artist did them first and, in a sense, better -- where Gaga's notorious horns were cosmetic, Orlan actually had cheekbone implants surgically inserted onto her temples as part of a series of surgical "interventions" she staged in the early nineties as performance art. When "Gaga first stepped out with what the press was calling 'bizarre flesh-coloured facial horns,'" writes French blogger de Camille, there was little "shock or surprise" in France. "Many people in my Parisian circle immediately were reminded of" Orlan. A Tumblr, Gagaorlan, catalogues other artistic similarities.

As the Atlantic's Abby Ohlheiser points out, while homages are fair game in creative work, "ripping off someone's work" is not. "Orlan seems to think that Gaga's apparent, repeated references to her work are the latter," Olhheiser writes. As recently as 2011, however, Gaga claimed never to have heard of Orlan, according to an NME interview excerpted at Gagaorlan.

Such suits tend to be dealt with outside of court in tidy, hushed settlements, so it's difficult to turn to precedent. The most notable recent example of a mega pop star versus an avant garde artist comes from Beyonce's scuffle with Belgian choreographer Anne Teresa De Keersmaeker, who called the singer's 2011 "Countdown" video's blatant debt to her work "stealing," in an interview with the New York Times. De Keersmaeker didn't file a suit, however, and Beyonce's image didn't suffer much from the accusation.

We've rounded up other instances of pop stars taking from the art world, and either having to pay for it or getting off scot free. Let us know where you think Gaga's suit ranks on the list.

The Art Of The Steal