About five years ago, Lady Gaga burst into mega fame with the force of a shooting star (that insisted on wearing raw meat to red carpet events). But with her latest performance largely spotlighting vomit as performance art, it's all too easy to forget the moment when Gaga first rose into public consciousness, accessorized by Muppets and often compared to Madonna.

So, what happened? In just about five years, Gaga reached an unprecedented echelon of pop stardom, only to lose her mystery to such an extent that puke-for-attention seems almost standard. (She was puked on, it should be noted, by vomit painter Millie Brown.) In hopes of mapping the trajectory from fledgling stardom to bile desperation, we've tracked the rise and fall of Gaga's monstrous brand of celebrity.

Feb. 20, 2007 - Appearing in public for perhaps the last time as the human who once resembled Stefani Germanotta, Gaga attends the "Who's Next? Writers on the Rise" event in New York City.

May 19, 2008 - Gaga introduces her eclectic sartorial choices to the world at the NewNowNext Award, walking the carpet as a pirate from a future in which there is no cure for glaucoma. 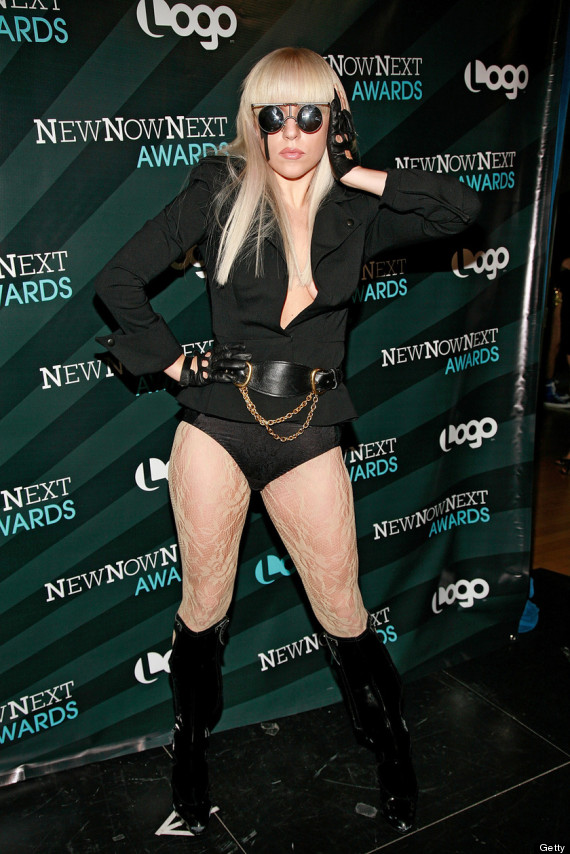 Jan. 20, 2009 - In an interview with The Guardian, Lady Gaga tells Laura Barton that she has "felt famous [her] whole life." Her confidence in place of feigned surprise over her success is refreshing.

May 11, 2009 - During a spot on "Ellen," Gaga begins her foray into absurd hats with "The Orbit," succeeds in confounding both Ellen and America.

Sept. 13, 2009 - One of Gaga's five generally outrageous outfits at the VMAs includes a red lace bridal headdress that is basically what would have happened if Carrie ever got married. 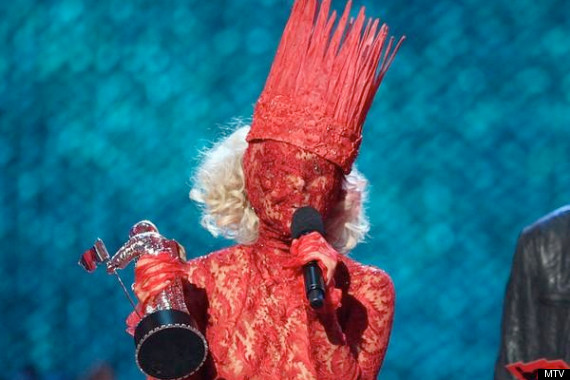 Nov. 18, 2009 - Gaga releases "The Fame Monster" as an extended play of "The Fame." It receives a Grammy nomination for Best Album of the Year and eventually wins her the Outstanding Music Artist Award at the 21st GLAAD Media Awards.

Nov. 27, 2009 - The Monster Ball tour begins, during which Gaga recently admitted she was bankrupt, having put the entire $3 million in her bank account toward the stage. 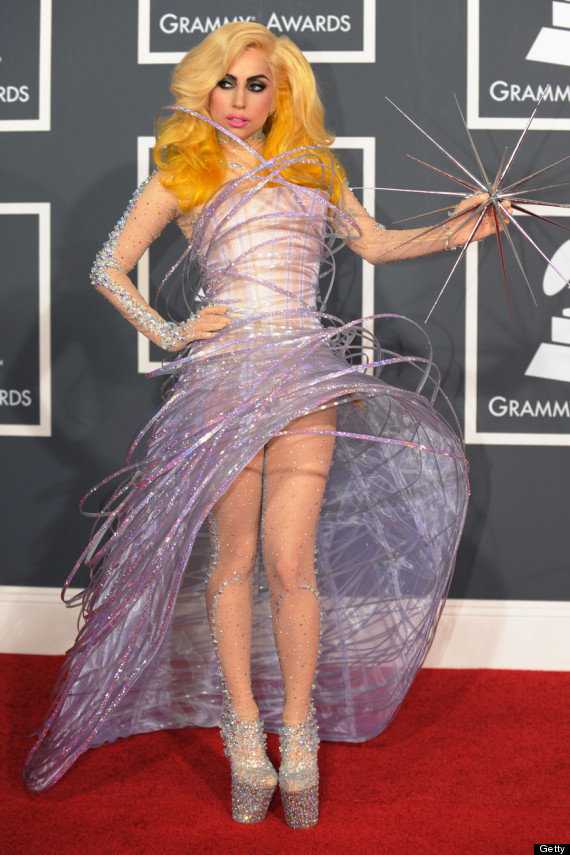 March 2010 - Teaming up with Beyonce, Gaga releases "Telephone," a mini-movie homage to Quentin Tarantino. It receives skeptical reviews, but succeeds in putting her on the map as a vaguely serious artist

Sept. 12, 2010 - Gaga wears a 50 pound meat dress to the VMAs. There are reports that the offal ensemble produces a foul odor. 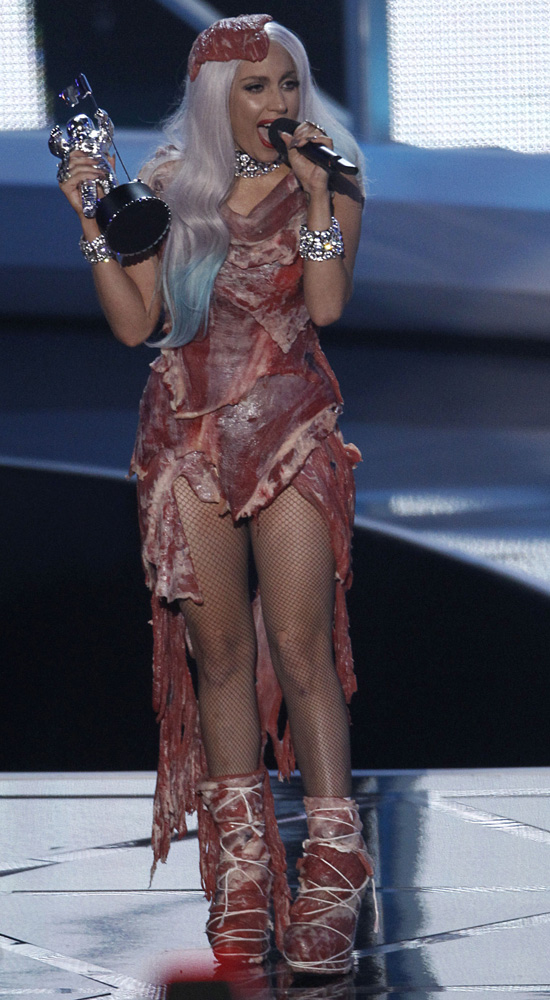 Aug. 28, 2011 - Gaga appears for her opening monologue at the VMAs, fully clad in her masculine persona: Joe Calderone. She later explains the character as a New Jersey Italian man who is "not a f--king guido."

Feb. 2, 2011 - Lady Gaga arrives at the Grammys in a giant egg. In an interview with Ryan Seacrest, she claims to have stayed in the "vessel" for 72 hours prior to the performance, because she "really wanted to be born on stage." 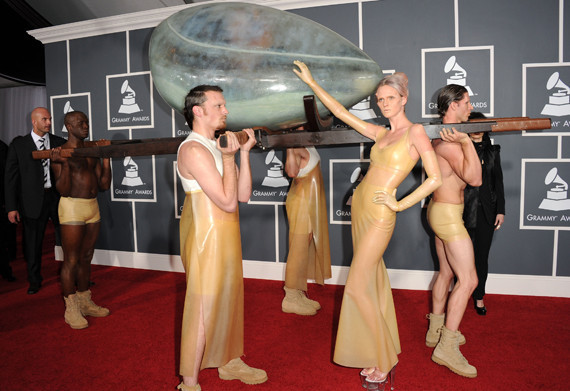 May 23, 2011 - "Born This Way" (the album) sells 1,108,000 copies in its first seven days on sale, making Gaga only the fifth woman to hit a million plus in one week. There is some controversy surrounding Amazon's decision to sell the MP3 for just 99 cents as part of a Cloud promo, although 700,000 sales were met at full price.

April 27, 2012 - Gaga begins her third concert tour, "Born This Way Ball," which quickly becomes one of the highest-grossing tours of the year.

Dec. 1, 2012 - In a conversation with fans via Twitter, Gaga reveals that she had already written "like 50 songs." for the then-forthcoming "ARTPOP."

February, 2013 - After postponing a number of dates, Gaga cancels the remaining shows, due to a labral tear in her right hip. She later admits (in really gruesome detail) that the hip was, in fact, broken.

November 6, 2013 - "ARTPOP" is released to disappointing sales (selling just a quarter of the copies "Born This Way" hit in its opening week) and lukewarm reviews.

Aug. 25, 2013 - Wearing a thong bikini for the majority of the 2013 VMAs, Gaga is still overshadowed by Miley Cyrus and a nightmarish Footlocker associate.

March 14, 2014 - Lady Gaga gets puked on at SXSW, because art (and later shares a post-show naked bathtub photo, because hygiene).

The Rise And Fall Of Lady Gaga
Lady Gaga