This week I had the pleasure of meeting up with famed New York cabaret songstress Lady Rizo on the eve of the first of two Portland, Ore. shows along her in-progress West Coast tour. We chatted backstage, and I took some photos while she transformed herself into the glamorous creature she was clearly born to be, a sultry, seductive woman whose stage presence, voice, and quick wit rendered me (and the rest of the room) completely speechless for the duration of the evening.

Lady Rizo is stunningly herself onstage, in one of the most authentic ways I have ever experienced. It is a gift possessed by few in this world, so if you have the opportunity to share in it with her, take it! I feel transformed by the spectacle of love, passion, and pure, unbridled talent I witnessed onstage that evening. I mean, who needs drugs with Rizo around?!

Do yourself a favor and get to know her right now. Mark my words: This woman is about to take over the entire world.

Here is our chat. 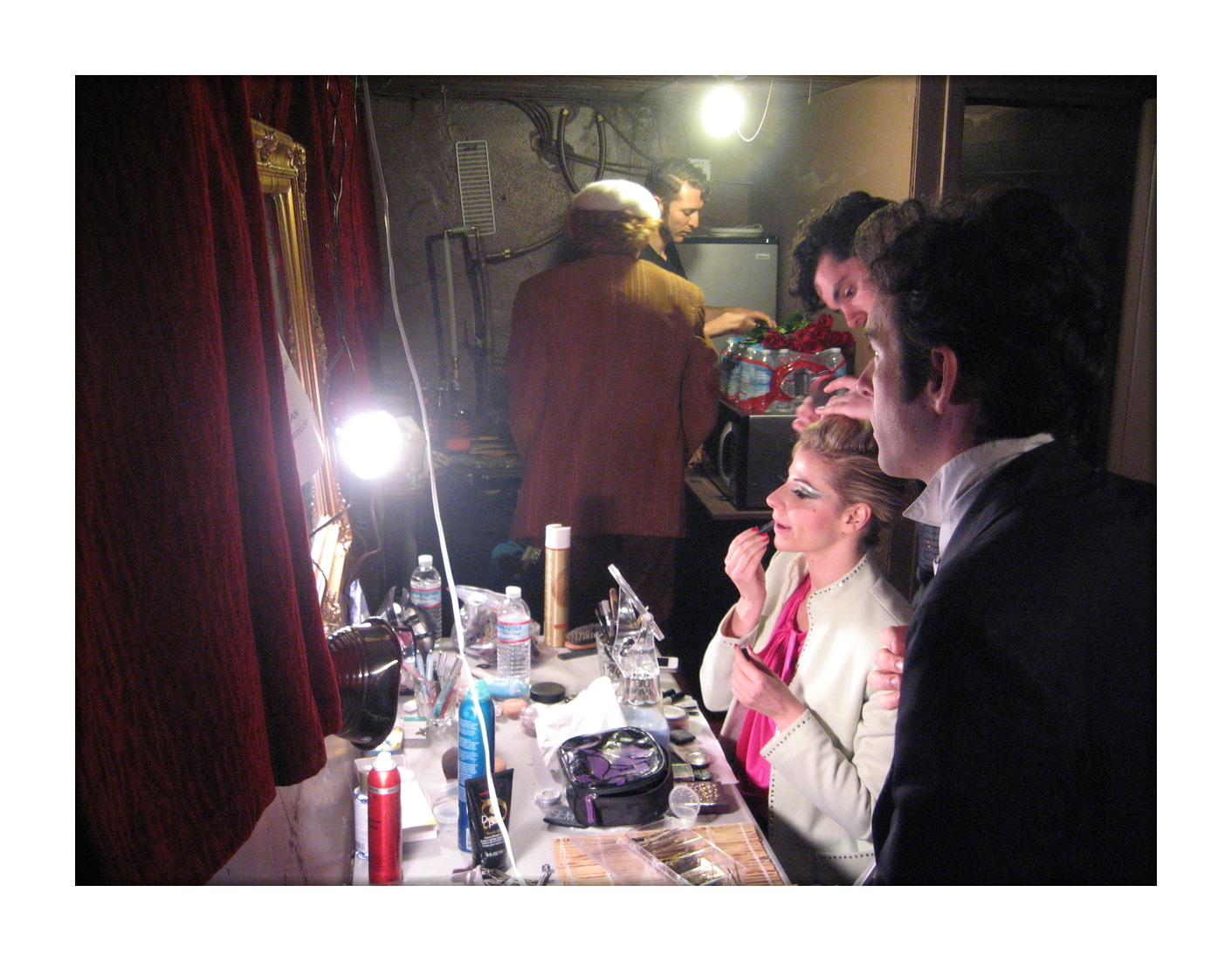 Hey, pretty lady! Thanks for taking some time to catch up with me before the show. For readers who may not already be familiar with you and your work, how would you describe what you do?

I am a singer, comedienne, chanteuse-y diva who performs in glamorous gowns and lashes. I theatrically explore pop and rock songs, write my own arrangements for them, and perform them in intimate cabaret settings. I have a dirty mind but usually deliver my humor bathed in a vague class that distracts you from the filth. I now also sing my own songs.

I enjoy your dirty mind very much. How is it being back on the West Coast? You're from around here, correct?

I love the West Coast. Yes, I was raised in an intentionally artistic community by a troupe of theater hippies on the Oregon beach. It always takes me a second to readjust to the slower, relaxed pace here and the fact that waiters will smile at you. But I love it -- and I love being a bridge between.

Right. Friendly servers is a real treat that comes with living here for sure. When did you move to New York? Did you move there with a mission, or has all of this come about organically?

I moved to N.Y.C. in 2004. Oh, yes, I had a mission: to continue my work as in the theater. However, when I moved there, I found that I needed to have a different game plan. I was not willing to play the role as a pleading actress, blindly sending out headshots and résumés in hopes that I could get an agent. I knew that bitterness and lack of control over my career would creep in and destroy what spark I had. I thought maybe I could perform in a cabaret setting, producing my own shows and showing my skills under my own terms. Then they would all be begging for me to come join projects. It worked eventually, but it took seven years. 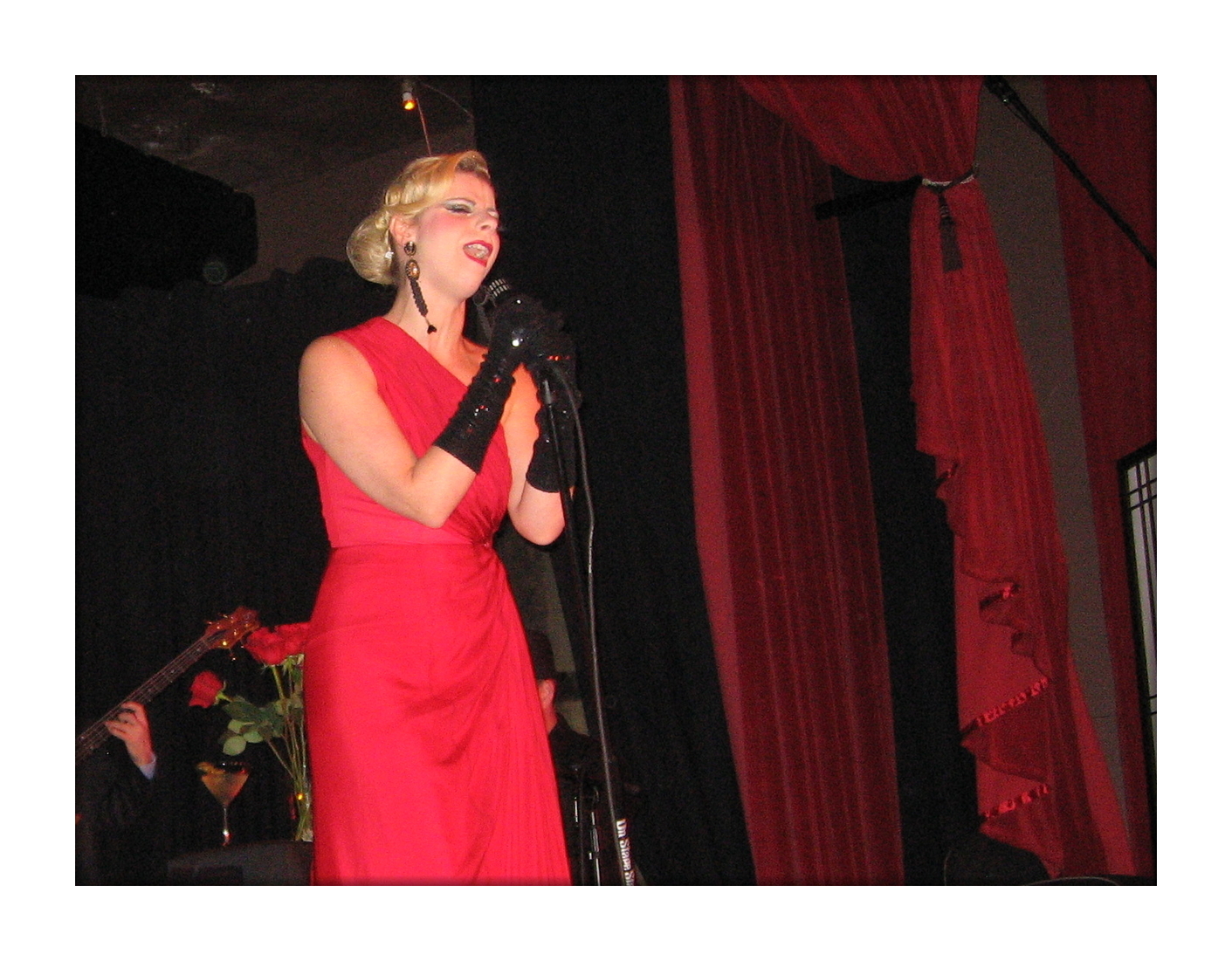 Seven years is a long time to stay focused on a particular vision. I'm really glad you stuck it out! Do you have plans to tour more this year, or are you staying put once you wrap up this coastal adventure you are currently on?

I'll be in Europe quite a bit this year. All of August I'll be at the Edinburgh Festival at the Assembly Room. I'm very excited, because it will open me up to a whole world market. Global domination! Also, I'll be there for Young Jean Lee's provocative theater piece The Untitled Feminist Show that I was a co-collaborator on last year. It premiered at the Walker Center and then had a sold-out run at Baryshnikov in January.

I can't wait for you to take over the world! Frankly, the world needs you and your spirit (fingers). Speaking of spirit fingers, you have quite the gay following. Do you consider yourself a queer performer?

Yes. Absolutely!! I don't often subscribe to heteronormative thought patterns. I surround myself with others who consider themselves queer. I don't rally against the mainstream as much as just live along side it... and the truth is, Lady Rizo is a decadently healthy temptation for all genders and persuasions.

Truer words have never been spoken. You starred in legendary performance artist Taylor Mac's The Lily's Revenge in 2008. How was the experience of working with him?

Taylor Mac is an American treasure. The Lily's Revenge was so bold, smart, inclusive, and enjoyable. Taylor asked me to do the show based on listening to my band rehearsal while he was taking a nap when we were both performing in the Motherlodge Festival in Louisville, Ky. When he said it would be a five-hour play -- to build the feeling of community -- I laughed with disbelief and said, "Maybe."

I really never thought it could be as amazing, wildly popular, and moving as it was. There was a palpable feeling in the rehearsals that every one of the 45 collaborators who worked on the N.Y.C. premiere knew they were working on something special. Is it obvious that I love Taylor? He is one the people that you suffer all the crap of New York City to be near.

I love Taylor, too... but I would add that you are also an American treasure, so maybe it takes one to know one. You've been the inspiration behind many successful singers coming out of New York recently. How does it feel to be in that role?

I didn't fully know this. I know that the work inspires many people but not specifically singers. The only thing that constantly pushes me forward is the thought that I artistically free up anyone. It makes me so happy. I know I need other brave souls to do that for me. 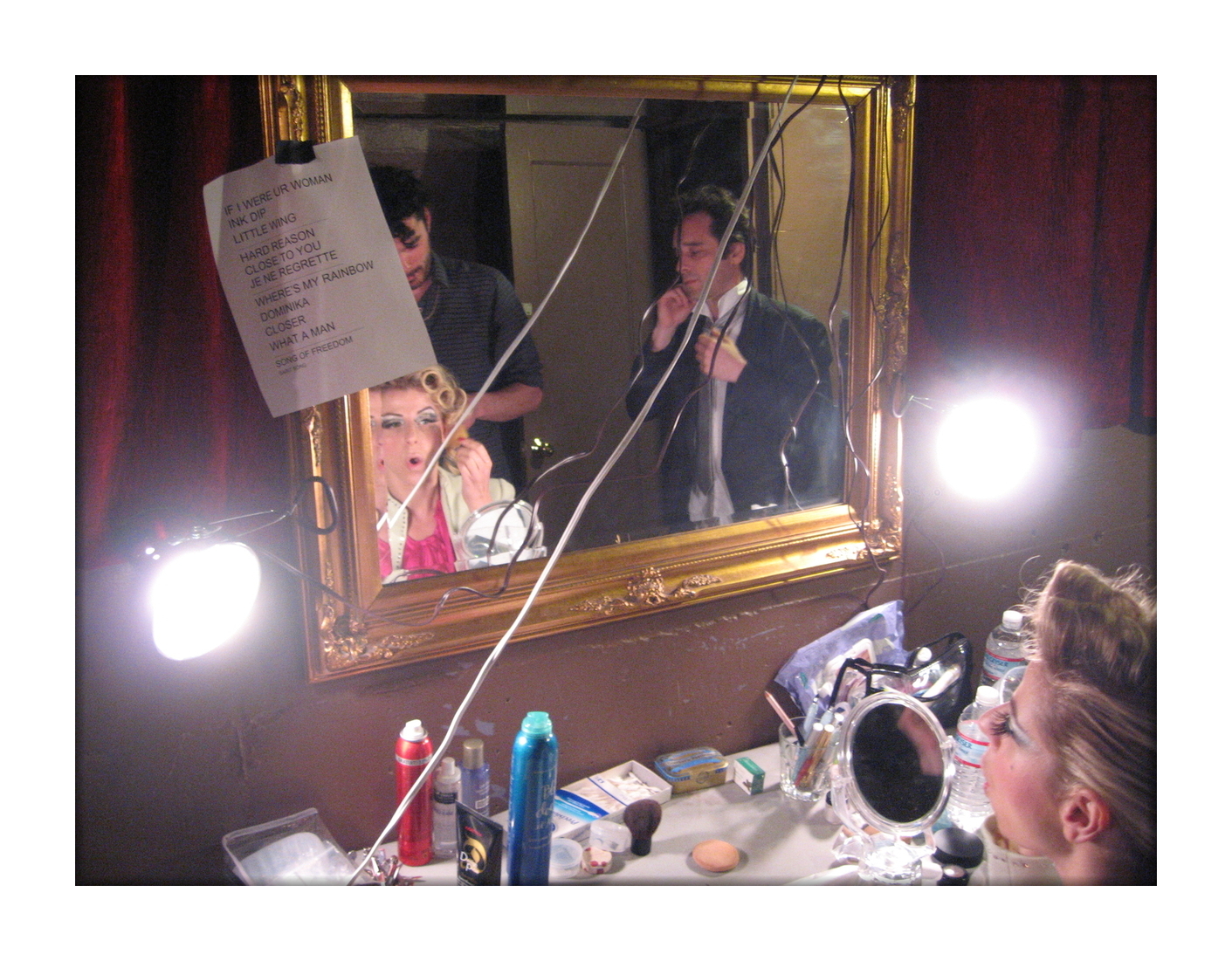 Nice. Well, now you fully know. While we are on the subject of singers you've inspired, Taylor Mac has been very open about how he feels about a certain pop singer also self-styled "Lady." What are your thoughts on Gaga? Is imitation the sincerest form of flattery, or do you wish she would knock it off already?

I applaud those pop artists that commit to a look outside of the box, but Gaga's music and stage performances don't excite me. It's hard to pinpoint what it is about her that makes me yawn, but I don't think my resistance to her is jealousy or possessiveness about the "Lady" title. (Though let's get one thing straight: I was a "Lady" when Gaga was a girl.) She doesn't perform in a way that inspires intimacy or connectedness with the audience -- or at least it doesn't connect to me. You can be a diva and reign on stage, but for adults, you usually have to earn it with respecting them first.

You are very gracious, and I couldn't agree with you more. Enough about Gaga, though. Who are some of the people who have inspired you over the years?

That is a lovely list of names. I can see parts of you in all of them, actually... or them in you. While we are on the subject of lovely things, what's love like for a supertalent like yourself? Are you singing about anyone special at the moment?

Love is good. My bed is warm. Always.

Warm beds are so important. Talk to me a bit about the new record you are currently touring. Who did you work with on the album?

The record is exciting. It contains a mix of new originals that I'm loving and arrangements of other songs I've performed in the last years. The feeling attempts to capture the varied styles I've been playing in while remaining true to my vocal signature. It ranges from cabaret stylings to '60s rock to Klezmer to old-fashioned R&B. I'm working with Yair Evnine, who I've collaborated with for many years now as a musician and songwriting collaborator. It's exciting to push our artistic relationship into the production side. We are recording the bulk of the album at a fantastic, old, carriage-house Brooklyn studio run by Ian Pai and Le Chev, who also work with Fischerspooner and Ssion. 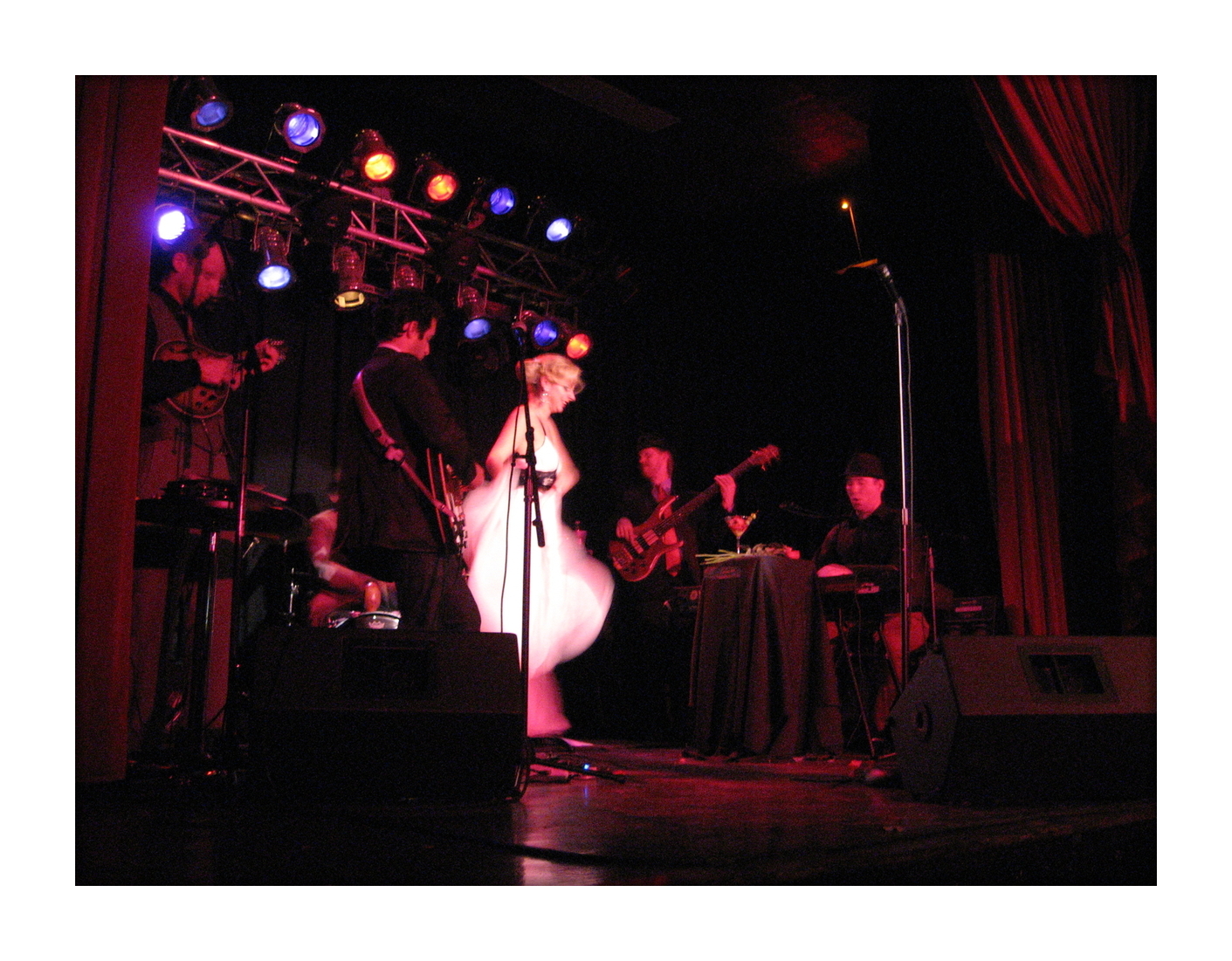 That sounds amazing. Any music videos on the way?

Oh, yes, of course. You can't survive these days without some solid content for the Interwebs. We have exciting videos in the works.

Yay! I am officially waiting with bated breath. If you could be someone else for a day, who would it be?

[Laughs.] Surely this is a joke question lifted from Teen Beat. I wouldn't ever want to be anyone else than Lady Rizo.

Good answer. I do read a lot of Teen Beat, so it creeps in every so often. I can't think of a single person I would like you to be, either... just hundreds of people I wish were more like Lady Rizo! Thanks so much for spending some time tonight, my dear. I should probably let you finish getting glammed up for the show and take my seat front and center. I wish you the best of luck on the rest of your tour and can't wait to see what the coming months bring your way! Any famous last words for our readers before you take the stage and dazzle us with your sparkle?

Spread your span. Raise your hands. Sing this song of freedom. Thank you for supporting live entertainment.