This is the twenty-seventh installment in HuffPost Gay Voices Associate Editor JamesMichael Nichols' 30-part series "After Dark: NYC Nightlife Today And Days Past" that examines the state of New York nightlife in the modern day, as well as the development and production of nightlife over the past several decades. Each featured individual in this series currently serves as a prominent person in the New York nightlife community or has made important contributions in the past that have sustained long-lasting impacts.

La'Fem Ladosha is an up-and-coming artist living and working in NYC.

The Huffington Post: What has the evolution of La'Fem Ladosha entailed?
La'Fem is the evolution of Dosha Devestation. She is the grown woman that girl I used to be grew into. She is everything that I am. We are the same person. Dosha Devastation was a mask. A costume. Once I accepted that she was my soulmate it made things a bit clearer.

Who is La'Fem Ladosha as an artist?
As an artist I consider myself versatile and flexible. I wish I could be a superhero or supervillian. I celebrate fantasy and beauty through both sides of myself -- as La'Fem and as Antonio. I like to explore the dark and gross. I'm a performer and crafter. I built myself -- I'm my own creation.

What is the House of Ladosha? Who is involved?
House of Ladosha is simply my family here in New York. It's my close friends and peers. The House is a collection of creative individuals and bad bitches -- most of whom I've known for ten years. It's started off as a ki ki and grew into something major, real and legit. I always knew it would be legend. My whole house eats!

How has collaboration factored into your work with House of Ladosha?
I honestly have never been a fan of the collab because I'm such a control freak, but I like working with my friends. I performed, of course, with my boo Adam Radakovich in the musical aspect of House of Ladosha and we were super in sync. If we're close, if we speak the same language and we're from the same planet then we could probably make some hot shit. I need to feel that kind of energy to really go ham and be comfortable. I'm so weird about what I do and don't do. I'm an artist and I'm sensitive about my shit just like everybody else. I'm not #OUTHERE jumping on shit because it's cute or I've been backed into a corner. I only do what I want to do with whom I want to do it with -- no shade.

What have your experiences been like in the New York Nightlife community? How has it helped you grow as an artist?
The freaks come out at night and I come alive in the night time. Nightlife has been super important to my rage because I made a lot of connections and I was #OUTHERE going hard. I've performed at every party and worked for everybody, like Frankie Sharp, Ladyfag, Susanne Bartsch and a gang of other people too. I never fit in anywhere back in Nashville and it wasn't until I discovered NYC nightlife that I finally found a space to be myself. At the end of the day it's fun and fantasy and people want to rage.

The Internet and technology have reshaped the way artists brand, promote and market themselves. How has the Internet informed and shaped the development of La'Fem Ladosha?
Well, people get information so fast now. One day I was Dosha Devestation and the next I was La'Fem Ladosha. No explanation. No questions. I just became her... and everybody was like, OK. The Internet is the greatest invention of all time in my mind. I'm legit never offline. I can't imagine a world without it -- it would be awful. It has allowed me to reach people all over the world. I've been able to create this persona and express myself with a level of comfort that I probably wouldn't do in real life. People see photos and videos and they feel like they know me.

Who in the NYC nightlife community has been most influential to the evolution of La'Fem Ladosha as an artist?
I have always lived for the beautiful black girls from the '90s, like Connie Fleming, Mona Foot, Princess Diandra and Lina Bradford. They were and are all so legendary and I always looked at their experiences and wanted it for myself. They were just so perfect to me.

How have you seen nightlife in NYC shape the careers and work of your collaborators and friends? What opportunities does it afford?
Everybody wants to catch their life and get up in that sunset, so nightlife provides a space for you to scream "look at me!"

You see everybody out. Everybody is at the function. I've met some of my best friends out and I've met some of my idols out. Different parties offer different things. Some parties provide a stage for you to shine and some are more low key. You have to start somewhere and nightlife/the club is always a good launching pad. It's definitely where I started and I bet some of your favorite artists all had their first show at some club or party. It's exciting to see new girls pop out and pop off. It's really beautiful watching someone bloom as a performer and artist -- it's one of my favorite aspects of working in nightlife.

What parties and gigs are you currently engaged in?
Well you can always catch ya girl at Frankie Sharp's Westgay and GIRLS at LoveGun. Also, every month at Ladyfag's Holy Mountain and sometimes her 11:11. KUNSTGIVING with Susanne Bartsch, and also Kunst in L.A. in December. I'm going to do a little show out in L.A. -- and a major surprise pop out for Christmas.

What does the future hold for La'Fem Ladosha?
I want so much more. I want my name to be a household product. I want everybody to look at me and say, "there goes La'Fem Ladosha."

Missed the previous installments in this series? Check out the slideshow below. 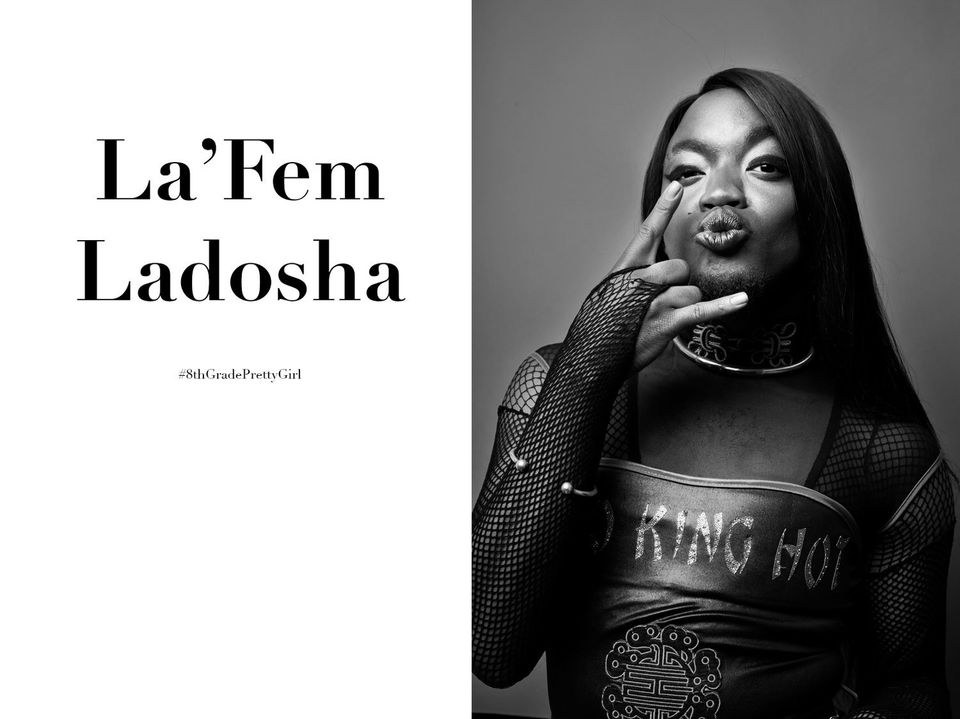