The Chauburji (literally, "four towers") once was the gateway to one of the largest gardens in the city of Lahore. Unlike other gardens there was no need for an elaborate canal system to irrigate this garden. The river Ravi flowed on its outer boundary, serving as its canal. Like the water from the river, the garden too has evaporated making way for an urban jungle. The Chauburji now serves as one of the most prominent roundabouts of the city. Behind this monument is the headquarters of Jamaat-ud-Dawa. It is a fortified structure with a tall boundary wall interspersed with bastions, manned by armed security guards. It is alleged that Jamaat-ud-Dawa is merely a front for the banned terrorist organisation Laskhar-e-Taiba, while Jamaat-ud-Dawa asserts that it is only a charity organisation, without explaining the reasons for the fortification and security guards.

Next to the headquarters were the last remains of the historical Jain Temple in Lahore, which was brought down in 1992 - in what was considered revenge for the destruction of the Babri masjid in Ayodhya. The turret that once adorned the skyline of Lahore was brought tumbling down, where it stayed ever since. However, the accompanying buildings of the temple remained, serving as offices and residential quarters. These were the last remnants of the Jain Temple of Lahore, before there were brought down by the Pakistani Punjab government to make way for the new metro-train, the first in the country. 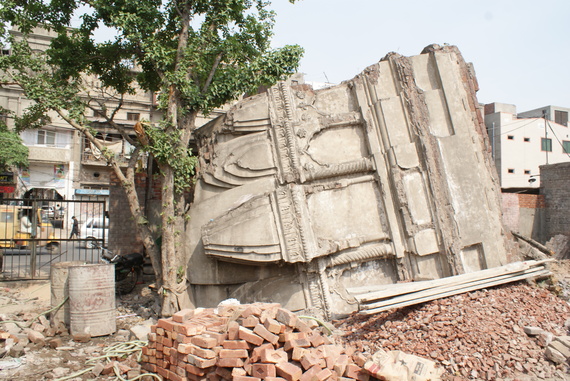 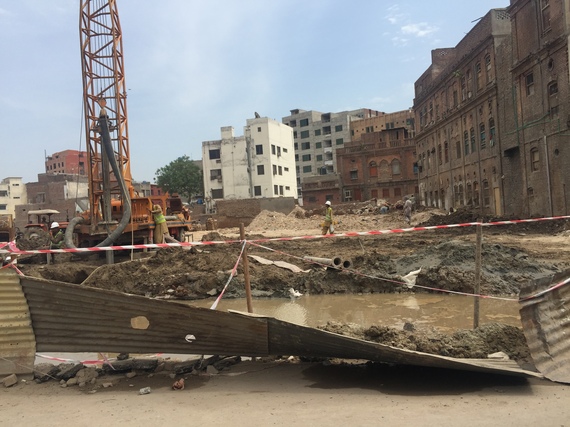 Ever since Mughal emperor Akbar, rulers have used Lahore as a symbol of their empire, raising grand architectural monuments here to show off their prowess. The Mughal emperors, one after another, constructed gardens in Lahore - the Shalimar Garden, Jahangir's tomb, Nur Jahan's tomb and Chauburji are all such examples, earning Lahore its title of "city of gardens". Most of these gardens survive but Lahore today is hardly the city of gardens it once was. It is an urban jungle hosting an estimated population of over 10 million people. The gardens have slowly been sprawled upon and survive as islands of serenity in an urban madness.

Whereas building gardens was the obsession of the Mughals, for the new rulers it seems to be flyovers, underpasses and roads. Pakistan Muslim League Noon has dominated Punjabi politics for decades and Shahbaz Sharif, Prime Minister Nawaz Sharif's younger brother, is Punjab's longest serving chief minister. Diverting resources from other parts of the province the infrastructure of Lahore is developed, projecting it as a symbol of prosperity and development. It won't be unfair to call Lahore the city of bridges now. It is this obsession of upgrading Lahore's infrastructure that has damaged the historical heritage of the city.

Whereas the remaining buildings adjoining the Jain temple have been destroyed, the Chauburji stands precariously. The civil society in Lahore has raised a lot of hue and cry about the threat to Chauburji from the metro-train project. The Chief Minister has reiterated that no damage would be wrought to this historical monument, citing that the flyover would be at a little distance from the gateway. Needless to say the Punjab government deems Mughal historical heritage as more important than Jain heritage, as the Pakistani state ironically views itself as a direct descendent of the Mughal Empire, the epitome of Muslim influence in a predominantly Hindu India.

I drove past Chauburji recently in order to assess for myself the damage wrought to the structure. A barren pillar stood close to the monument. Debris from the site was placed at the empty space in the vicinity of the Chauburji. A board next to it said that construction work has been halted at the site to protect the historical monument. The chief minister was right, the structure would not be razed for the construction of the metro - however, that statement lacked an understanding of preservation of historical monuments. Passing a high-speed train so close to a 400-year-old structure would add pressure to the already frail monument. Overtime, the monument is likely to be damaged by the vibration of the train. 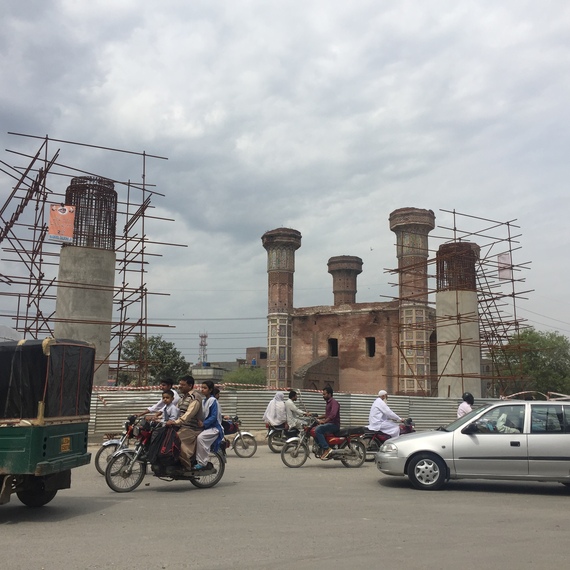 Standing at the Chauburji roundabout, observing the monument and the congestion of the traffic that skirted around the construction work, I felt pain for the tragic Mughal princess Zeb-un-Nissa, daughter of Emperor Aurangzeb. According to folk legend, the Chauburji garden was constructed by this Mughal princess. At a little distance from here is believed to be the tomb of the princess. It is a modest structure with a grave at the centre. 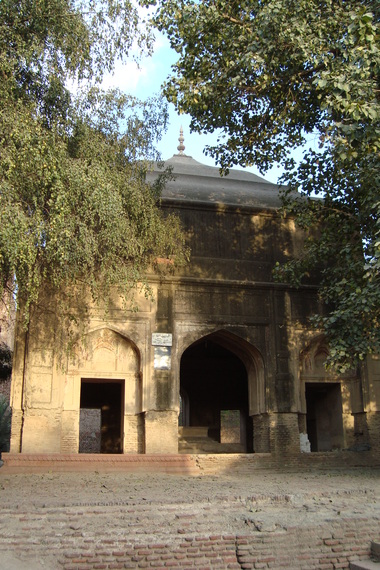 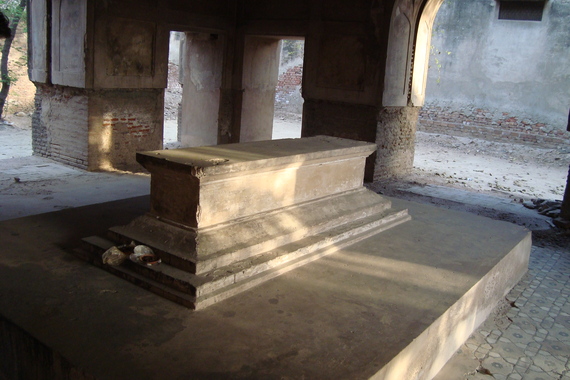 Facing the tomb is Multan road where construction work for the metro is in full flow. It is believed that after constructing the garden of Chauburji Zeb-un-Nissa spent 20 years here imprisoned by her fanatical father. This favourite daughter of the emperor was close to her uncle Dara Shikoh, the eldest son of Shahjahan in line and anointed to succeed him, before he was challenged and killed by his youngest brother Aurangzeb. Like Dara Shikoh, she too was inclined towards Sufism and dabbled in poetry. She is one of those rare Mughal princesses who have been able to record their names in the annals of history, while hundreds of others like her lived and died in obscurity, while the men recorded tales of their bravery.

Legend has it that Zeb-un-Nissa fell in love with the governor of Multan, Akil Khan, and they used to have their rendezvous at this garden of Chauburji. When Aurangzeb heard about this love affair, he is said to have had his governor boiled in a cauldron while Zeb-un-Nissa was imprisoned at Chauburji, where she was later buried. Just behind the tomb of Zeb-un-Nissa are the remains of another garden, also attributed to her. Only the gateway of this garden survives, like in the case of Chauburji, and this monument is aptly called Chhoti Chauburji. 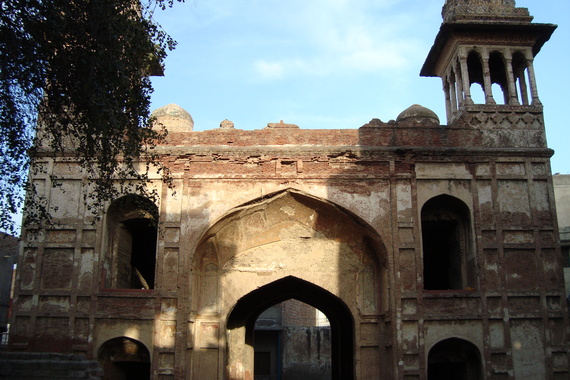 These are, of course, all folk tales and there is enough historical evidence to prove that the Chauburji garden was constructed when Zeb-un-Nissa was still a child. Some historians believe that this garden was constructed by her aunt, Jahan Ara, the sister of Aurangzeb. Historians have also challenged the assertion that the tomb next to the Chauburji is that of Zeb-un-Nissa. She was buried in Delhi, they point out. In a strange coincidence of history, her tomb was said to have been razed by the British while they were laying the railway track for the Rajputana-Delhi line.

Irrespective of historical validity, Chauburji continues to be associated with Zeb-un-Nissa, along with the tomb next to it. It became a symbol of rebellion against a fanatical and oppressive father. This is how the people of Lahore continued to imagine Zeb-un-Nissa. Chauburji today is once again seen as a symbol of revolt against a government that is seen only focused on constructing flyovers and roads, ignoring other aspects of governing. It has become a symbol of protest against a Chief Minister, who is a one man government willing to damage the heritage of Lahore in his obsession to be seen as a developer of this city, and hence Punjab by extension.