Lailat al Miraj is a Muslim holiday that commemorates the Prophet Muhammad's nighttime journey from Mecca to the 'Farthest Mosque' in Jerusalem where he ascended to heaven, was purified, and given the instruction for Muslims to pray five times daily.

On the Islamic calendar, Lailat al Miraj (also known as Isra and Mi'raj, Al Isra'wal Miraj or Laylat al Miraj) is generally observed on the 27th day of the month of Rajab. Lailat al Miraj 2013 falls on June 5, although the observance begins at sundown on June 4. 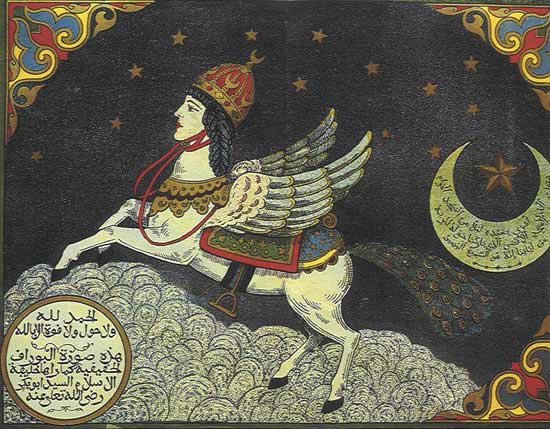 The story of Lailat al Miraj consists of two major parts. The first part of the story begins with the Prophet Muhammad at the Kabaa in Mecca. He is visited by two archangels who provide him with a mythical winged steed called Buraq. Buraq carries the Prophet to the 'Farthest Mosque,' believed by Muslims to be the Al Aqsa mosque in Jerusalem, where Muhammad joins past prophets in prayer.

The Prophet then ascends to heaven where he is told by God of the duty for Muslims to pray five times daily (Salat). This second part of the journey is commonly referred to as the Miraj, an Arabic word meaning "ladder."

The events of Lailat al Miraj are described briefly in chapter 17 of the Quran, which is named "Sura Al-Isra" after the Prophet's ascension to heaven. Many of the details of the story are filled in by hadith, supplemental writings about the life of the Prophet Muhammad.

Today Lailat al Miraj is observed by Muslims as one of the most important events in the history of Islam. Muslims may attend special prayer services at a mosque, or they may commemorate the holiday privately at home by telling the story to children or reciting special nighttime prayers.