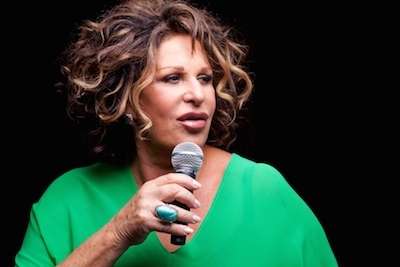 "I think it's wonderful that she'll be here. Our patrons love the fact that we're bringing her in."

The speaker is Myron Martin, president and CEO of Las Vegas' spectacular Smith Center for the Performing Arts and he's discussing the appearance of Lainie Kazan at the Smith Center's Cabaret Jazz space on February 28 and March 1. Her two shows were sold out and she received thunderous ovations.Going to her show it is clear that, simply put, people love Lainie. And that love comes from having seen her on stage, TV, film and from hearing her music since the 1960s.

Born in Brooklyn, Lainie Levine graduated from Erasmus Hall High School and Hofstra College (now Hofstra University). Both schools are well known for nurturing young talent that, as adult talent, becomes very well known. Kazan was named "Queen of Brooklyn" at 1997's Welcome Back To Brooklyn festival. Kazan's friend Jaki Baskow -- known to many as the "Queen of Las Vegas" -- owns Baskow and Associates, Las Vegas' oldest meeting/event management company. She often books talent for conventions and she says, "When I bring Lainie in, the clients are always excited to have her. She puts on a great performance and is always a hit. People love her."

Kazan debuted on Broadway in 1961 and understudied Barbra Streisand -- another Erasmus graduate -- in Funny Girl. She posed nude in the October 1970 issue of Playboy.. Since then, she's accumulated well over 100 film and TV credits, often playing ethnic characters, mostly Jewish and Greek. Kazan appeared in 26 -- one-tenth of the total -- episodes of The Dean Martin Show. (video below) A semi-regular on Fran Drescher's show, The Nanny, Kazan also had an arc on Desperate Housewives. She was in the 1982 film My Favorite Year and repeated her role for the short-lived TV series.

"The kids today have to be exposed to this music," she says. "It's so rich. Each song is like a play. Each tells a story. That's very different from how music is written today. There used to be a real love of language in lyrics. Not any more."

A life member of the Actors Studio, Kazan studied acting with Sanford Meisner and Lee Strasberg. She says, "The relationship between singing and acting is intertwined and intimate. Singing has to be specific. There's a back story for everything I sing."

In addition to her singing and acting, Kazan believes it's important to pass on her vast knowledge of her field. She's returned to Hofstra to teach and perform. A visiting associate professor at UCLA's School of Theater, Film and Television (TFT) , Kazan each year directs her students in Lainie's Cabaret, where in the Ray Bolger Musical Theater Program in the school take class from Kazan and, capping off the semester, perform.

Kazan played The Smith Center in Las Vegas last week and she was a major hit. Doing a set list composed of songs she's performed onrt Broadway and standards she loves, she has the was a resounding success and, after the show, spent almost an hour meeting fans and signing autographs.

When not teaching or performing, she devotes times to charity. Her favorites are AIDS organizations and Israel. An avid reader, she enjoys reading about science and philosophy. For the future, she says, "I really want to do a dramatic movie with music. That would be my piece de résistance."

With the passion for what she does palpable in her words and her performance, one can only hope Lainie Kazan gets to do that movie.