Lake Erie is under attack from noxious algae blooms, and the problem only looks likely to get worse if something isn't done to reverse the trend, new research suggests.

In the summer of 2011, western Lake Erie turned a noxious green, as a massive algae bloom coated the surface and lapped up in mats along the shore. At its peak, the bloom covered an area 2.5 times larger than that of any Erie bloom on record, according to a study published today (April 1) in the Proceedings of the National Academy of Sciences.

Several factors converged to cause the bloom and may increasingly do so in the future, said Anna Michalak, a study co-author and researcher at the Carnegie Institution for Science at Stanford University. 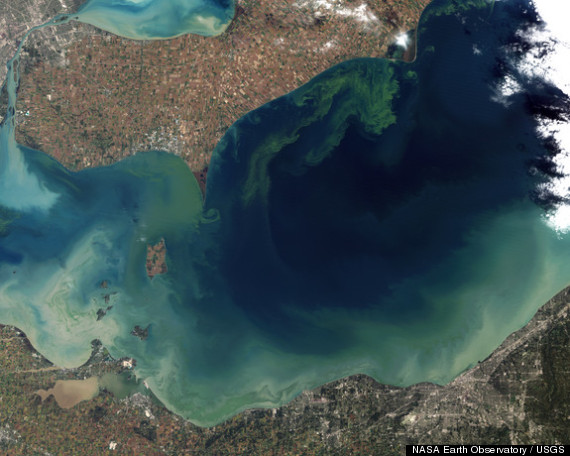 An image of the Lake Erie algae bloom acquired by the Landsat-5 satellite on October 5, 2011.

First, agricultural practices have changed in the past few years, allowing for more fertilizer to run off from fields in the surrounding region and end up in the lake, Michalak said. There, the fertilizer feeds the growth of algal blooms. The practices include increased use of fertilizer, earlier application of the nutrients on bare ground and less use of tillage, in which fertilizer or manure is worked into the soil.

The first technique was intended to deliver fertilizer before spring storms, so farmers would not have to pick a time to apply fertilizer between rains, Michalak told OurAmazingPlanet. However, the method hasn't worked as intended, due in part to larger than expected storms. The second practice, avoiding tillage of the soil, helps preserve nutrients in the earth, but may increase the amount of fertilizer lost in large spring rains, she said.

Perhaps more importantly, runoff was made worse by explosive spring storms in 2011, which dropped a lot of rain in a very short period of time and washed the fertilizer away, Michalak said. In the lake, above-average temperatures also nourished the algae. Furthermore, a lack of strong winds prevented the lake from being mixed up, which normally makes algae sink to the bottom and brings low-lying water up to the surface, she said.

Unfortunately for Lake Erie, climate change is expected to lead to larger spring storms, warmer temperatures and fewer strong winds in the future, Michalak said. Dealing with climate change on a global level, then, could have an important local effect, she said.

But agricultural practices are more easily changed. Methods that lead to less fertilizer loss would help farmers, who must pay for the nutrients, as well as the lake environment, she said. 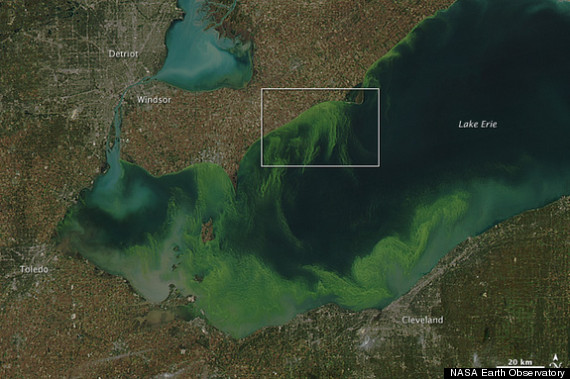 An image of the Lake Erie algae bloom acquired by NASA's Aqua satellite on October 9, 2011.

"We need management policies that are good for agriculture as well as the lake ecology," Michalak said. "It doesn't do anybody any good to have these nutrients flowing into the lake. It's money being wasted by the farmers, and you are essentially fertilizing the algae instead of fertilizing the crops."

The nutrients in the fertilizer runoff, particularly phosphorous, feed the growth of a type of algae called cyanobacteria. Besides being unsightly, the blooms hurt fish in the lake by decaying and consuming massive amounts of oxygen, creating dead zones. But the cyanobacteria also pose a health hazard to people; the predominant type of cyanobacteria present in the 2011 bloom, called Microcystis, produce a potent liver toxin. The study found that levels of this toxin in the surface of Lake Erie were up to 200 times above the limit deemed suitable by the World Health Organization.

Invasive zebra mussels and quagga mussels have added to Lake Erie's problems, as these organisms preferentially eat phytoplankton that live in the lake and that normally compete with cyanobacteria, Michalak said.

The 2011 bloom "was a significant one in Lake Erie and I agree that it is unlikely to be unique," said Jan Ciborowski, a researcher at the University of Windsor, Ontario, who wasn't involved in the study.