The sale is perfectly "legal," but is it morally, ethically, and spiritually correct?

In a race against the clock, the Sioux Nation is fighting to save Pe' Sla, one of its most sacred religious sites. Pe' Sla, located in the Black Hills of South Dakota, is the epicenter of the creation story of the Lakota, Dakota and Nakota nations. Tribal elders and spiritual leaders conduct ceremonies essential to their culture and beliefs at times of the year when the stars are in special alignment. On Aug. 25, 2012, approximately 1,942.66 acres, sold in five tracts of land, will be auctioned off to the highest bidder. Once sold, it is highly likely that Pe' Sla will be opened up for development, with the State of South Dakota building a road directly through it, according to a press release I stumbled across on Facebook. If the Sioux ever needed a savvy PR and fundraising team, now is the time, and it may be too late.

The fact that native sacred places were taken illegally by the United States government is secondary to the urgent need to do something to protect this privately owned yet cosmologically significant site before Aug. 25, less than two weeks from now. In a gallant effort the Sioux Nation is fundraising to buy as much of the holy ground of Pe' Sla as possible. What is possible and what is realistic may be two different things, or they may not.

To be honest, when this writer discovered the story, the situation seemed overwhelming and hopeless. How would the Sioux be able to raise over one million dollars in a fundraising campaign in two weeks? So I dutifully posted it on Facebook, tried to go to sleep, tossed and turned in protest at my inaction, and now find myself blogging away at 1 AM--hoping and praying that by throwing this sad, terrible story against the wall, something might stick. 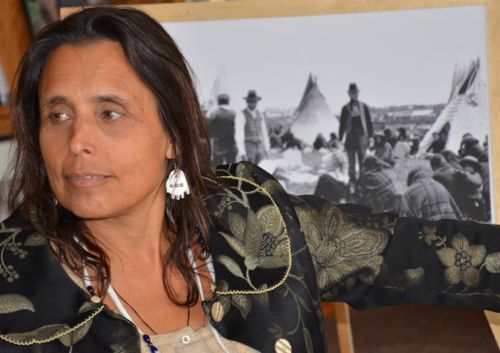 Winona LaDuke, the great native activist and teacher wrote a note "from the heart" about the importance of the Great Mystery to indigenous peoples, and here is the link to it. Read it. It may uplift you and it may bring a tear to your eye, but most of all it may inspire you to offer testimony and "talk story" about what is happening. The act of speaking is an act of spiritual solidarity.

"In the time of the sacred sites and the crashing of ecosystems and worlds, it may be worth not making a commodity out of all that is revered," LaDuke writes, asking the critical question of morality.

She goes on to cite Lakota scholar Chase Iron Eyes, who said:

Pe'Sla, to the Lakota, is the place where Morning Star, manifested as a meteor, fell to earth to help the Lakota by killing a great bird which had taken the lives of seven women; Morning Star's descent having created the wide open uncharacteristic bald-spot in the middle of the forested Black Hills. (On American maps, this is called, Old Baldy) The Morning Star placed the spirits of those seven women in the sky as the constellation "Pleiades" or "The Seven Sisters."

On May 24, 1996, President Bill Clinton issued Executive Order 13007 that requires the government to "accommodate access to and ceremonial use of Indian sacred sites by religious practitioners." Unfortunately, the order applies to federal and not privately held lands, leaving an ethical chasm between what should be and what is reality at sacred sites.

And now, at this moment, there is absolutely nothing we can do about that harsh fact.

It is the hour of dark skies here in northern Minnesota and the Pleiades are just now rising in the eastern sky, soon to be followed by Jupiter, Venus and the waning crescent moon. I find myself wondering what the skies are like just one state to the west in the Black Hills. Part of the writer wants to go there to better explain the sense of the sacred lands, but there is no time to waste when the hands of the clock have moved into another day since the time I sat down to write this testimony.

So, feeling completely helpless and inadequate, we offer what little we can and hope that a solution can be found in the coming days to save the "heart of all that is."