Since the spectacular failure of Operation Umoja Wetu in the eastern Democratic Republic of Congo (DRC), Congolese forces (FARDC) have formed a new military campaign with MONUC. Dubbed Kimia II, the new operation appears headed for the same fate. After the detention of rebel Congolese Tutsi General Laurent Nkunda by the Rwandan military (RDF) in January, Umoja Wetu was intended to eliminate Rwandan Hutu rebels (FDLR), but failed miserably when Rwanda abandoned the operation due to negative public opinion and open, bitter hostility from a Congolese parliament that was in opposition to Congolese President Joseph Kabila's pact with Rwanda's President Paul Kagame.

Lalibre's Marie-France Cros is one of the growing numbers of foreign journalists raising questions and eyebrows regarding the string of colossal military failures in DRC. The irony is complete when one recognizes that "kimia" means "peace" in the local Lingala dialect. Lalibre reports what a minority from Congo have been saying for months-- the military efforts since the removal of CNDP leader Nkunda have resulted in an escalation of the violence. She calls the situation "une région au bord de l'explosion"--a region on the brink of explosion, and asks the logical question that American media has not tackeld: "Mais n'est-ce pas trop tard ?"--But is it too late? 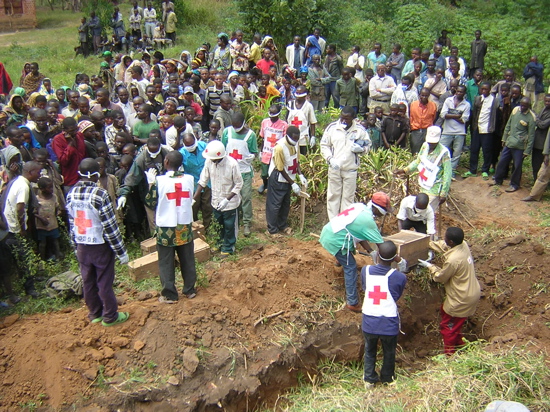 Recent events and an ignored report by the independent United Nations' Special Rappateur explained previous failures and predicted the current escalation, but no one in American media appears to be listening. On May 18 Turkish diplomat Baki I`lkin sent the Interim Report of the Group of Experts on the Democratic Republic of the Congo to the United Nations Security Council.

During Umoja Wetu, the FARDC-RDF alliance was able to push back FDLR from some of its key locations, but the military operation suffered from a short timespan, logistical bottlenecks and the reported embezzlement of operational funds, and failed to break the FDLR command and control apparatus, which remains intact. Since the withdrawal of RDF, FDLR has counterattacked in various locations across North and South Kivu, resulting in increased civilian casualties. Delays in the disbursement of FARDC salaries have also exacerbated indiscipline within the newly integrated FARDC units, resulting in ongoing human rights violations perpetrated by FARDC, including looting and attacks on the civilian population.

Kimia II has obviously not fared any better, and the continuing embezzlement of funds resulted in a veritable mutiny of integrated Congolese forces as reported by the BBC.

A senior UN peacekeeper told the BBC that army commanders are not handing over soldiers' wages. The army and UN forces are conducting an offensive in the region against ethnic Hutu rebels many of whom fled to DR Congo after the Rwandan genocide. A UN spokesman told the BBC the situation needed to be dealt with urgently. "There is a risk of a potential disintegration of the Congolese army," he said.

But what is the real objective of Kimia II? In late April, the Special Rappateur reports that control of the rich mining sectors was the ultimate goal and the protection of civilian populations was of secondary concern.

At the end of April 2009, Operation Kimia II was yet to be fully on track. Following the deployment of two senior ex-CNDP officers, General Sultani Makenga and Colonel Claude Mucho, to Bukavu and Kindu, respectively, in March 2009, operational plans were put on hold for logistical reasons. Colonel Mucho's troops had started to move towards Shabunda in South Kivu, although some FARDC officers admitted to the Group that the real objective behind joint operations is to finally take control of mining zones in Walikale. The Group understands from FARDC sources that operations launched by FARDC from Bukavu would be organized in part to clear out FDLR elements from mineral-rich zones in Kalehe.

In addition, the MONUC operated and funded Radio Okapi report on June 23, urged all involved to "avoid the blunders" generated by Umoja Wetu.

In an official press released published yesterday Sunday [21 June],the commander of Operation Kimia Two announced that the FARDC [DRCongo Armed Forces] currently controls nine localities formerly occupied by the FDLR in the territories of Shabunda, Kabare and Walungu. The spokesperson of ex-armed groups in Nord-Kivu said he was pleased with the operations.

However, Didier Bitaki, the spokesperson of ex-armed groups, called for caution. Despite being pleased with the beginning of the operation in Sud-Kivu, he said that those planning the operation should learn from the Nord-Kivu experience to avoid blunders. He made a statement on Monday during the programme Dialogue between Congolese. "My reaction, is one of satisfaction, for the operation to be transposed to Sud-Kivu, despite the continuity of atrocities on the ground in Nord-Kivu.

Meanwhile the "peacekeepers" in MONUC have refused to attack the FDLR, saying that they are present only to support the Congolese army. We received a report yesterday that in the town of Kanyabayonga, the rebel FDLR set fire to 35 houses, forcing the exodus of the entire population. Details are sketchy now, but reports from the ground say that the FARDC and MONUC troops were deployed only 2 kilometers away and did nothing.

Lack of coverage and international outrage aside, the FDLR in collusion with the FARDC have consistently terrorized the civilian population of eastern Congo. There seems to be no end in sight. Indeed it appears to be too late. "Blunders" are no excuse in this great humanitarian tragedy.