"People would spit at me every day when I went into school," Lalita Tademy recalls. Hers was the first black family to make their home in Castro Valley, California, just south of Oakland, in the 1940s and 50s. "They made it very known that they wanted us out."

But Tademy persevered. She read voraciously and excelled academically. She won scholarships, she climbed the corporate ladder, and in the midst of the first great tech boom, Tademy occupied a position that remains rare for female minorities: she was an executive at a Silicon Valley powerhouse, Sun Microsystems.

And then she quit. Her colleagues and family were stunned.

Her career had become unfulfilling, and Tademy decided to take her life in a different direction. She spent her newfound free time pursuing a passion for genealogy, which led to the idea of creating fiction about the fascinating ancestors she'd researched.

Multiple bestselling historical sagas later, Lalita Tademy has established a new career and a new approach to life. (Her latest novel, "Citizens Creek," focuses on a real-life slave with a gift for learning languages who was sold to a Creek Indian chief as a 10-year-old and who became the first black Creek chief after the Civil War.)

At her home in the Bay Area, The Huffington Post asked Tademy to share some life lessons -- about shifting careers, aging, regrets, relationships that flower later in life, and death.

What do you say to people who are on the fence about leaving an unsatisfying career to pursue their passion?

There comes a point where you have to decide whether you're willing to live the one life that you have in an unfulfilled way.

I'm very supportive of people taking risks, and while that risk may not take you where you think that it might, I think it will take you someplace where you can pivot and eventually find your footing.

If you are going to take the risk, do it the smartest way that you can. Plan it, save, give yourself a cushion. Don't just say, "I don't have to take this anymore,” and walk out. That's not a formula for success, because whatever happens, it's probably going to take longer than you expect. 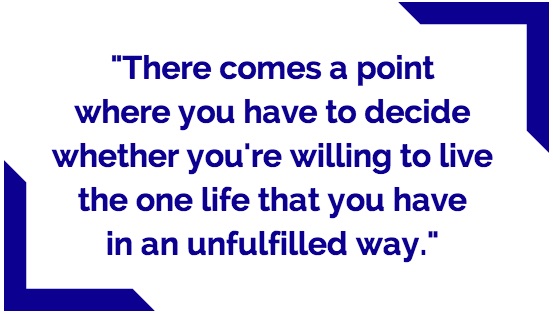 Do you know anyone who took that risk but didn’t see it pan out well?

I do. Actually, maybe I don't. I do know people who have stepped off and said, "I'm going to pursue something else," and then the "something else" didn't materialize in a way where they could be supported and they had to try to fight their way back.

But I'm not sure that was a failure. I think they stopped themselves from being on a track that they no longer desired, and they ended up someplace that maybe wasn't lofty, but it did get them re-situated.

You went from working in a stimulating environment surrounded by smart people to working mostly alone. How have you adjusted your social life?

What I've done is I've replaced a lot of my business friends with creatives, other writers and people who understand that solo pursuit of a project.

I joked with my husband, there was a moment when I was so incredibly happy because I knew more writers than I knew business people. I was thrilled, because it's a different energy, you're feeding off people in a different way. Now a lot of my friendships are around hiking or walking — it's one-on-one, one-on-two, one-on-three, smaller groups. It's going to lunch, it’s going to dinners.

But it took a while to get there. It was quite a shock to step off of the corporate merry-go-round, and I was eager to do so but very surprised at how different life is outside of that cocoon.

What is a great regret of your life?

I don't spend a ton of my time on regrets. There's very little that you can do about it. And if you can do something about it, it's no longer a regret.

I got married for the first time when I was 55. With the type of career that I had, at the time that I had it — for an African-American woman in the corporate world, I didn't feel that I could juggle much of a social life and be able to accomplish what I accomplished in corporate America. Theoretically that could be a regret, that I didn't spend more time trying to find a balance, that I wasn't more aggressively seeking a partner.

But I can't regret that because when I did get married, it was the most fabulous match ever, and it was what I'd been waiting for. It was tremendously, over the top, emotionally satisfying. We both came to it late, and therefore actually understand how incredible what we have is, and can really enjoy it together.

So I think regrets just get ground up and put in a different pocket, and take you where you're supposed to go. 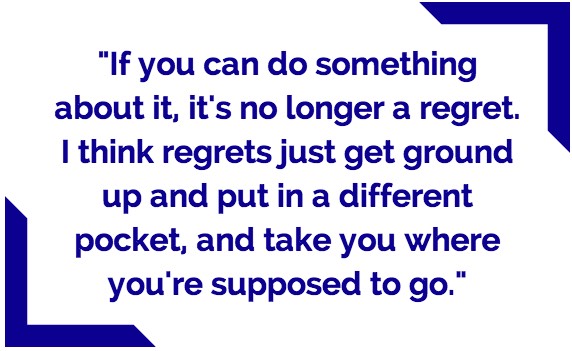 What about your relationship with your husband worked that hadn't happened with previous relationships?

I think that leaving the corporate world and then finding out that I could write opened me up in new ways. I wasn't nearly as rigid as I had been. I was more flexible and open and appreciative of someone else and someone's needs, and the possibilities and the potential that two people can have together.

I don't believe that if I had met my husband earlier in life that we would've gotten together, because I don't think I would have been open to it. Because I waited so long, I knew that this was something that could work and that I was willing to work hard to preserve. I'm not sure I would've worked that hard earlier on when I was thinking of my needs.

You don't have children. Are you content with how that part of your life has unfolded?

I am. It wasn't as if that was something that I was desperate to do at some point and it just couldn't happen. I made a series of choices, and that was never the top choice. And when the time for that faded away, that was okay with me.

You’re in your mid-60s. Do you have any advice for people who are 10 years younger about how to get the most out of the next decade?

The 50s were my best decade ever. I loved my 50s beyond all reason. I was on enough of a financial perch where I knew I'd be okay — not necessarily fabulously well, but okay. And I was on an emotional perch that was great. I knew how to no longer buy into toxic people in my life, just let that go. And I had things that I wanted to accomplish that I could work on as projects that were very fulfilling. Everything seemed very right.

So what I would recommend is: concentrate -- in a non-selfish way -- on making yourself happy. People around you will respond to that. 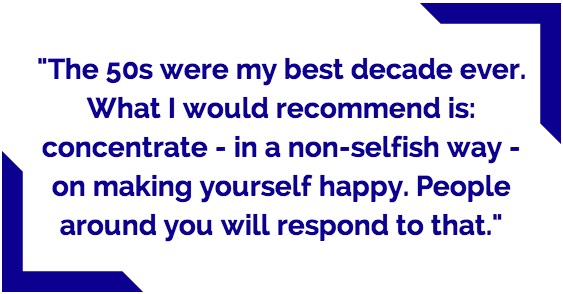 Do you think about death?

I actually think about other people's death more than my own. I come from a family of very long-living females, and so my biggest disappointment will be that I will outlive the people that I cherish and that I love. I do think about that quite a lot instead of my own death.

I feel so supported at this moment in time in so many different directions, and I just dread the thought of those people falling away from my life. And that's what I think about.

Your mother passed away not too many years ago. Did you take away any lessons regarding grieving that others might find helpful?

My mother's death was long in coming. She had multiple sclerosis; she was bedridden, housebound for decades. So for her passing, it was a relief for her not to be in pain, and I had a great deal of time to prepare.

My father passed before she did. I never felt as if we didn't say things that we should have said to one another. I think that can haunt you for your whole life if you don't engage, and interact, and say the things that you want to say to somebody so that they know what they mean to you.

If you do tell them, then it’s just a natural passing and it's part of life. Otherwise, it is a regret that you hold on to. 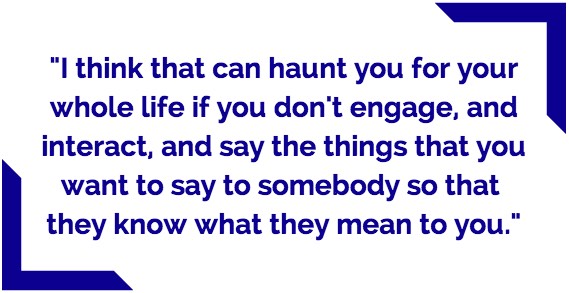 Very truthfully, I've accomplished more than I thought that I ever would. I've had two careers, and both have gone very well.

I have three books that I am very proud of -- not because they're bestsellers or not bestsellers, but because they really, I think, bring forth history in a way that it isn't always depicted.

So I don't have a big bucket list of "I need to visit these places," or "do these things," or "leave this behind." It is what it is, and I'm feeling pretty dog-gone good right now.

Transcription services by Tigerfish; now offering transcripts in two-hours guaranteed. Interview has been edited and condensed.