I hear that L.A.M.B. was the place to see and be seen last night (Kanye was there, apparently), but all I could see from my seventh row seat (relax, guys -- I'm kind of a big deal) was Debbie Harry.

Wait, what am I saying? I SAW DEBBIE HARRY! IT WAS AWESOME! Her hair was silver and textured and kind of looked like a mop, but Blondie was bound to go gray-ie eventually. I also spotted the diminutive Christian Siriano being interviewed in the front row, and, because I am a Project Runway freak, also recognized Ben Chmura from season 7 in a nosebleed seat like mine across the aisle. Them's the breaks, Ben.

It gets worse. I am such a reality show whore that I even recognized the small, spray-tanned, Botoxed Andrew (a.k.a. the Andrew who is not Andrew Mukamal) who worked for Kelly Cutrone briefly on her Bravo show pacing the floor in a headset.

Oh, and Gavin Rossdale was there too, with Kingston in his lap, in case that excites you more than a reality extra who barely made it through two episodes of Kell on Earth. No accounting for taste.

Against a huge video backdrop playing an endless loop of sped-up clouds and thunderstorm footage tailor-made for stoners, Stefani showed a collection clearly influenced by traditional African style. Dresses, tops, jackets and pants--some cute, some unfortunate, most very heavy-handed with the Rastafarian theme--incorporated bright oranges and rich, earthy maroons as well as more muted neutral patterns. Many models wore jaunty fedoras and carried oversized handbags. The music--mostly remixed reggae, with some M.I.A. thrown in--was deafening, but Gavin bopped along to the beat. Both he and Kingston were chewing gum.

At the end, Stefani got a standing ovation, as well as an escort when her son ran out to greet her in the middle of the runway. She didn't see him at first and they almost collided, but thankfully the damage for the evening was reserved for the trees in Brooklyn, and no celebrity offspring were harmed. 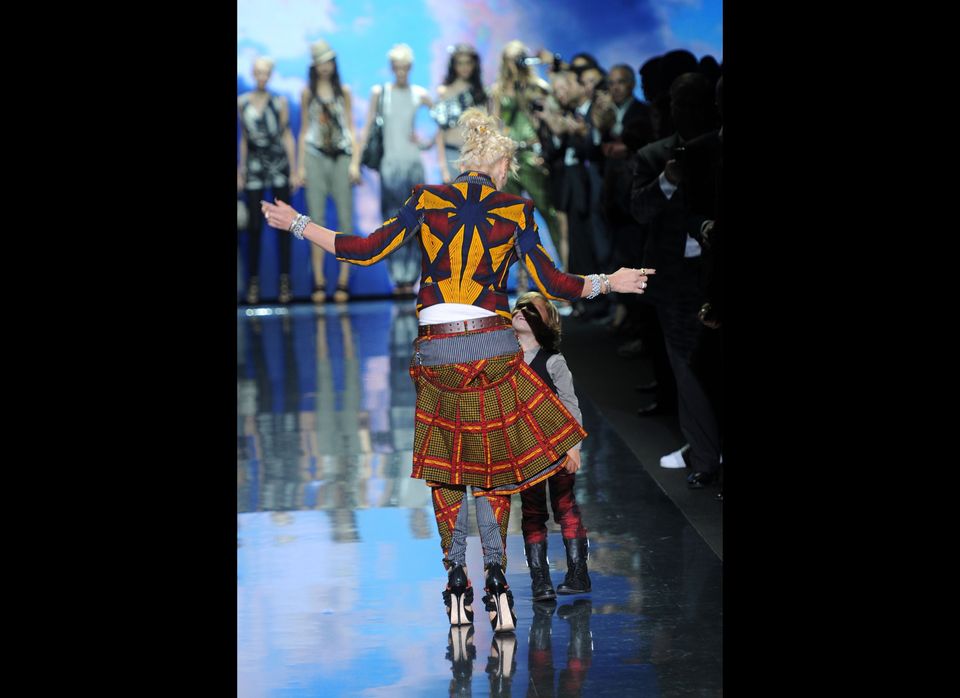