The Lammermuir Festival 2011 took place in an endearing jumble of towns and villages throughout East Lothian, east of Edinburgh. The venues ranging from airplane hangars to royal palaces (royalty included) and scenes out of Brigadoon. Avant-garde icon Philip Glass rushed past at the speed of sound, blonde bugle-playing blonde superstar Alison Balsom played bare-backed, Jennifer Koh carried a torch for Menotti and Bach, and early music vocal group Stile Antico celebrated a Spanish composer who died in 1611. Capping it off, the brilliant young Navarra Quartet defied the gods by playing three different programs on one day, each with a different, back-breaking Beethoven quartet.

The brainchild of a topflight creative and managerial team, the Lammermuir Festival gave East Lothian 21st-century dimensions against its timeless Scottish landscape of rolling hills, fields, forests and dramatic skies. The people of the region are warm and sometimes quirky, and the pace of life is largely the way it was in Elizabeth Taylor's Lassie movie.

1000 Airplanes on the Roof, Philip Glass's seminal performance piece, made its first appearance in a hangar since the premiere 23 years ago in Vienna. A stunning achievement for only the festival's second year, the National Theatre of Scotland's brilliant production showed with stunning force and striking detail the multimedia potential of modern technology. The presence of one of the seven remaining Concordes lent the chilling science-fiction story a surprisingly festive air. At the end, when the massive hangar doors slid open and let in the cold and clear black night, the audience came over to look, like in a Fellini movie, mesmerized and silent, before their cheers started up. 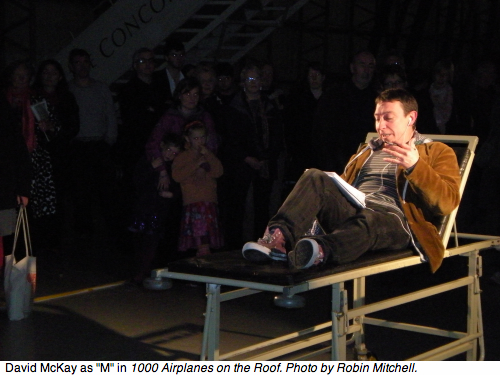 Celebrating the 400th anniversary of Tomás Luis de Victoria, the a cappella group Stile Antico created awesome blocks of light and shade from the music of Victoria and his contemporaries. Singing Catholic church music in a post-Reformation church that fire-breathing John Knox may once have preached in may seem like heresy, but St. Mary's Parish Church never blushed one bit. Located in the historic market town of Haddington, which it has served for more than 400 years, the oft-restored building is one of those tall, long and narrow ecclesiastical spaces along which words and music fall in like parishioners and focus like lasers.

Jennifer Koh's titanic struggles on behalf of solo violin music centered on Bach, took place in the 14th century Great Hall at Lennoxlove, the seat of the Dukes of Hamilton (the Scottish peerage's senior dukedom -- the Duke unlocks the castle in Edinburgh when the Queen visits Scotland). With two splendid stags rampant on the wall behind her, Koh's playing itself was no less rampant, injecting immense amounts of intense passion into the entire program. 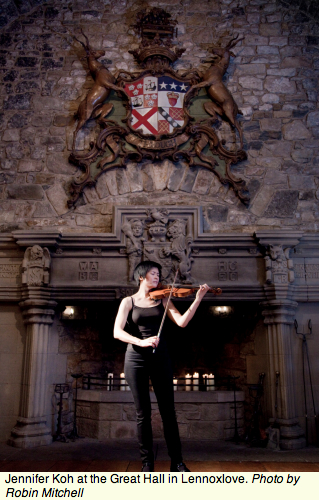 To celebrate the centenary of one of East Lothian's most celebrated former residents, Jennifer Koh returned with the BBC Scottish Orchestra to play Gian Carlo Menotti's glorious Violin Concerto. It was a gala affair as titled royalty mingled graciously with commoners. The musical centerpiece, commissioned in 1952 by the legendary Efrem Zimbalist and premiered by a year later with the Philadelphia Orchestra, is a heavily conservative but thoroughly brilliant work that gives the soloist and orchestra plenty to do, and the audience plenty to enjoy.

The Festival showcased another of its audiophile venues (Scotland is the home of audiophile label Linn) when bare-backed trumpeter Alison Balsom and the crack Scottish Ensemble took on St. Michael's Parish Church in Inveresk. Situated on the coast of the Firth of Forth, six miles east of Edinburgh, the Kirk is said to have occupied this site since the 6th century. Along with bright, shining clarity and a slightly dry acoustic, it proved a near ideal space in which to hear the evening's program of Baroque favorites plus one new piece dedicated to Balsom who is every bit as beautiful and bewitching as Tara Fitzgerald's flugelhorn-playing character in the movie, Brassed Off. 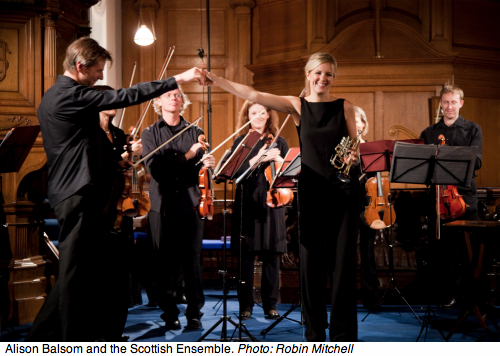 Given the assignment of playing three different concerts on one day, the young British Navarra Quartet gave incisive, compelling performances of Britten, Menotti, and Haydn. They surpassed themselves in three quartets by Beethoven. The early Op. 18 No. 1 was scintillating, the late Op. 132 was gripping and profound, and in the middle period Op. 59 No. 2, played in a rural parish church dating back to the 1100s, the Navarra found a focus and compassion that had the audience breathless from the first bar to the last. 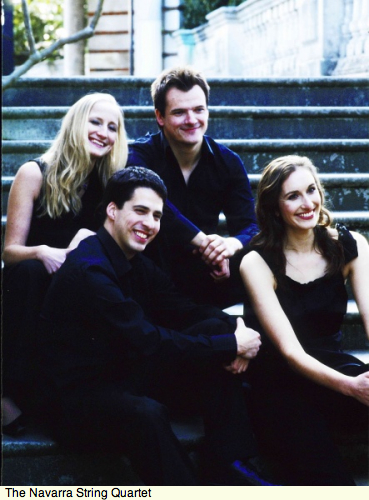 On its current course as a world-class music festival tucked away in a charming and exceedingly accessible corner of the British Isles, the Lammermuir Festival represents a great tool with which East Lothian may achieve both growth and continuity. The organizers are clearly aware of what expansion will offer, and require, of not only the Festival's resources but of the residents themselves. The good thing about festivals is that they can be localized to the hosting community or communities, from revitalizing villages to royal estates looking for income from conferences and retreats. Based on everything I saw and heard, the Lammermuir Festival has already taken wing.