What’s behind this ongoing surge in gang and drug trafficking violence? The answer is multi-faceted but a key element has been overlooked again and again: Local elites and foreign corporations gained control over much of the land that could grow crops, forcing smallholder farmers off their land.

After a land grab, large cities are often the only places farmers and others from rural parts of the country can go. But the cities offer few economic options for the migrants, and in response, they too often are targeted by gangs that make up a murderous urban sub-culture. Thus, many Central American refugees showing up at America’s door are both refugees of urban violence and, before that, of land grabs.

Many Central American refugees showing up at America’s door are both refugees of urban violence and, before that, of land grabs.

Honduras is a prominent example. Land grabs accelerated there in the 1990s after the government passed the Agricultural Modernization Law, which privatized collective landholdings. This favored large landholders and destroyed the claims of smallholders, who typically do not have modern-style contracts affirming their land ownership. According to Tanya Kersson, author of Grabbing Power: The New Struggles for Land, Food and Democracy in Northern Honduras, a few powerful landowners grabbed more than 21,000 hectares in a short period between 1990 and 1994. This accounted for 70 percent of peasant lands in the Lower Aguan Valley, one the most fertile areas in the country and the site for much of the land conflict in Honduras.

Land grabs and violence against rural Hondurans have gotten worse since the 1990s. The 2009 military coup gave the large landholders even more flexibility in expelling small landholders from their land. The incentives for doing so also grew with the entry of rich foreign corporations and strong World Bank support. A prominent company called Dinant Corporation, which is owned by one of Honduras’s most powerful men, has been accused of killing over 100 peasants in recent years. Dinant is financed by the World Bank’s International Finance Corporation, supported by the U.N. Clean Development Mechanism and has links with global corporations like Mazola Oils.

Honduras is not the only country where this is happening. Large corporations have been taking control of rural land in many parts of the world over the last decade. That access is sometimes lawful but other times shadowy, and it is sometimes accompanied by brutal armed conflict against unarmed peasants. Globally, land grabs accelerated in the mid-2000s, putting a large number of smallholders in crisis. Large foreign corporations joined in, and there have been killings and terrorizing of smallholders who fight back.

Much of what gets registered as “modernization and development” by governments and institutions like the World Bank looks very different to local peasants and local activists, journalists and scholars. They see environmental destruction and criminal activity. The companies do create some rural jobs but those workers are underpaid and overworked. The costs associated with some development projects have been known for years, especially in Honduras, where dozens of legal practitioners and human rights defenders, not to mention farmers and environmentalists, have been killed over the past few years. Many of these crimes remain unsolved.

The consequences of these rural expulsions are varied, and the connections with land grabs are rarely made. For instance, the U.S. Border Patrol was taken by surprise when 63,000 unaccompanied minors, most from Central America, crossed the southern border of the U.S. between Oct 1, 2013 and July 31, 2014. This was nearly twice the number of previous years. The explanation given by the children was “La Violencia,” referring to the violence in the cities. Fear led them to cross the whole of Mexico to get to the U.S. For most, their parents were dead or in prison. Neither the border patrol nor most analysts of this surge in unaccompanied migrant children connect La Violencia with the fact that many of their parents were forced from their land and fled to the cities.

Much of what gets registered as 'modernization and development' looks very different to local peasants.

Toward the end of 2014, the U.S. Border Patrol predicted up to 90,000 unaccompanied children would cross into the U.S. that year. The U.S. government asked Mexico to control its southern border to stem the flow of migrants from Central America. Between October 2014 and April 2015, Mexico detained almost 93,000 Central American migrants. Detention by Mexico’s guards at its southern frontier was brutal and put the U.S. in a dubious position. Washington eventually loosened the pressure on Mexico’s southern border detentions. So once again, the flow of Central Americans to the U.S. border, if they could make it that far, jumped sharply.

Countless individuals and families making this long trip have died, given up, stayed somewhere in Mexico or been kidnapped to work in plantations, mines or the sex economy. And these migrations are not likely to end. In addition to the violence, Honduras, Guatemala and El Salvador are among the poorest nations in Latin America with 21 percent, 11 percent and 4 percent, respectively, of their people living on less than $2 a day.

Little will be learned from all this as long as the explanation from entities, such as the World Bank, and other experts is focused on gang violence in poor areas of cities. La Violencia is out of control. But these cities were not always this way. Violence does not fall from the sky. It is made. In this case, it is made partly by large modern corporations that expel small farmers. 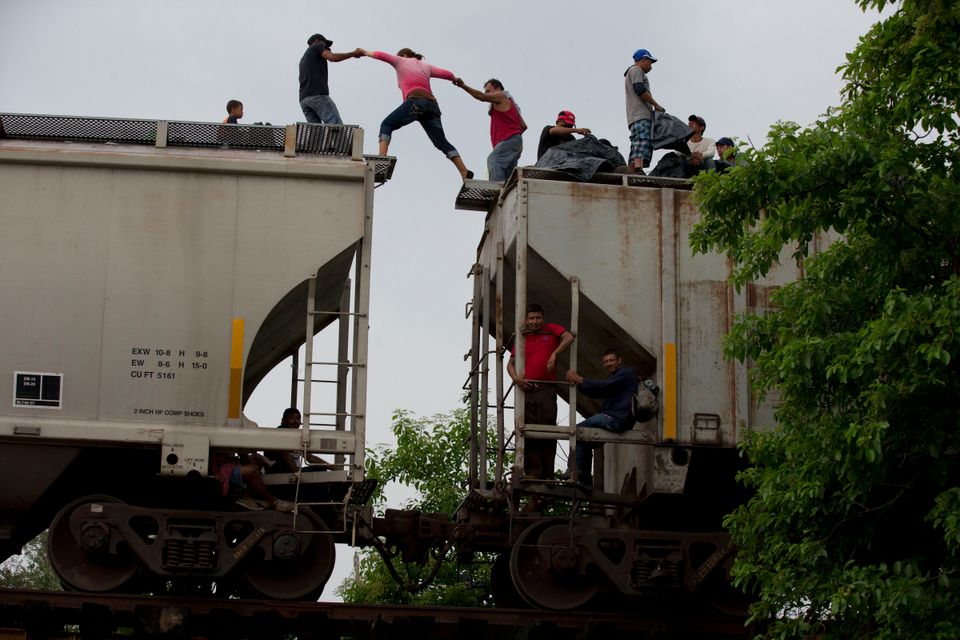 1 / 57
FILE - In this June 20, 2014 file photo, a woman is helped from one boxcar to another, as Central American migrants wait atop the train they are riding north, hours after it suffered a minor derailment in a remote wooded area outside Reforma de Pineda, Chiapas state, Mexico. Many migrants who say they are fleeing criminal violence generally are not eligible for political asylum, which is reserved for groups persecuted for their beliefs or identities. U.N. officials say there is no way of forcing the U.S. and Mexico to accept Central Americans as refugees, but a broad-based change in terminology could bring pressure on the two countries to do more. (AP Photo/Rebecca Blackwell, File)
Rebecca Blackwell/AP