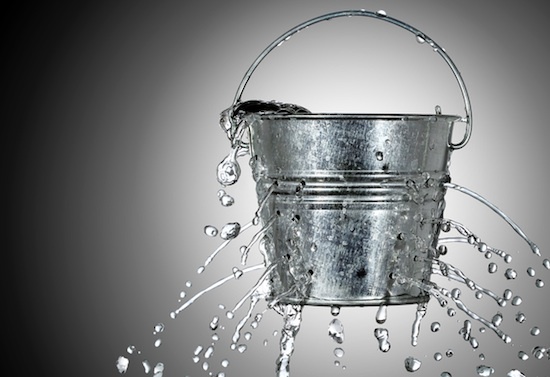 No one likes to lose money.

Whether at the poker table, the supermarket or investing in real estate -- it just sucks.

However, if you are a landlord you are probably losing real money every single month and you don't even know it. Or maybe you do know it, and are just ignoring it, hoping no one reminds you (sorry!)

So today I'm going to share the top three ways landlords are throwing money away -- and offer some tips on how you can reverse the problem.

You justify it in your head, saying "if I raise the rent, they might move and I'll lose more money!"

However, that's probably a lie. Come on; admit it.

Most likely, if you have a tenant who has lived in your property for more than a year, they are probably getting a good deal. It's not our fault inflation keeps ticking along and prices are going up. However, it is our fault if you don't keep up.

Recently, I decided to raise rent on about 30 of my units, about $15 per month each. Want to know what happened?

No one moved, no one even called to complain.

Because I was only keeping pace with what was competitive in my area. Sure, the tenants may have grumbled a bit when they received the letter, but if they started shopping around, they'd quickly find out they were going to be paying the same as they would elsewhere, but at a nicer property.

Chances are, a tenant is not going to move over $15 or $20, but keeping up with inflation and rising expenses is an important way to make sure you aren't throwing away money each month.

"But my grandma was sick!"

"But it was Christmas and my kids needed gifts!"

I've heard all the reasons in the world for why the rent is late, and I'm sure you have also. However, I still issue a late fee every time.

However, once a tenant pays late one time and is hit with the fee, they seldom ever pay late again. It hurts to lose money, especially for those on a fixed or limited income -- which most tenants are. Therefore, once they see the threat is real, priorities start to change and the rent starts to come in.

Now this tip is even more powerful than it might appear at first, and here's why:

When you hold to strict standards and policies (like enforcing late fees), it will prevent the tenant from being their own worst enemy. Let me explain what I mean.

A tenant is struggling to pay rent. Her rent is $850 per month, and month after month she is late. It's due on the first, but you'll take it on the fifth, seventh, ninth. Each month you call several times and eventually getting the money, usually on their next pay day. You are stressed out, the tenant is stressed out and no one is happy. Each month, the rent seems to be a little later. One month the tenant tells you she is waiting for her next pay check, so you say okay. The middle of the month comes, and she still doesn't pay. She clams up and stop accepting calls or answering their door. The simple fact is... she has given up. She is overwhelmed and knows that she won't catch up. You wait a couple weeks, and still nothing. Finally, you have to evict...

How can you prevent this problem from happening?

Sometimes you can't. Tenants run into financial problems, and you may be the one on the end of the hook for it.

However, YOU can change the way the situation turns out.

Had you issued a late notice and fee the day it was late, along with a three-day notice to pay or quit (or whatever process your state has for late rent) you would have done one of two things:

1.) Trained her to pay on time
2.) Got rid of her quickly (either by eviction right away or she would have simply moved.)

However, you allowed her own irresponsibility to get the better of both of you, causing a lot more drama.

You thought you were helping the tenant, but like the rich parent who spoils their bratty child, you raised a monster that cost you several months of lost rent, eviction costs and more.

For more information on dealing with late tenants, check out How to Deal With Delinquent Tenants.

Do you know what the largest expense, outside the mortgage, for a typical landlord is?

It's probably not maintenance, taxes or evictions.

You may think, "Ah, it's not such a big deal. It's only sitting empty a month or two."

That is a big deal, and that's big money you are throwing away. As I explained in my recent article "The Two Most Painful Words a Landlord May Ever Hear..." -- vacancies can cause huge profit losses for your business and can quickly turn a good deal into a terrible deal.

Filling an empty unit may seem to be out of your control. After all, the tenants have to come to you, right?

Your ability to effectively market your property accounts for 90 percent of your ability to get a place rented (according to a survey I just made up but bet is true!)

When you get that "I'm Moving" letter from a current tenant, it's time to get to work. Find out what advertising medium works best in your area and use it. Stick a sign in the yard, place an ad on Craigslist or in the newspaper, or get that listing up on Zillow.

Better yet... do all three and get max exposure for your empty unit.

Time is not your friend. A property that rents for $1,200 per month is costing you $40 a day -- plus utility charges and the risk of holding onto a vacant property (vandalism, unknown water leaks, etc.)

You wouldn't throw $40 a day out the window or give it to a street thug... so why are you burning it with a vacant property? You don't even give your own mom $40 a day, so why burn it with lost rent? Get off your rear end, start doing some marketing and get that thing rented!

(*However... this doesn't mean you should accept an unqualified tenant. Screen your tenants like crazy and make sure you get the most qualified person to fill that space. For more on finding a perfect tenant, check out my posts "Tenant Screening: The Ultimate Guide" and "How to Rent Your House: The Definitive Step by Step Guide" )

You have a "hole" in your "bucket." Maybe several holes. And each month, you are losing money from these holes.

If you have enough money and don't mind tossing cash out the window, donate it to me instead and get out of the real estate game! However, if you are set on running a business that produces cash flow and builds wealth for you and your family, it's time to plug the holes and start running an efficient landlording business.

Do you have any more tips on the three items I've mentioned? Or is there another "hole" that you see is costing landlord's money each month? Take a moment and share in the comments below!