The Devias, of Walnut Creek, Calif., will do just about anything to hold onto their pit bull -– even go so far as to live out of their car.

Carol and Peter Devia and their two sons own two dogs who they’ve raised since they were puppies, ABC News reports. But when the husband and wife were recently fired from their newspaper delivery jobs, they lost their apartment and their pit bull, Rocco, has been standing in their way of securing a new home.

The couple says that when they find a potential place to live, the landlord immediately discounts them because they don’t want a pit bull living in their complex. The Devias have even taken out an insurance plan for the dog, but that hasn’t helped their case. 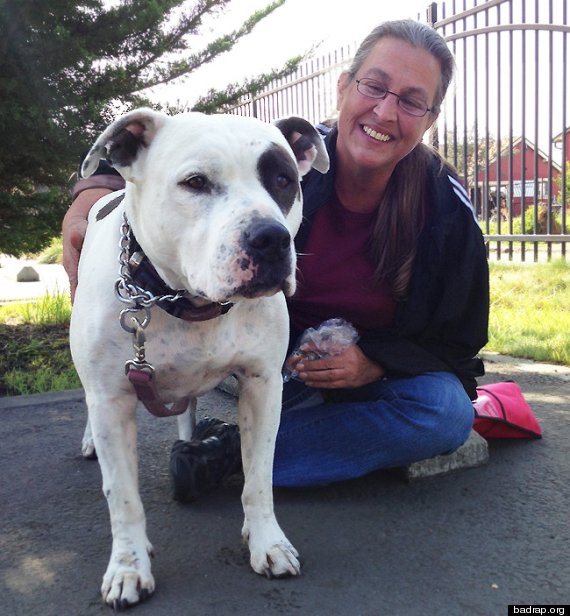 "I can’t find a place unless I give up my dog, and everyone tells me to, but I can’t do that," Carol Devia told ABC News. "We’ve had Camilla [a lab mix] her whole life and Rocco her whole life."

Carol and Peter's sons, who are young adults, are currently staying with friends, Donna Reynolds, Director of BADRAP -- an animal welfare organization that is helping the family, told HuffPost via email. The family is close and hopes to stay together, Reynolds added.

BADRAP supporters initially paid for hotel costs through the winter to keep the Devias off the streets. But bed bugs posed such a problem in the area's local low-cost, pet friendly hotels that Carol and Peter moved into their car and their sons decided to crash with friends, according to Reynolds.

While the Devias are trying to push back against such housing discrimination, a number of states have already outlawed breed-specific legislation.

Even some people who have had negative experiences with pit bulls don’t think landlords should be liable or that only specific breeds should be singled out.

Dominic Solesky, a Md. teenager, was mauled by a pit bull seven years ago, an attack that led the Maryland Court of Appeals to deem pit bulls "inherently dangerous." The 2012 decision also deemed the dogs’ owners and the owners’ landlords "strictly liable" for any attacks, according to the Baltimore Sun.

But even the Solesky family was disappointed by the ruling. They thought more victims would be helped if the law didn’t specifically single out pit bulls.

"I was hoping that they would come up with strict liability for all dogs," Dominic's dad, Tony, told the Sun.

Last month, Maryland's General Assembly considered undoing the controversial ruling and considered a bill that would make only owners, not landlords, responsible for their dogs.

After testing 400 pit bulls, the American Temperament Society found that 86.8 percent of them had low aggression, panic and avoidance. They were second in "most tolerant" only to Labrador retrievers in the study.

Studies also show that 84 percent of pit bulls involved in fatal attacks were neglected or abused, suggesting that their aggression is not necessarily innate.

As for the Devias, they have since found new jobs and remain hopeful that they will soon find a home that will welcome their entire family.

"It was hard in the beginning but then you kind of consign yourself to it and say okay," Carol Devia told ABC News. "I’m alive, I’m working. I hit bottom, so now I’ve been there and now the only place I can go is up."