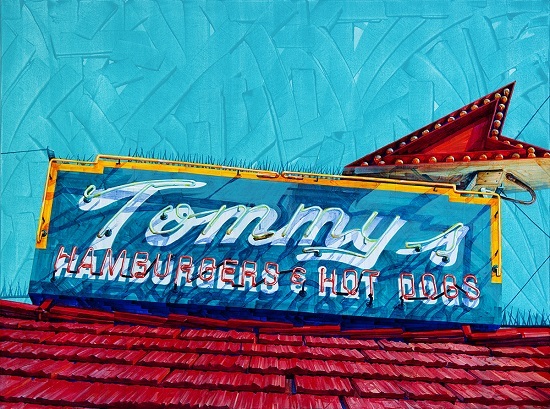 This past Saturday at The Seventh Letter Gallery, Paul "Krush," Meraz, a member of world-renowned graffiti crews MSK and AWR, and art collective The Seventh Letter, launched an exhibition of historical landmarks throughout the city of Los Angeles. Like the rest of us who drive all over the city and county like drifters going nowhere and somewhere simultaneously, we often neglect places of significance. However, as Krush began to take more notice of signage and typography of very specific places based on rendezvous points or frequency, he soon realized a sense of loss for the 20th century that is now becoming a fading memory. In today's highly digitized world where the latest smart phone is replaced months later by a newer, better, or more efficient product, we often romanticize an era where life seemed easier and more slow-placed. Some of the signs can't ever be replicated, although many locations try to architecturally create a throwback vintage sign for aesthetic purposes, because of their art-deco or streamline moderne fashion, such as the fonts and bright vivid colors that were era-specific. But, as you continue to drive around Los Angeles and pay closer attention, you too might notice the distant memory and affinity for a place you probably didn't know existed.

In LAndmarked, the exhibition covers a specific spectrum and palette which creates a cohesive façade. These colors are radiant and soothing, and can even represent a climatic warmth of the Los Angeles topography. The volition of colors are meant to compliment the color scheme of the landmarks where the backdrops maintain wide brush strokes and proportional lines that give it depth and texture. These artistic choices are subtleties, which is metaphoric for life's subtleties in general. Some of the landmarks include: Sam's Hof Brau, Cole's, Hop Louie, and Felix Chevrolet. If you grew up in Los Angeles, these are places you might have always remembered or visited yourselves, but in the ever-changing landscape of the metropolis, these places could be gone tomorrow and most wouldn't notice. It is Krush's dedication to landmark preservation, something he learned to appreciate from studying graphic design, drawing, typography and graffiti that inspired this exhibition.

His artistic career dates back to the mid 80s at the heyday of graffiti, commuting between Orange County and the San Fernando Valley. This was a time when crew members pushed each other competitively to bring out the best in skill and creativity, something that led to graphic design and an idea that still resonates today. LAndmarked is the beginning of a series of paintings that will capture the nostalgic essence of historical Los Angeles through the perspective of this young artist who maintains a strong connection to the cityscape via signage. The show runs from April 26th - May 10th, 2014 at the Seventh Letter Gallery where other exhibition pieces are available such as t-shirts, prints, and glassware. Don't forget to get out there and always support your local artists that work feverishly to provide us with different ways of looking at the ecology of our environment.