New York City has undergone enormous change in the past decade and there is no better place to observe this change than at the Landmarks Preservation Commission. This may seem counter-intuitive for those who think the Landmarks Commission is about stopping change or "freezing the city," but it is only counter-intuitive to those who limit their definition of change to building new, big and tall.

There has been plenty of that too. New York City in the decade before the bust had been transformed by new construction in every borough. But the most transformative and enduring change -- the kind that spreads economic benefits citywide and affects more than corporate high rises and the new luxury condos their employees occupy -- has come both through the upgrading of existing buildings and new infill located in diverse neighborhoods.

Some of the most celebrated new buildings designed by star architects, like Jean Nouvel and Herzog + de Meuron, are in historic districts, adding residential density to neighborhoods that once had none. In fact, it is primarily in historic districts where one can observe the variety of layers of urban change over time.

As one of the eleven Landmarks Commissioners, I was both a witness to and participant in this change. I had written about and been active in the preservation movement since the 1970s when many in the development industry aggressively sought to demolish some of the very buildings they are now profitably restoring, buildings standing today because preservationists won some battles over demolition.

I resisted joining the commission at first, thinking that the outside observer/critic should never cross over. I was mistaken. I learned much from inside the process. Most significantly, I observed close hand the sea change that has occurred in attitudes toward historic preservation. In the 1970s, one could not even get an Art Deco building designated. Now, pressure to designate even Modernist buildings is strong, particularly since the animated public discussion over the alteration of 2 Columbus Circle, Edward Durell Stone's iconic 1960s museum design. 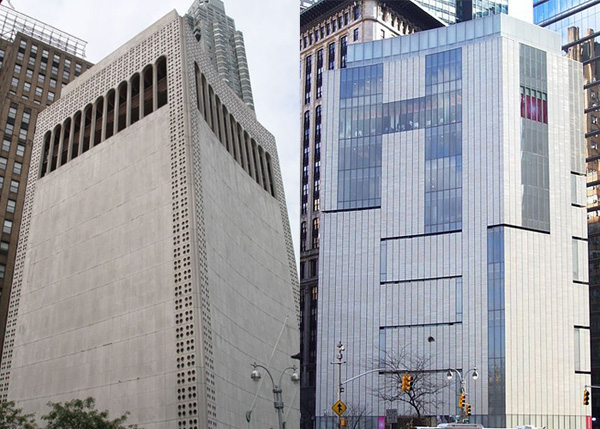 2 Columbus Circle, before and after. Photos by Renate O'Flaherty and Beyond My Ken.

Appreciation for historic buildings is intense. But the enormous economic contribution of preservation is rarely recognized.

Weekly, the Landmarks Commission approves expansions and renovations in the more than 100 historic districts and 1,200 individually designated buildings that represent an enormous investment of jobs and money into the local economy. Upgrades of storefronts, rooftop or backyard additions, extensive alterations, new buildings comfortably fitting in among the old are only part of the varied projects reviewed. The layers of history are protected and appropriately contributed to, adding density in an incremental but significant way.

Critics of historic preservation make the egregious error of assuming that landmarking stops change, growth and other categories of "progress." They also mistakenly assume that it is the designation of these neighborhoods that make them increasingly expensive, forgetting that New York City has become a city for the rich and the poor for national and local economic reasons that have nothing to do with preservation.

It is quite surprising these days that some commentators assume tall buildings define density. Most tall buildings built in recent years have contained luxury condos, big condos, in fact, that don't add up to the density observers think. Even when subsidized -- and too many of the towers are -- they are predominantly luxury prices. Moreover, all those high-rise low and middle-income housing towers that Robert Moses and others built and that observers assume represent "density" actually diminished density.

The demolished neighborhoods were a dense assortment of small, large, short and tall buildings -- rarely the irredeemable slum Moses proclaimed. The residential had been mixed in with commercial, institutional, industrial and retail. Their replacements neither had the same number of units nor the diversity. In the end, Moses built far fewer units than he demolished. The trade-off was acres of green space, now most often fenced off or converted to parking lots and, occasionally, playgrounds.

For most of the 20th century, in fact until only recently, the planning and policy mantra has mistakenly been that de-densifying cities fights crime and poverty. Finally, recognition that the reverse is true is being recognized. De-concentrating poverty is not the same thing as de-densifying neighborhoods. Only the latter has long been happening with the new construction.

It is indeed true, as preservation naysayers love to point out, that historic districts have become expensive but it is not because new excessively tall skyscrapers are not allowed; it is because these areas -- and many undesignated ones like them -- are considered the most desirable neighborhoods to live in.

The desired quality of urban life these days is found in old neighborhoods. Old-fashioned supply and demand -- the market -- has increased prices. And when new buildings are built in historic districts, they come in at high prices, many even more expensive than historic buildings. The old trickle down theory of real estate economics has never proven true on the ground. It only works when there is an overheated construction period and subsequent oversupply, which is what recently happened in NYC at the same time as the economy collapsed.

Luxury skyscrapers may be barred from historic districts but they grow like weeds on the periphery of those districts, a perverse testament to the value of historic neighborhoods. Just look at lower Manhattan, from Gansvoort to NoHo, Upper West Side or the assortment of Brooklyn neighborhoods now so popular. New luxury towers capitalize on the appeal of the historic district but add nothing to it.

No, the most interesting, productive and economically enduring urban change and the increased density it often brings is actually visible in historic districts. One just has to know how to recognize it. The problem is that this change comes in small increments -- sometimes as small as one storefront upgrade that transforms a block -- scattered all over town, seldom concentrated in one neighborhood.

This is clearly evidenced by the weekly calendar of the Landmarks Commission that reflects mostly positive change all over the city. But little attention is paid to this three-days-a-month process unless some blockbuster proposal appears on the calendar. The more significant and meaningful changes remain below the radar but are constant and numerous. It is easier to celebrate, photograph or write about one big new building than the many different and significant alterations occurring to old ones.

One of the things I grew to appreciate more than anything in the almost eight years on the Commission is the value commissioners genuinely give to public testimony. I don't know of another agency where the public input has as good a chance of influencing a commission's decision. This, of course, is to the credit of the individual commissioners who are an alert, dedicated and caring lot.

Above all, public testimony at the Landmarks Commission makes clear that historic preservation does more than anything else to keep the character of the city's individual and distinct neighborhoods in tact and vibrant. The pride of place exhibited weekly in public testimony is extraordinary. New York is stronger than most cities because so much of its authentic fabric survives. Without the Landmarks Preservation Commission -- about which and on which I have offered my share of criticism -- this would not be true.

Roberta Brandes Gratz, author of The Battle For Gotham: New York in the Shadow of Robert Moses and Jane Jacobs, and other books, served almost eight years on the Landmarks Preservation Commission and was recently appointed by Mayor Bloomberg to the Sustainability Advisory Board.