In response to a letter from a mom questioning why Lands' End sells interesting science-themed tees for boys -- but not girls -- the brand has announced new girls' science shirts.

When New Jersey mom Lisa Ryder noticed the discrepancy in the Lands' End catalog earlier this July, she posted a message on their Facebook page which subsequently went viral. It read:

My nine year old daughter loves science; She especially enjoys learning about ocean life and outer space. She has read more books on sharks than I ever knew existed, follows NASA news, and hopes to be an astronaut one day.

So you can imagine her reaction when she saw your company's science-themed t-shirt designs for boys featured on page 26 of your latest catalog. The boys' options include realistic images of planets and our solar system, labeled diagrams of sharks and dinosaurs, and a "NASA Crew" tee design that she immediately declared to be "the coolest shirt ever."

We immediately flipped forward in your catalog to find the equivalent shirts in girls' sizes. But when we got to the available t-shirt designs for girls on page 56, instead of science-themed art, we were treated to sparkly tees with rhinestones, non-realistic looking stars, and a design featuring a dog dressed like a princess and wearing a tutu.

My daughter was very confused. Lots of her friends that are girls love science, too. Why were there no cool science shirts for girls?

So, Lands' End corporate, how should I respond to my daughter's question? In 2014, why are you selling "mighty" tees for boys and "adorable" tees for girls? (Descriptions taken straight from your marketing copy.)

My daughter is mighty and she loves science. And until you recognize that it's not only boys that can fit that description, I'm afraid our family will no longer be shopping in your stores.

Because of the overwhelming response from other parents in agreement with Ryder, the brand announced the release of new science-themed tees for girls on Facebook Wednesday morning.

"You asked, we listened -- take a look at our brand-new girls’ science tees. Our first two tees are live on the site -- pre-order now to reserve her size (due to the quick turnaround, the shirts will ship in August). Based on your response to the tees, we will continue to add new styles moving forward," the company wrote, linking to this shirt on their site: 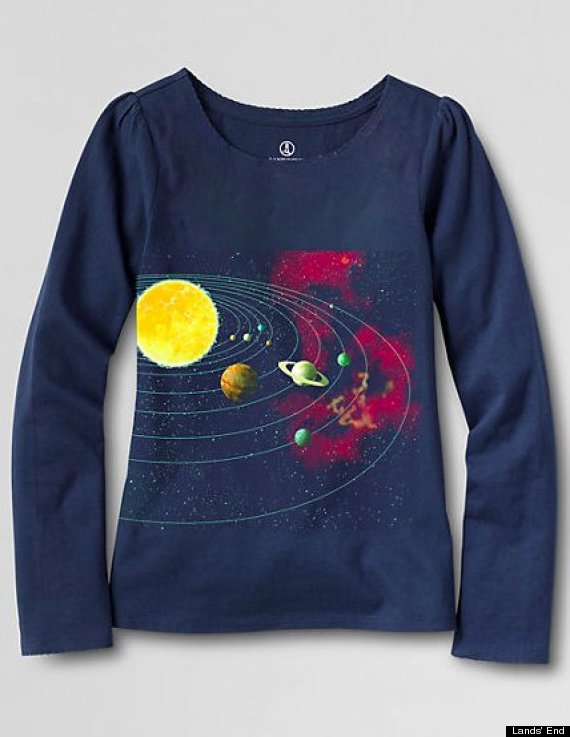 Though comments on their announcement were generally positive -- "Whoo hoo! Getting one for my niece. Paleontology next, please?," one read -- not all parents are praising the brand.

Mom Kim Higgins told The Huffington Post that she has been complaining to Lands' Ends for years "about the terrible gender stereotyping of their merchandise." In a 2010 Facebook post, Higgins asked, "Girls like more than just ponies roller skates and jump ropes. Why wouldn't girls like national parks, sports and big city adventures?" So, the response from the company was not as timely as it appears, Higgins claims.

Regardless of timing however, parents on Facebook are very excited to shop for their science-loving girls. "Perfect timing! We homeschool and my daughter will be studying astronomy this year!," wrote mom Becca Newkirk-Heath. Better late than never!