Update 4/23: Lane Bryant released documents from ABC specifying when the commercial could be aired--during daytime dramas and after 9 p.m. in certain cases. However, the network doesn't give a reason for its decision. 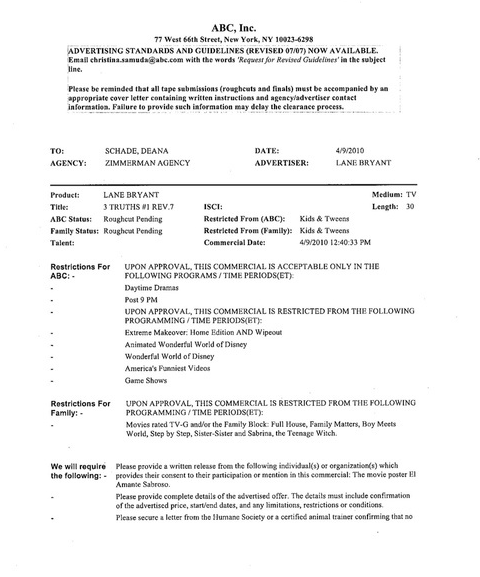 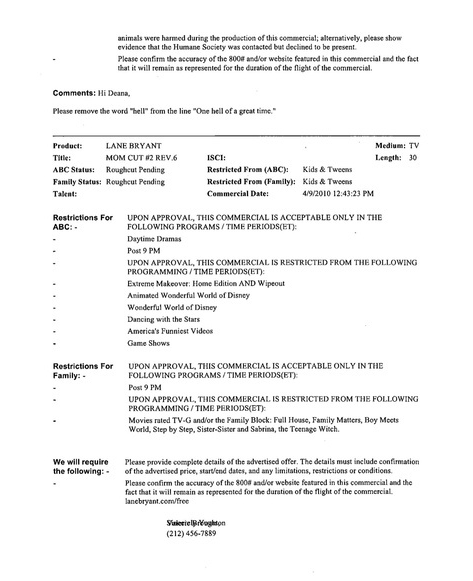 Bill O'Reilly also weighed in on the matter, coming to the conclusion that with plus-size models, you get more cleavage.

Plus size clothing retailer Lane Bryant criticized Fox and ABC for refusing to air a sexy lingerie commercial, but later deleted an accusatory post on its Inside Curve blog saying the networks embrace a double standard of beauty.

AdWeek still has some of the text of Lane Bryant's post, which read:

"ABC and Fox have made the decision to define beauty for you by denying our new, groundbreaking Cacique commercial from airing freely on their networks."

The post also claims that ABC "restricted our airtime" and refused to air the spot during Dancing With the Stars, while Fox "demanded excessive re-edits and rebuffed it three times before relenting to air it during the final 10 minutes of American Idol, but only after we threatened to pull the ad buy."

The post continues: "Yes, these are the same networks that have scantily-clad housewives so desperate they seduce every man on the block -- and don't forget Bart Simpson, who has shown us the moon more often than NASA, all in what they call "family hour."

"While it's no secret that Victoria's Secret 'The Nakeds' ads are prancing around on major networks leaving little to the imagination, steaming up TV screens and baring nearly everything but their souls, our sultry siren who shows sophisticated sass is somehow deemed inappropriate ... Does this smack of a double standard? Yep. It does to us, too."

But as of today, the post and the ad (which was viewable on YouTube) have been taken down. Neither TV network has commented on the issue.