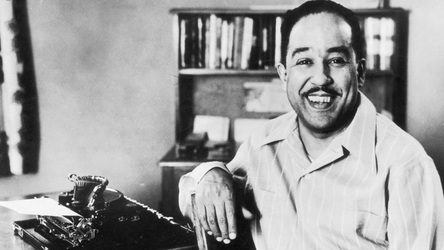 Langston Hughes -- the poet, novelist, playwright, and short-story writer -- was born 113 years ago yesterday. His "Dream Deferred" -- one of the most famous poems in American literary history -- reflects Hughes's brilliance as a writer as well as his anger toward injustice, a theme that reappears in much of his work. Many Americans who may have never heard of Hughes have heard these lines from that poem:

What happens to a dream deferred?
Does it dry up
Like a raisin in the sun?

He wrote the poem in 1951, four years before the modern civil rights movement emerged in Montgomery, Alabama. Hughes was already a well-published and respected writer, but the civil rights movement -- and the explosion of interest in black studies and black literature -- boosted his visibility as his writings became widely read in high schools and colleges. The poem appeared to be a prediction of the coming freedom movement and the subsequent urban rebellions of the 1960s.

Hughes was the first African American literary figure to gain widespread critical and popular acclaim. He viewed the struggles and hopes of African Americans as part of the broader movement for social and economic justice. Throughout his adult life, Hughes was a man of the left but also, like his contemporaries Paul Robeson and A. Philip Randolph, deeply involved in the black community and the freedom movement.

Born in 1902, Hughes grew up in Kansas, Illinois, and Ohio and began writing poetry in high school. Upon graduating in 1920, he attended Columbia University for a year and absorbed the dynamic cultural scene of the Harlem Renaissance, the literary and intellectual flowering that fostered a new black identity (the "new Negro") in the 1920s and 1930s.

Hughes was a regular contributor to the two leading black-run magazines of the period -- Charles S. Johnson's Opportunity and W. E. B. Du Bois's the Crisis -- through which he met the major artists, musicians, and political activists of the Harlem scene. In 1921 his poem "The Negro Speaks of Rivers" was published in the Crisis.

In 1924 Hughes was working as a busboy in a Washington, DC, hotel when the famous poet Vachel Lindsay entered the dining room. Hughes slipped several sheets of paper next to Lindsay's plate. Although annoyed by the intrusion, Lindsay nevertheless read Hughes's poem "The Weary Blues." He called for Hughes and asked him, "Who wrote this?" "I did," replied Hughes. The poem won first prize in Opportunity's poetry contest, and Lindsay became one of Hughes's biggest boosters.

In 1926 Hughes published his first volume of poetry, also titled The Weary Blues. He was soon in demand and published other books, including Shakespeare in Harlem, The Dream Keeper, Not Without Laughter, The Ways of White Folks, The Big Sea, and Popo and Fifina. In these and in subsequent poems and stories, Hughes employed the rhythms of black music, especially jazz and blues -- both little known outside the African American community at the time -- which set Hughes's work apart from other writers.

Hughes portrayed the everyday lives of ordinary black people, including their joys, sorrows, music, humor, and routine encounters with racism. But unlike other prominent black poets of that era, such as Countee Cullen, Claude McKay, and Jean Toomer, Hughes sought to tell the stories of blacks in their own vernacular. Hughes was not ashamed of the African American masses. If anything, he was critical of the efforts of many middle-class black Americans to mimic the lifestyles and culture of their white counterparts.

His 1926 essay "The Negro Artist and the Racial Mountain," published in The Nation when Hughes was only twenty-four, became a manifesto for him and other writers and activists who asserted racial pride:

In 1926 Hughes enrolled at the historically black Lincoln University in Pennsylvania, supported by an elderly and wealthy white woman who admired his writing. (One of his classmates was Thurgood Marshall, a future lawyer for the National Association for the Advancement of Colored People and US Supreme Court justice). Upon graduation in 1929, he returned to New York to resume his involvement with the Harlem Renaissance.

His first novel, Not Without Laughter, published in 1930, won the Harmon Gold Medal for literature. Its central character is an African American boy, Sandy, caught between two worlds. His mother works hard, demands respect, and appreciates the middle-class values of the white community around her. His father is footloose and fun loving. Through Sandy's eyes, Hughes reveals the conflicting values and attitudes within the black community, portraying the lives of the characters in intimate detail. Four years later Hughes published a collection of short stories, The Ways of White Folks, about the humorous but often tragic relationships between blacks and whites.

The Depression radicalized Hughes as he watched his family, friends, Harlem, and the country suffer from the economy's collapse. He published poetry in New Masses, a journal tied to the Communist Party. During the Depression, the party actively recruited African Americans and was one of the few interracial political groups to challenge segregation. For example, the party supported the Scottsboro Boys, nine black teenage boys unfairly accused of rape in Alabama in 1931, by raising money for their defense and publicizing the case. The CP also nurtured young blacks activists, lifting them into leadership positions and encouraging their literary talents through its magazines and newspapers and through the John Reed Clubs, a network of organizations that supported and sponsored radical writers and artists.

In 1937 Hughes traveled to Spain to cover the Spanish Civil War for African American newspapers, reflecting the American left's support for the popular forces resisting a takeover by military strongman Francisco Franco, later the country's dictator. Hughes's political views are reflected in "A New Song," originally published in 1933 and revised five years later. "I speak in the name of the black millions," Hughes wrote, "Awakening to action." But he viewed their struggle not only as a battle against racism, but also as part of a crusade for economic justice and equality:

"Revolt! Arise!
The Black
And White World
Shall be one!
The Worker's World!"

His 1935 play Mulatto -- a protest against Jim Crow -- became the longest running Broadway play written by an African American until Lorraine Hansberry's 1958 A Raisin in the Sun.

Hughes's 1936 poem "Let America Be America Again," published in Esquire magazine, reflected his radical views. It contrasts the nation's promise with its mistreatment of his fellow African Americans, the poor, Native Americans, workers, farmers, and immigrants. He hoped to see a day when America would no longer be divided by class and race divisions:

"O, let my land be a land where Liberty
Is crowned with no false patriotic wreath,
But opportunity is real, and life is free,
Equality is in the air we breathe."

In 1942 Hughes began writing a column for the African American newspaper the Chicago Defender, which was the leading black paper in the country and was read nationwide. The column introduced the character of Jesse B. Semple, or Simple. Through Simple, Hughes displayed a remarkable eye and ear for the black experience, using humor and satire to raise serious issues about racial injustice. Simple's voice represented the black Everyman. Hughes featured Simple in his blues-musical play, Simply Heavenly, written in 1957. Simple says,

"I'm broke, busted, and disgusted. And just spent mighty near my last nickel for a paper--and there ain't no news in it about colored folks. Unless we commit murder, robbery or rape, or are being chased by a mob, do we get on the front page, or hardly on the back."

In 1953, at the height of the Cold War, Hughes was called to testify before the Senate Permanent Subcommittee on Investigations, led by Senator Joseph McCarthy. He denied he had ever been a Communist Party member and distanced himself from his previous radical left views. In 1959, when he published Selected Poems, he left out some radical poems. Whether he sincerely rejected his radical past or simply accommodated himself to the realities of being a black writer trying to make a living in Cold War America is unknown. Although he abandoned his Marxist views, he continued to protest the social and racial conditions endured by African Americans.

By the 1950s Hughes was the most popular black poet and writer in the country, but he was primarily known within the African American community. That began to change when the civil rights movement emerged, as more Americans became interested in black history and black culture. He was often called the "Poet Laureate of the Negro Race."

During his lifetime, Hughes published fifteen volumes of poetry, ten novels and collections of short stories, twenty plays and operas (including Mule Bone with Zora Neale Hurston in 1931 and Troubled Island with composer William Grant Still in 1936), two autobiographies, four books about black history, hundreds of magazine articles and newspaper columns, and seven books for children, including books about Africa, the West Indies, jazz, and black history. He translated into English the works of the Spanish poet Federico Garcia Lorca and the Latin American Nobel laureate poet Gabriela Mistral. He died on May 22, 1967.

In Hughes' day, African Americans and homosexuals were both treated like second-class citizens. Hughes embraced his obvious racial identity but hid his homosexuality to all but his close friends. Arnold Rampersad, the author of a two-volume Hughes biography, claims that while the poet preferred the company of African American men, he was probably asexual. But other scholars disagree and argue not only that Hughes was gay, but that it isn't hard to find gay themes in many of his poems. British filmmaker Isaac Julien emphasized Hughes' homosexuality in his 1989 movie, Looking for Langston. In his 1996 film about the March on Washington, Get on the Bus, Spike Lee includes a scene where a gay man punches a homophobic character, then explains: "This is for James Baldwin and Langston Hughes."

Hughes's racial consciousness and pride, as well as his depictions of black life, influenced later generations of artists and activists in Africa and the Caribbean as well as in the United States. During the 1960s he inspired and supported many young black writers, helping shape a new wave of black literature. In his 1967 anthology The Best Short Stories by Negro Writers, Hughes included a short story by a then-unknown Georgia-born writer, Alice Walker, a student at Sarah Lawrence College. "His support for me meant more than I can say," recalled Walker, who has become one of her generation's acclaimed writers.

The playwright Loften Mitchell, a generation younger than Hughes, said, "Langston set a tone, a standard of brotherhood and friendship and cooperation, for all of us to follow. You never got from him, 'I am the Negro writer,' but only 'I am a Negro writer.' He never stopped thinking about the rest of us."

Peter Dreier teaches Politics and chairs the Urban & Environmental Policy Department at Occidental College. His latest book is The 100 Greatest Americans of the 20th Century: A Social Justice Hall of Fame (2012). Langston Hughes is one of the people profiled in the book.