In Philly this month, Shakespearean productions has been blooming along with spring, at the ballet with Midsummer Night's Dream, in repertory with Much Ado About Nothing/Othello at PST and Philly Arts Collective tackling Timon of Athens. At St. Stephens Theater in Center City, a steeled interpretation of Henry V even revives many theatrical traditions from Elizabethan Theater.

Henry V was first performed in a rebuilt Globe Theater. In the opening lines the chorus even wonders if that stage would be adequate to depict King Harry's invasion of Agincourt and his shaky efforts to forge a future peace by marrying Katherine, daughter of the French king. This play, is indeed cinematic in scope. 450 years later, the modestly equipped Lantern Theater and director Charles McMahon solve any issues of scale, with kinetic and fully engaged stagecraft. Theirs is nothing less than an intimate epic.

McMahon cast Ben Dibble, known mostly for his musical comedy roles as Harry, the tentative, vulnerable young King and the actor builds him before our eyes and ears, because he has complete inventive command. His fire in the role flares first as he exposes the conspirators in his own court who plot with the French to kill him. The other 40 or so roles are spread among the other seven cast members. Seeing the seasoned English classical actor, Mal Whyte, switch from the cockney pub wife one minute and into the King of France with sublime line Shakespeare, just astounds. The cast revives a lost art of trading characters, accents and physicality without skipping a beat of drama. And what drama.

Harry, aware of conspiracies and the shift of the European balance of power, rallies the troupes to invade France at Agincourt. David Bardeen barks out the murky lineage of the thrones of Europe, hilariously (that intonation recalls an acid tongue Alan Bates); later Bardeen is equally strong as an array of royals, peasants or soldiers. 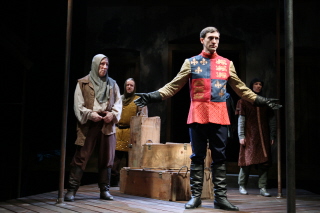 Krista Apple-Hodge is the narrator and takes on the parts of Charles's messenger, or wandering sage or various boy soldiers (an update on gender bending Shakespeare) -- all with incredible focus and resplendent in the lines whether they are in English or in French.

Jake Blouch is the French Dauphin, son and heir to Charles. He stands like a danseur noble and exudes royal finesse. In contrast to Blouch there is also the lusty rogue Pistol, ready to blunder his way into the next sousy fight, pawing his wife (Whythe) and otherwise plays high comedy, but never at the expense of the lines. The versatile Mark Cairns as Exeter is stalwartly noble and as the trench soldier he has one of the most universal antiwar speeches in all of dramatic literature -- the real wages of war -- which he delivers with profound lyrical realism. 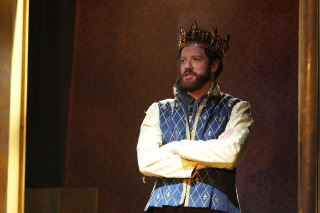 DelMarcelle, the second woman chameleon in the cast gives Katherine, the political bargaining chip, such delicate steel, her chemistry with Dibble in the proposal scene is masterfully played by both actors. Matt Tallman plays noblemen and officer with subtle intensity, and he crafts a sumptuous Brogue in one scene, but it is with Nym, taunting Pistol that he really sings out the lines.

The ¾ platform stage and battlement ruins create a rustic stage environ à la the Globe which light designer Drew Billiau uses to optimal effect with his traveling mis-en-scene illumination (he is in fact, one of the best dance-theater lighting designers around). In contrast to the rustic set, the costume designer Mary Folino created a dazzling Renaissance template of battle gear, royal couture and pub wear, featuring vibrant accessories from chain link gloves to second skin velvets. 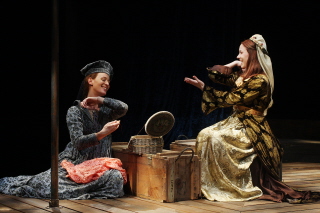 For the battle at Agincourt, McMahon, fight director J. Alex Cordaro, sound designer Michael Kiley and Billiau devise a flash scenes in motion and in freeze frames for unfettered stage pictures that are gritty and linger in the mind.

Dibble's Harry is as wily and complex as Shakespeare's greatest flawed heroes. He mines the Hamlet side of the character in doubt and he just nails the soliloquies with such force and poetry. This is an astonishing, heroic and earthy Henry V framed by a production that would be celebrated anywhere in the world.