Sticky rice, laap, papaya salad: this is Thai food, right? Not originally. These well-known Asian dishes that have traveled the globe to appear on Thai restaurant menus everywhere are actually Laotian in origin. You might not have known that, because compared to neighboring Thailand and Vietnam, Laos has a relatively low profile when it comes to cuisine. To overlook the food in this mountainous, landlocked, stunning country, however, would be a huge mistake. Spicy, bitter and incredibly fun to eat, Laotian cuisine is worth your full attention.

HuffPost Taste spoke with Soulayphet Schwader, the Executive Chef at New York's Laotian-inspired Khe-Yo, to find out everything you need to know for a basic primer on Laotian food. Schwader was born in a village outside of Vientiane, Lao's capital city, before moving to Wichita, Kansas when he was three years old. Wichita is home to a big Laotian community, where Schwader and his family could shop at Laotian markets and eat in Laotian restaurants. When he moved to New York, he was surprised by the dearth of Laotian food -- ingredients and restaurants -- and eventually he opened Khe-Yo, a spectacular restaurant offering even better food.

The first thing to know about Lao food is that sticky rice is the national staple of Laos. Laotian people eat sticky rice, also called glutinous rice, at basically every meal. Schwader told HuffPost Taste that sticky rice is something like "90 percent of [Laotians'] diet." It's "eaten for breakfast, lunch and dinner." Shwader added, "Protein is never the focus." Sticky rice is the centerpiece of every meal, and the next important aspects are vegetables and dipping sauces.

Sticky rice is eaten by itself or used as an edible utensil. You're meant to form a little mound of rice into a scooping device and pick up food with it. If you've never eaten sticky rice this way, give it a try and you'll see what we mean when we say that Laotian food is really fun to eat. 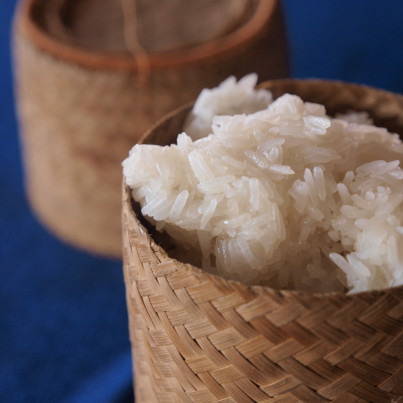 After sticky rice, another national staple is padaek (or padek), which is a paste made from cured, fermented fish. The condiment is about as ubiquitous as sticky rice, which is to say it's eaten with or put in just about everything. Chef Phet, as Schwader's affectionately known, explained that this "stinky stuff" is unique to Laos, and not everyone loves it. It's responsible for the serious umami flavor in Laotian food, imparting a rich taste like anchovies would to Western cuisine. Laotian cuisine practically yells "umami" from the rooftops, and it's got padaek to thank for that.

Schwader told us that he was once on the border of Thailand and Laos, and the same dish, papaya salad, was offered in two versions: Thai or Laotian. The Laotian version contained padaek, or "the funk," as they call it at Khe-Yo.

As umami heavy as Laotian food is, it's equally light on sweet flavors. There's a saying in Laos that "sweet makes you dizzy; bitter makes you healthy." Sweet treats generally come in the form of fresh fruit and, you might have guessed it, sweet sticky rice. The sweet and sour flavor combinations you'll find in other Asian cuisines, however, aren't common in Laos.

Typical dishes include laap (or larb), which is a salad of any kind of minced meat; mok pa, which is fish steamed in a banana leaf; grilled chicken, pork or fish; and jaew, which are dips that might be made from roasted eggplant or tomatoes. Undertones of lemongrass, chilies and galangal, a root in the ginger family, are everywhere, imparting spicy and sour notes that bring awesome heat and layers to dishes. Meals tend to come with a whole slew of condiments and dips, and unless you're eating noodles or noodle soups with chopsticks, you're probably eating with your hands, scooping food up with sticky rice. 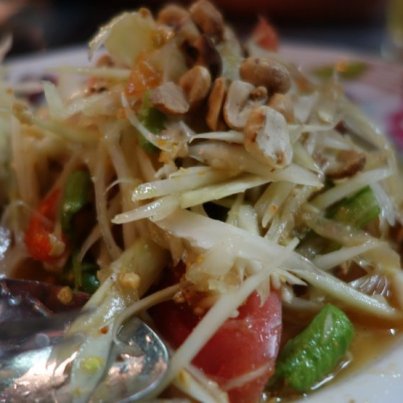 So why isn't Laotian food as well known as Thai, Vietnamese or even Cambodian food? The answer is neither simple nor straightforward. It's a story of migration, within Asia and also outside of the continent. Laos and northeastern Thailand were once part of the same country, and their shared culinary heritage is still visible today. While laap, the minced meat salad, is a Laotian dish, for example, it's also a staple in the northern part of Thailand today. Laotian culinary influence disseminated through Thailand and Laos' other neighboring countries just as Thai, Vietnamese, Cambodian and even Chinese ingredients and techniques have come to Laos over the years. It's difficult to tease apart what is actually "authentic Lao," and like any national cuisine, there are regional and even individual styles and preferences.

In an article for Medium in which Schwader credited the "regional proximity" of Thailand, Laos and Vietnam for the "undeniable similarities," in their cuisine, including "their styles of cooking... many of the same ingredients and traditional preparation methods," he described the difficulty of isolating distinguishing factors among the countries. They're deeper down, at a personal level. "My family, for example, will probably never reach a consensus about whether or not beef jerky should be made with oyster sauce," Schwader wrote.

Not only are the cuisines of Southeast Asia so intertwined, making it difficult for an outsider with a rudimentary understanding of the region to distinguish them, but Laotian food has not been marketed as heavily as Thai or Vietnamese, at least in the United States.

As Thai food spread around the globe, it became more recognizable to call dishes that were originally from Laos, like sticky rice or laap, Thai as opposed to Laotian. It's not just Thai and American people labeling these dishes Thai, either. Even some Laotian immigrants opening restaurants in the United States may have called their restaurants Thai in hopes of attracting more Americans, Schwader confirmed. Furthermore, because of the culinary closeness between the countries, it's not entirely incorrect to call laap Thai, for example. If the laap has padaek, however, that's a different story.

With Northern Thai food becoming more popular in the West, thanks in no small part to the wildly, and deservedly so, popular Pok Pok restaurants, westerners are discovering there's a lot more to Thai food than just pad thai. The cooking techniques and flavors that Northern Thai food shares with Laotian should prime diners' palates for Laotian cuisine. With chefs like Schwader, whose passion for Laotian food and people is evident within five minutes of talking to him, cooking up incredible Laotian food in acclaimed restaurants, the ascent of Laotian food seems inevitable.

If you're curious to try making your own Laotian food, Schwader suggests starting with laap, which could be as easy as mincing your meat, poultry or fish of choice and mixing it with herbs and lime juice. See here for a chicken laap recipe from Epicurious, and check out the food blog Padaek for more recipes. If you live in New York City, Bangkok Center Grocery on Mosco Street in Chinatown carries a lot of Laotian ingredients, or try your local Asian grocery store. Once you start tasting the glory of Laotian food, you'll never look back.

Scenes From A Lao Market