An anti-gay letter from the Los Angeles Police Department chief in 1975 is making the rounds on the internet, and the memo's shocking homphobia shows just how far relations between police and the LGBT community have come.

In May of 1975, then-LAPD Chief Edward Davis was invited to participate in the local Pride parade -- an annual celebration of the LGBT community which first took place in 1970, Letters of Note reports. The invitation came from the LGBT advocacy nonprofit, Christopher Street West, which was organizing the event.

Davis declined the invitation in a letter, saying he "would much rather celebrate 'GAY CONVERSION WEEK' which I will gladly sponsor when the medical practitioners in this country find a way to convert gays to heterosexuals." See the full letter below. 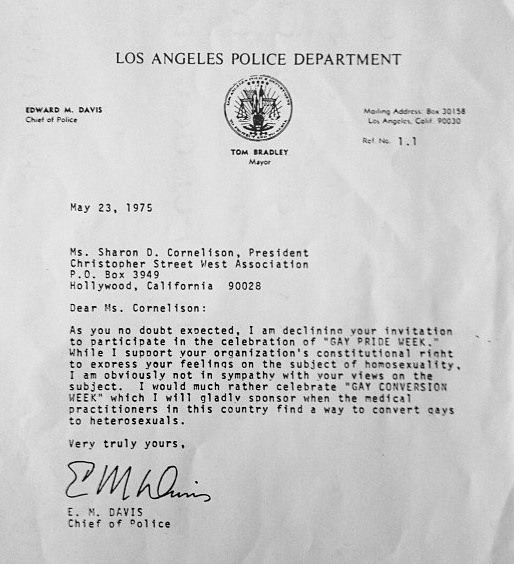 The letter was first posted to Facebook by Kerry Bailey from West Hollywood, where the gay pride parade takes place every year. Neither Bailey nor the LAPD responded to the HuffPost's request for comment.

Davis' anti-gay record went beyond a simple letter. As police chief in 1976, he infamously organized a raid of a gay bathhouse where employees were hosting a charity slave auction to benefit the Gay Community Services Center, the LA Weekly reports. LAPD officials reportedly prepared the raid for months and alerted the media before it started. The next morning, the Orange County Register's headline read, "Police Free Gay Slaves!" The cost of the raid was later estimated at $150,000.

The LAPD has since come a long way in its relationship with LA's LGBT community. The LAPD and LA Sheriff's Department are now two of the largest contingents in West Hollywood's annual gay pride parade. This photo shows both LAPD Chief Charlie Beck and LASD Sheriff Lee Baca leading their groups at Pride last year.

LAPD Gay Conversion Letter: 1975 Police Chief Said He'd Rather Convert Gays Than Participate In Pride
10 Gay Sex Scandals
1 / 11
Jeff Gannon
James Dale Guckert, aka Jeff Gannon, is a conservative reporter who was given access to White House briefings from 2003 to 2005. He was accused of tossing softball questions to President Bush and then accused of involvement with gay pornography and gay prostitution.