LOS ANGELES -- An eyewitness to the killing of Ezell Ford told The Huffington Post on Wednesday that he heard an officer with the Los Angeles Police Department shout "shoot him" before three bullets were unloaded into the unarmed, 25-year-old black man, who was on the ground.

"It is unknown if the suspect has any gang affiliations," the LAPD said in a statement after the killing.

But people in Ford's neighborhood said the young man was not remotely involved in gang activity. Leroy Hill said he was an eyewitness to the shooting Monday night, and confirmed that he heard three shots.

"He wasn't a gang banger at all," Hill said. "I was sitting across the street when it happened. So as he was walking down the street, the police approached him, whatever was said I couldn't hear it, but the cops jumped out of the car and rushed him over here into this corner. They had him in the corner and were beating him, busted him up, for what reason I don't know he didn't do nothing. The next thing I know I hear a 'pow!' while he's on the ground. They got the knee on him. And then I hear another 'pow!' No hesitation. And then I hear another 'pow!' Three times."

At one point while the police had Ford on the ground, but before the shooting took place, Hill said, he heard an officer yell, "Shoot him." 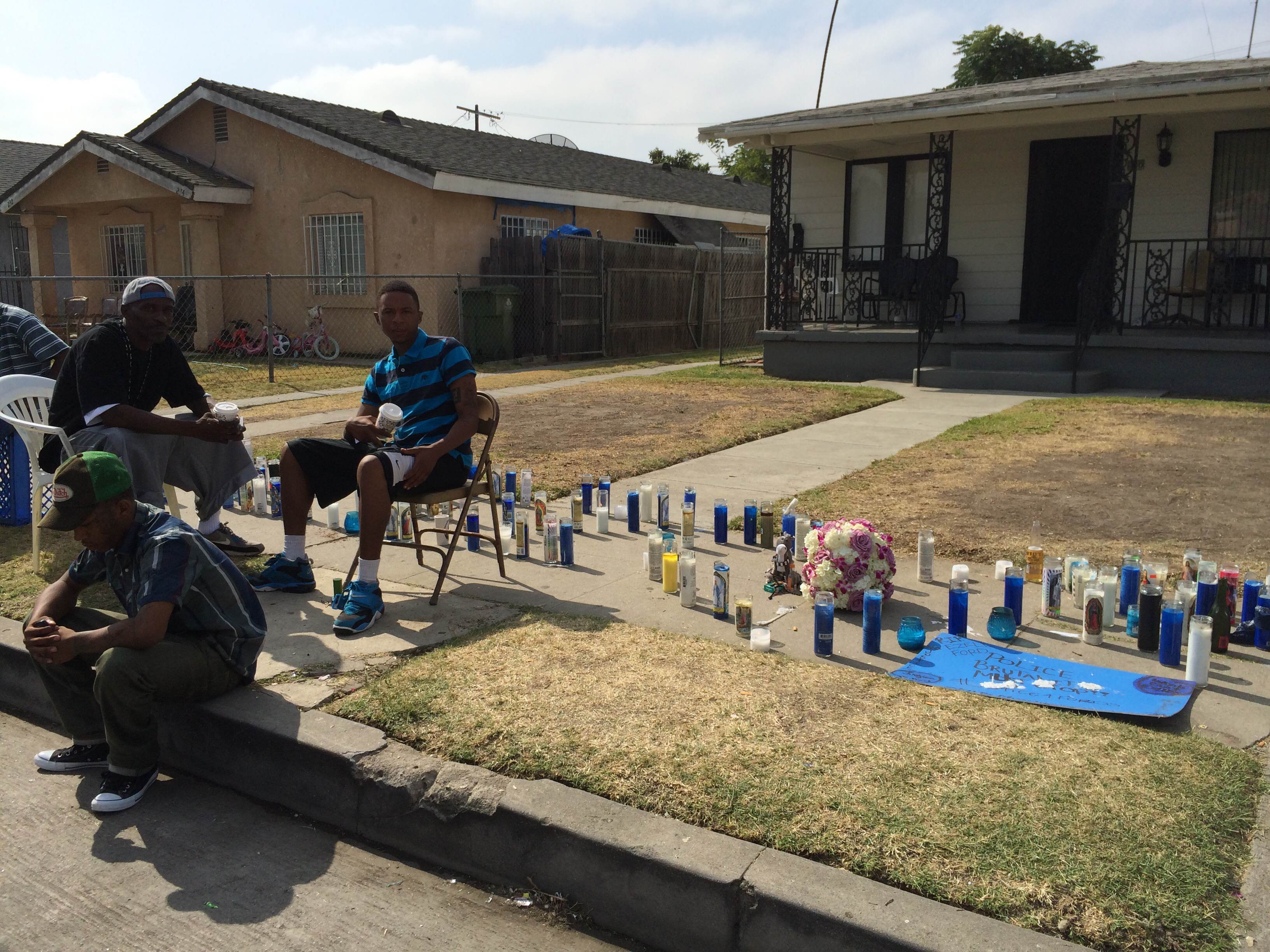 Leroy Hill, far left, and two other neighbors, gather in front of a memorial for Ezell Ford on West 65th Street in South LA Wednesday morning.

Monday around 8:20 p.m., police conducted an "investigative stop" in the 200 block of West 65th Street in the Newton area of South LA, according to an LAPD news release. "During the stop a struggle ensued, which resulted in an officer-involved-shooting," the release says. "The suspect was transported to a local hospital and after lifesaving efforts he succumbed to his injuries."

A woman who identified herself as the deceased man's mother called KTLA and identified the man as Ezell Ford. However, as of Wednesday afternoon, the LAPD had not confirmed the identity of the "suspect." Tritobia Ford said her son was lying on the ground and complying with officers when he was shot three times.

The shooting comes just days after the death of 18-year-old Michael Brown in Ferguson, Missouri. Brown was fatally shot by a police officer in the St. Louis suburb on Saturday. He was unarmed. Dorian Johnson, who was walking with Brown before the shooting occurred, said Brown was retreating from the officer with his hands up when he was shot, CNN reported. Ferguson police, however, say a "physical confrontation" occurred before that.

Unrest has rocked the suburb in the days following Brown's death. At least four people, including two police officers, have been hurt and 47 arrested in the aftermath of the shooting, according to St. Louis' KMOV. 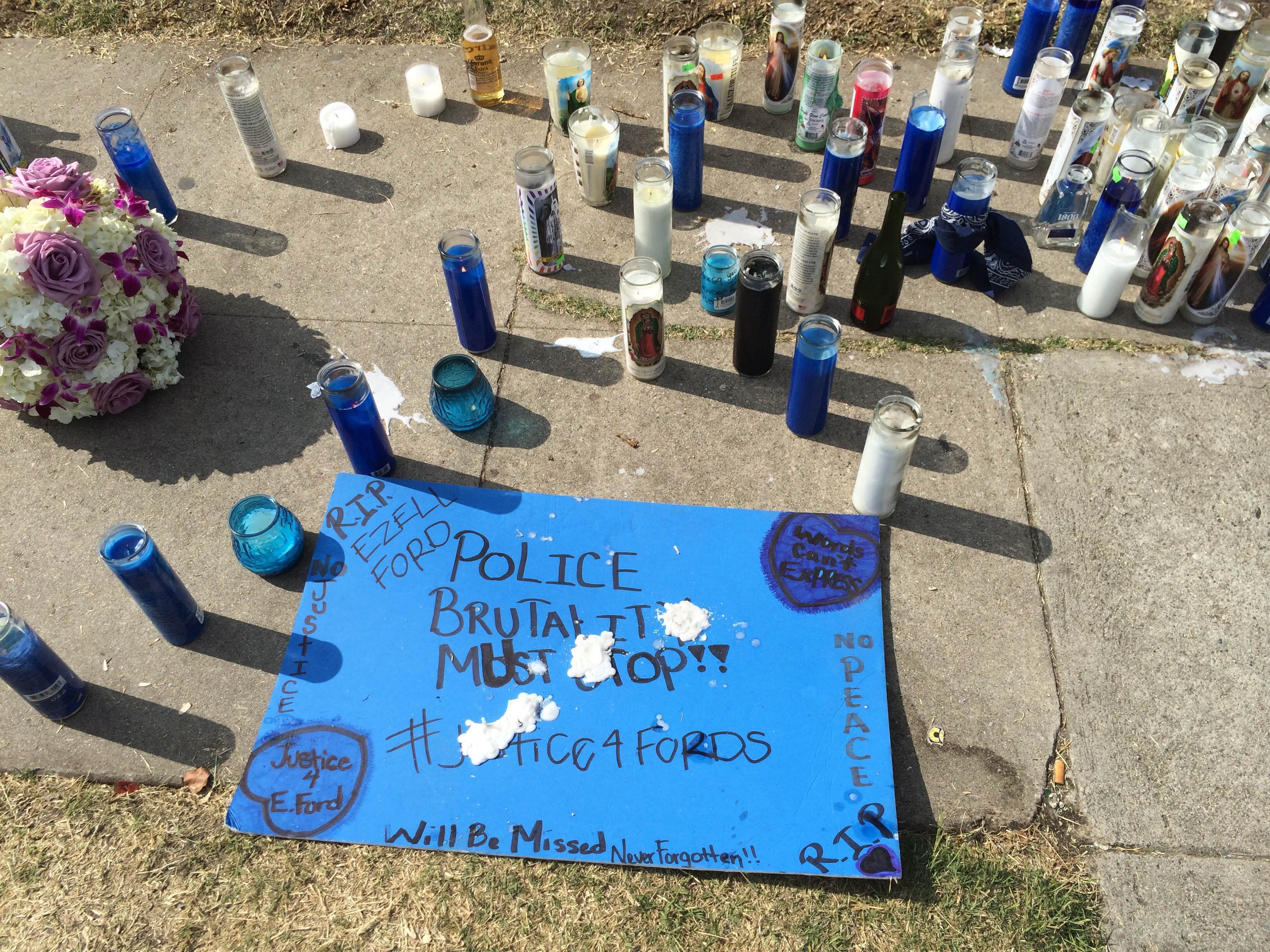 A sign at the memorial for Ezell Ford in South LA.

On Wednesday morning in South LA, a group of about 10 young and middle-aged men gathered at a makeshift sidewalk memorial lined with candles and signs that read "Police brutality must stop."

The men at the memorial near the sight of the shooting were visibly shaken by the events that had unfolded there Monday night. They expressed anger toward the LAPD. They said that Ford wasn't a gang member at all -- that he was a "good guy," a local man who was born and raised in the neighborhood, one whom everyone knew and liked, who routinely played basketball and who also suffered from some form of mental illness.

While all of the men said Ford suffered from some mental illness, they couldn't confirm what it was. One young neighbor, who requested to not be identified, said that while "he wasn't all there, he was there enough to follow orders and know to stop when the police tell him to stop. He did nothing wrong."

Another eyewitness told KTLA that Ford's mental state was well-known in the neighborhood and to the police.

"They laid him out and for whatever reason, they shot him in the back, knowing mentally, he has complications. Every officer in this area, from the Newton Division, knows that -- that this child has mental problems," the man said in an interview with the local network. "The excessive force ... there was no purpose for it. The multiple shootings in the back while he's laying down? No. Then when the mom comes, they don't try to console her ... they pull the billy clubs out."

The young neighbor described the incident as "racial bullshit." All of the men at the memorial told HuffPost that police routinely patrol their neighborhood, a gesture that, they said, feels aggressive as opposed to an act of peace-keeping. During the brief 10 minutes HuffPost was at the scene, two squad cars were observed driving by the main intersection of South Broadway and West 65th Street. 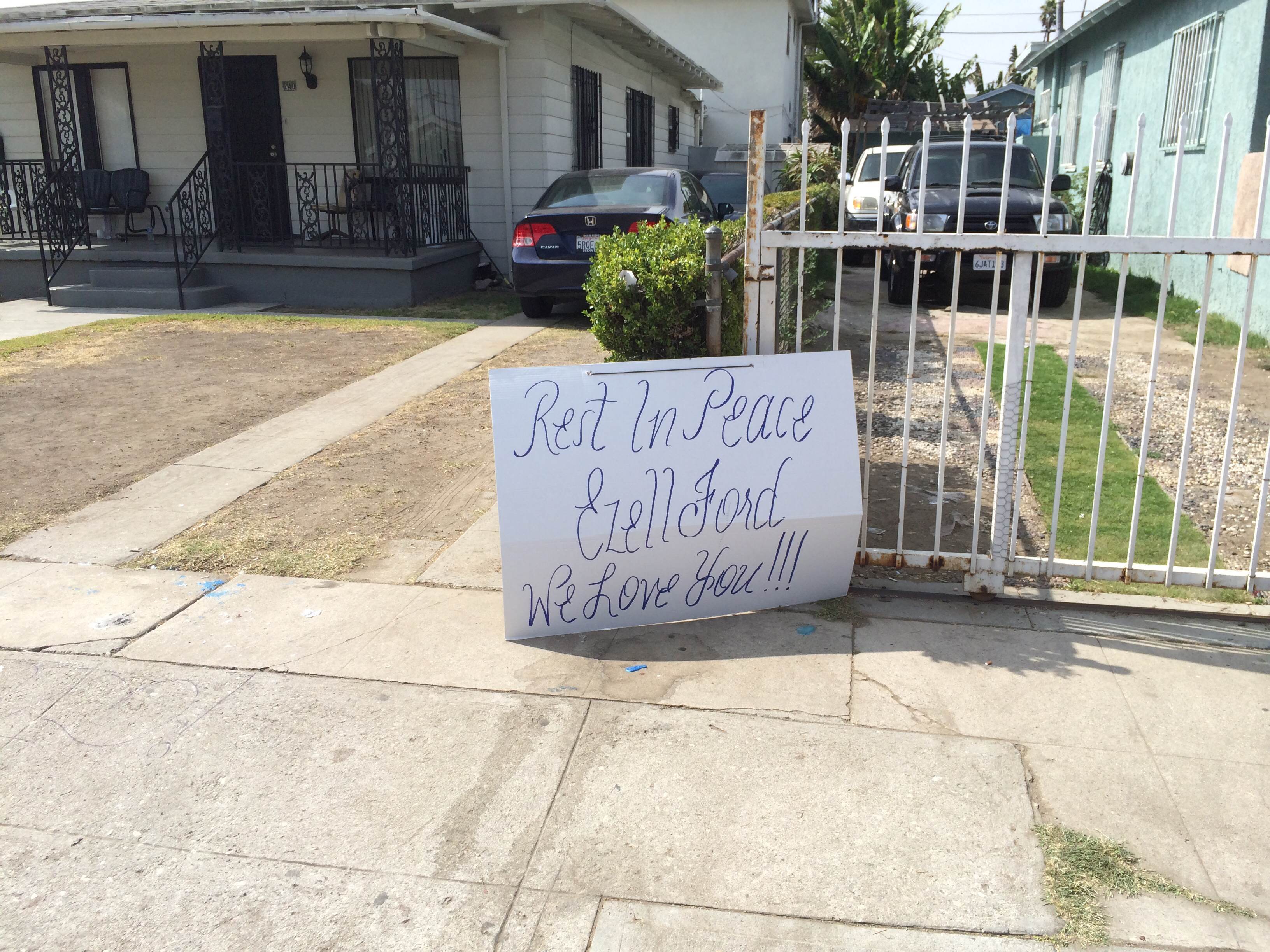 A middle-aged neighbor took the allegations of aggressive police officers a step further, saying that the same officers who were involved in the incident on Monday night had come through the neighborhood the day before and harassed Ford. He also alleged that wasn't the first time the police had "targeted" Ford and harassed him while he walked down the street.

"The day before they were messing with him and they came back the next day and made good on it," the neighbor said.

No officers were injured during the incident, according to the LAPD. The Force Investigation Division is set to investigate.

When reached by HuffPost, the LAPD declined to comment on the allegations because there is an ongoing and active investigation. "When new information becomes available, it will be released," Officer Bruce Borihanh told HuffPost.

UPDATE: 8 p.m. -- LAPD issued a statement that describes what happened:

"After the officers fired their handguns at the individual, they were able to handcuff him and call for a rescue ambulance. Los Angeles Fire Department paramedics arrived and transported the individual to the hospital where he was later pronounced dead."