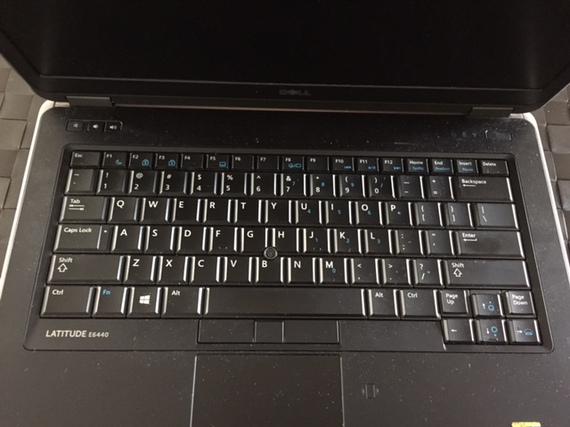 We waited and watched until he passed through the brief security line at the airport, the same way we always did after one of his visits home. Seeing him across those barriers, far from my reach, never failed to remind me that he was an adult, and that most of what happened to him was out of my control. This time, his first visit back since his college graduation, instead of giving us the wave that signaled all was fine, our son began pacing back and forth like a dog who'd lost his bone.

What's missing? I texted him, hoping it wasn't his cell phone.

You tell security? I inquired.

They need to know ASAP to stop someone, I offered, as if he hadn't thought of it.

No reply. Then I saw him pick up his phone and make a call.

What's happening? I texted impatiently when he was done.

Hold on, he wrote me back, walking towards a TSA employee.

I was looking right at him across the great security divide between us. There were only a few people in line, and lots of agents.

My phone rang. It was my son.

"They gave me a number and told me to call the police. I did," he said. "They said they can't do anything, only the police can -- it's not part of their job. I need to wait for them to come."

Another 10 minutes passed, a good 20 since his laptop had disappeared, and it was clear that nobody besides the passengers was in any particular rush. How lucky for the person who took it.

I asked an airline associate sitting nearby if anyone could make an announcement. He pointed to a white phone on the wall. I picked it up and entered the numbers listed. Within seconds of explaining what had happened a voice came on the speaker system and asked anyone who had mistakenly taken a laptop from our security area, to please return it.

That sounded good in theory.

The laptop was worth far more to my son than just its monetary value -- it was key to the journalism career he was working to build. With a story due later that day - a story that was on his computer -- this loss was going to hurt in more ways than one.

"Take your laptops out and put them in a bin," the TSA officers continued to tell the growing line of passengers snaking their way through.

I glanced over at the wall phone again. This time I entered the code for the airport police. Just as they answered, a police officer happened by. I called out to him. "Most of the time, laptops aren't stolen, they're just left in the bins," he told us. He'd heard about the theft and explained that the delay was because our son had given the wrong security gate number. The officer dispatched couldn't find him. Turns out my son gave the right info, but the other officer went to the wrong gate. The policeman offered to help.

By now, my husband and I were making contingency plans for the computer, hoping our backup system had saved everything our son needed to access. In a brief call to him, we strongly suggested he get on his flight, and give our number to the police as a local contact. This, as it turns out, is not possible, BTW -- if your kid is over 18, you really are persona non grata.

It was 10 minutes till boarding when my son called again.

"The police reviewed security footage," he said. "There was a grainy image of a guy taking my computer. They went to look for him."

Just when his plane began boarding, we received this text: They found it. Hold on...

There were now two police officers involved. They'd caught up with our son, apologized for being unable to locate the perpetrator, and were taking his contact info when one of them spotted the guy in the grainy video sitting with a friend at a bar. He wasn't far from the security area. The officer asked him for his backpack. Guess what was inside?

The guy who took it said it was an accident -- he didn't mean to -- as did his friend, who was getting so obnoxious confronting our son that the officer threatened to arrest him if he didn't shut up.

Then the officer gave our son two options: file a report which would cause him to miss his flight but allow them to arrest the guy right then and there, or, take the laptop, get on the plane, and no charges would be filed. Paperwork would follow by email.

Our son thanked the officers, took the laptop, and was about to get on the plane when he learned that the thief was on his flight. To avoid the two crossing paths, the officer had our son seated first. I only learned of this last juicy detail the next day, when my son admitted he hadn't wanted to tell us earlier, because he knew we'd probably be worried.

It's the very scenario my husband and I talked about on our drive home. "Can you imagine if that guy ended up on his flight?" I said. "Surely, they'd at least kick him off. Make him lose his ticket."

Of course, we were thrilled that the laptop was found and grateful for the officers who found it.

As for the bandit and what's become of him, we know nothing. My son's still waiting for the paperwork.

Melissa's first book: From Mom to Me Again: How I Survived My First Empty-Nest Year And Reinvented the Rest of My Life will be published by Sourcebooks in July.