An extremely rare particle measurement from the world's largest atom smasher could cast doubt on a popular theory about the fundamental building blocks of the universe, including dark matter.

Physicists from the Large Hadron Collider (LHC) in Switzerland have measured a particular type of particle transformation for the first time, and found that it happens just about as often as predicted by the dominant theory of particle physics, called the Standard Model.

The measurement is just preliminary — the researchers haven't collected enough data to be positive what they're seeing isn't just a random occurrence. Still, the fact that the initial observations correspond so well with the Standard Model predictions isn't a hopeful sign for what scientists call "new physics," such as new particles not predicted by the Standard Model.

One of the most popular theories of new physics is the idea of "supersymmetry" — that all of the known subatomic particles have "superpartner" particles that haven't yet been observed. If these superpartners exist, they could help explain some persistent physics mysteries, such as the nature of dark matter, an invisible substance thought to make up a quarter of the universe. Scientists think dark matter may in fact be composed of supersymmetric particles that haven't yet been detected.

This diagram illustrates the collision of two protons inside the Large Hadron Collider, creating a spray of other particles, including a B_s meson (blue) that decays into two muons (purple).

While the new measurement, reported today (Nov. 12) by physicists at the Large Hadron Collider's LHCb experiment, doesn't disprove this idea, it doesn't support it, either. [Photos: The World's Largest Atom Smasher (LHC)]

"Many new physics theories receive a hard blow by the very good match between Standard Model prediction and observed rate," particle physicist Tommaso Dorigo, who works on a separate experiment at the Large Hadron Collider called CMS, wrote today on his blog.

The LHCb scientists reported that they'd observed signs of particles called B_s ("B-sub-S") mesons, which are made of a bottom anti-quark bound to a strange quark ("bottom" and "strange" are two flavors of quarks, and anti-quarks are the antimatter partner particles of normal matter quarks), decaying into two particles called muons. 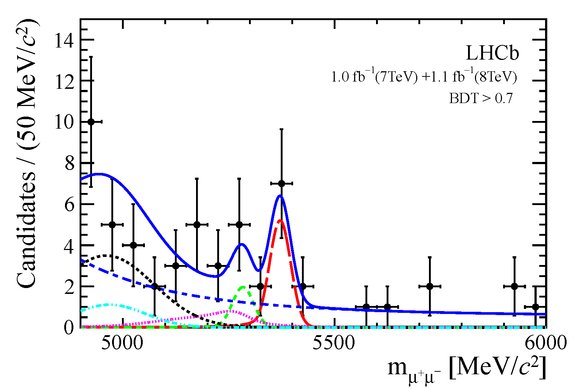 In this chart, the red dashed line represents the signal seen inside the Large Hadron Collider of B_s mesons decaying into pairs of muons.

B_s mesons are unstable particles that aren't normally found on Earth, but are sometimes created when protons are smashed head-on into each other after being sped up to near the speed of light around the LHC's 17-mile (27 kilometers) underground ring. The resulting explosion creates a plethora of exotic particles, including significant amounts of B_s mesons.

These particles are predicted to decay into pairs of muons by the Standard Model, but only very, very rarely — about three times in every 1 billion total decays of B_s mesons. Usually, these particles transform into other things.

Particle physics experiments, including the now-retired Tevatron collider in Illinois, have searched for this decay for two decades, without luck until now. In March of this year, LHCb physicists announced they'd placed limits on how often the decay can occur, but now they report the first evidence for its occurrence.

"It's a great testament to their ability to pick out this extremely rare decay mode and apparently see a signal," said theoretical physicist Lance Dixon of the SLAC National Accelerator Laboratory in California.

However, more data will need to be collected to confirm that the decay — "the rarest ever seen," according to LHCb scientists — really and truly took place.

This preliminary measurement from LHCb found that the rare decay process happened about 3.2 times for every 1 billion total decays — very close to the predicted value of three. If the frequency of this process was much different from the Standard Model's projections, that might indicate that new particles, such as supersymmetric partners, were affecting the process. For example, some models predict that supersymmetric particles would boost the frequency of this type of decay.

"Right now, the central value of the measurement is remarkably close to the central value of the Standard Model prediction," Dixon told LiveScience. "That means that masses of these supersymmetric particles are either heavier than optimists had suspected before, or there's something funny about the spectrum [of supersymmetric particle masses] that suppresses these signals."

Still, the researchers aren't giving up on finding new physics beyond what's predicted by the Standard Model — they'll just have to dig a little deeper.

"Supersymmetry is not ruled out by our measurement but it is strongly confined," LHCb spokesperson Pierluigi Campana said in a statement. "This measurement is a sort of checkup of the Standard Model and today it appears healthier than it was yesterday."

"We believe that new data from the LHC and more sophisticated analyses will eventually allow us to find a chink in the Standard Model’s armor," Campana added.

The LHCb scientists reported their results today at the Hadron Collider Particle Symposium in Kyoto, Japan.