A brushfire believed to be one of the largest in the history of the city of Los Angeles has scorched some 7,000 acres of land in California, destroyed four homes and prompted Gov. Jerry Brown to declare a state of emergency.

“As long as the weather continues to cooperate, I am very confident and convinced we’ll be fine,” he said. But he stressed that fire operations are ongoing and “there is still a lot of work to be done.”

More than a thousand firefighters are currently working to control the blaze, which erupted on Friday. Several aircraft have been dropping water and fire retardant on hot spots.

As of Monday, the fire had charred 7,003 acres — a number Terrazas said he anticipates will increase “slightly” in the coming days. It is now 30 percent contained — up from 10 percent containment early Sunday morning. Four firefighters have suffered heat-related illnesses, and another was treated for minor burns. All are in stable condition, according to Terrazas.

The flames have also destroyed four houses. Terrazas said Monday that the low number is a “testament to the outstanding work” of area firefighters.

Since Friday, the blaze forced the evacuation of hundreds of homes in areas such as Los Angeles, Burbank and Glendale. By Sunday night, however, all mandatory evacuation orders had been lifted.

“Visually you can see we’ve turned a corner, but this is not over, with winds this strong, anything can still happen,” Los Angeles Mayor Eric Garcetti told CBS News on Monday.

Garcetti signed a declaration of local emergency on Saturday instructing all city agencies to “take all necessary steps to protect life and property in the area.” And on Sunday, Brown proclaimed a state of emergency.

“We’re confident, back to 1961 — the Bel Air Fire — that this is the largest fire, by acreage, within the city of Los Angeles,” Terrazas said. The Bel Air Fire scorched 6,090 acres and destroyed 484 costly residences and 21 other buildings, according to a historical archive kept by LAFD.

Clarification: Language in this story’s text and headline has been amended to clarify that the fire is thought to be one of the largest in the history of the city of LA, not Los Angeles County. 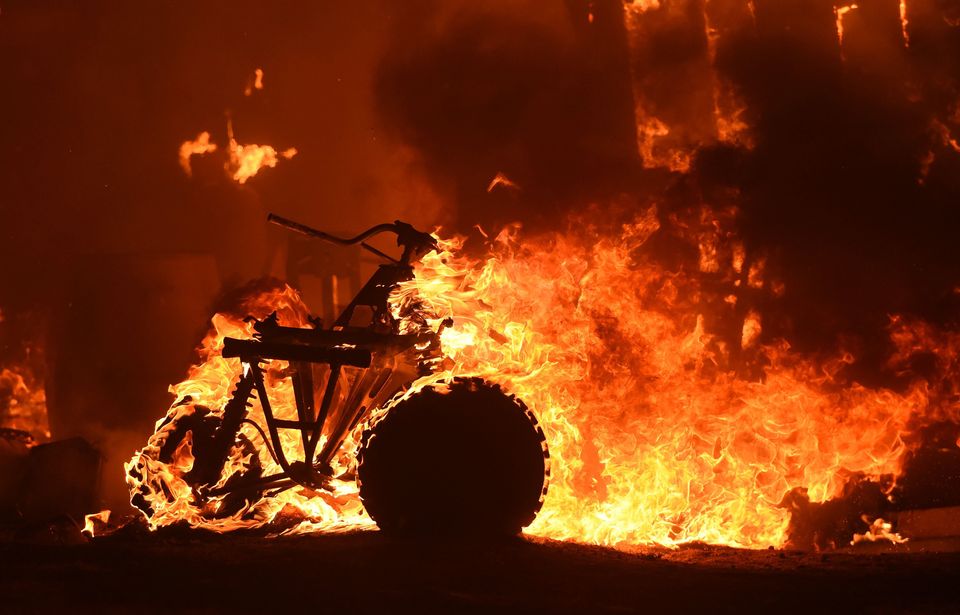 1 / 12
An all-terrain vehicle burns during a wildfire in a residential area near Oroville, California on July 9, 2017.&nbsp;
JOSH EDELSON via Getty Images