It's good to be Larry Ellison.

At a net worth of some $43 billion, the Oracle founder is the fifth-richest man in the world. He has the biggest bands in the world playing his private events--even when they seem like they kind of don't want to. He serves as the inspiration for super heroes. His personal yacht racing team holds the America's Cup (the biggest prize in all of competitive sailing). Not only did he he recently buy an entire Hawaiian island, but he also cut a check for the primary airline serving said island.

Now that Ellison is selling his home on the shores of Lake Tahoe, anyone has the opportunity to live like the one percentiest of the one percent. Note: In this case, the category of "anyone" is limited to people with $28.5 million lying around.

"This was originally intended to be his primary home at Lake Tahoe," explained Jennie Fairchild of Chase International Real Estate, the company selling the property. "But later, he had the unique opportunity to design and build a legacy property on the north shore of Lake Tahoe for both himself and his family. That project is scheduled for completion this year"

Designed by Olsen-Olsen Architects, the 2.6-acre property Ellison is selling in Glenbrook, Nev. boasts a 9,242-square foot main house, a 1,325-square foot guesthouse and 230 feet of lakefront. There's a gym, a sauna, a Japanese soaking tub, a billiard room, a waterfall and a completely soundproof movie theater.

The location on the east shore of the lake is known as a "banana belt" because it gets so much sun, according to Ms. Fairchild. Many of the nearby properties are large family estates that are passed down from generation to generation, she says, and rarely come on the market.

Ellison is one of the world's foremost collectors of high-end properties. He also owns a wide swath of land in Malibu, a Rhode Island mansion previously owned by the Astor family and a home in the Southern California desert community of Rancho Mirage that has its own 19-hole golf course. 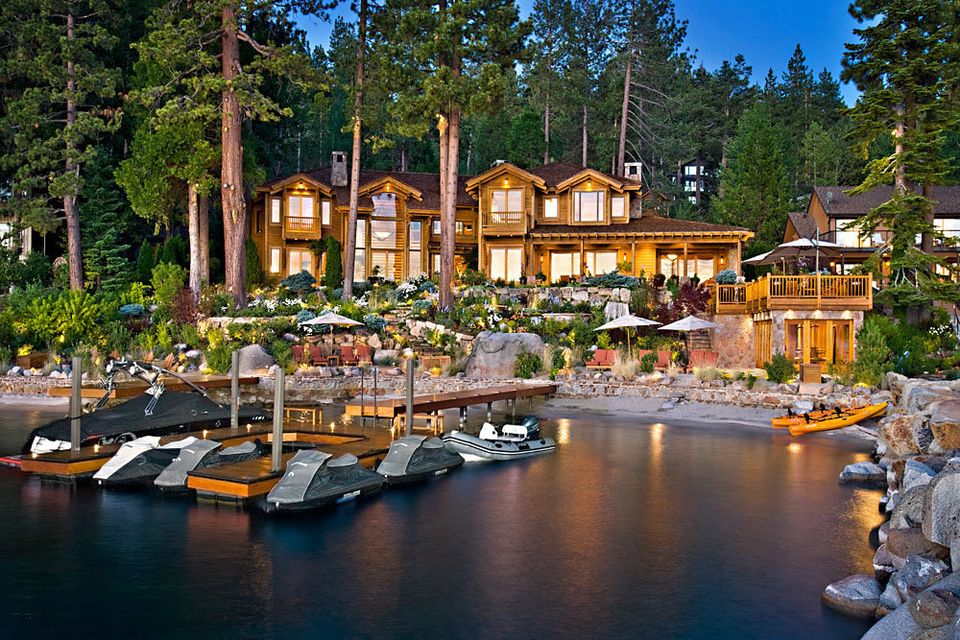