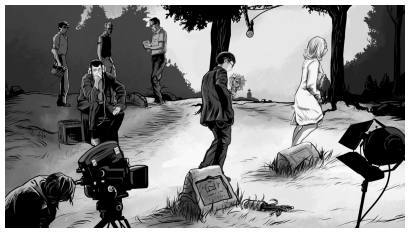 From the societal upheavals of the 1960s to the not-all-that-more-quiescent twenty-first century, Night of the Living Dead has managed to chill the blood of horror lovers everywhere and simultaneously cast an unsettling light on the media, racial politics, and the American way of life in general. Now there's a new documentary, Birth of the Living Dead, that uses clips, interviews, and some evocative animation by artist Gary Pullin to not only tell the tale of how George Romero and crew took a shoestring budget and managed to create a film the rewrote the rules of horror, but also explore how this humble tale of the walking dead still manages to resonate today.

I sit down with Birth's Executive Producer Larry Fessenden and director Rob Kuhns to talk about what Night means to them, the genesis and influences of their project, and what they hope it will say about Romero's legacy.

Entertainment Night Of The Living Dead