The man who literally wrote the book on how to talk to anyone, anytime, anywhere has died.

Larry King, the legendary TV host and radio personality recognized by his trademark suspenders and black-rimmed glasses, died Saturday morning at the age of 87 after a weekslong battle with COVID-19. He was hospitalized with the disease in late December. He had several health scares in recent years, including multiple heart attacks, a lung cancer diagnosis and a stroke.

King died at the Cedars-Sinai Medical Center in Los Angeles. The news was announced “with profound sadness” on his official Twitter account by the company he co-founded, Ora Media:

“For 63 years and across the platforms of radio, television and digital media, Larry’s many thousands of interviews, awards, and global acclaim stand as a testament to his unique and lasting talent as a broadcaster,” read the statement.

“Larry always viewed his interview subjects as the true stars of his programs, and himself as merely an unbiased conduit between the guest and audience,” it continued. “Whether he was interviewing a U.S. president, foreign leader, celebrity, scandal-ridden personage, or an everyman, Larry liked to ask short, direct, and uncomplicated questions. He believed concise questions usually provided the best answers, and he was not wrong in that belief.”

CNN President Jeff Zucker paid tribute to King, describing him as “the scrappy young man from Brooklyn” with a “history-making career.”

“We are so proud of the 25 years he spent with CNN, where his newsmaker interviews truly put the network on the international stage,” Zucker said in a statement released on Twitter.

King was best known for his two-and-a-half decade run as the raspy-voiced host of “Larry King Live,” CNN’s longest-running program and one of its most-watched.

He rose above personal tragedy, financial despair and half a dozen divorces to become one of the most revered and prolific interviewers in broadcasting.

King was the recipient of numerous accolades during his life, including several Cable ACE Awards, Peabody Awards and lifetime achievement awards. Most recently, he hosted the talks shows “Larry King Now” and “Politicking With Larry King” on Hulu, OraTV and RT America.

King was born Larry Harvey Zeiger on Nov. 19, 1933, in Brooklyn, New York. He was raised in an Orthodox Jewish household by his parents, Jennie Zeiger (nee Gitlitz), a garment worker from Lithuania, and Aaron Zeiger, a restaurant owner from Ukraine. He had a young brother named Marty.

King was 9 years old when his father died suddenly of a heart attack, forcing his mother to go on welfare. Soon after, the family packed up its home in Brooklyn’s Brownsville neighborhood and moved roughly seven miles southwest to a tiny attic apartment in Bensonhurst.

Larry King was a baseball fanatic from a young age and spent his childhood idolizing the Brooklyn Dodgers and fantasizing about broadcasting their games one day. He later became a die-hard New York Yankees fan after the Dodgers moved to Los Angeles.

“By the time I was in junior high school, I already knew. You could see it in the school yearbook,” King wrote in his 2009 bestselling autobiography, “My Remarkable Journey.” “They asked me what I wanted to be, and I told them: a radio announcer.”

At 23, King took a train to Miami to pursue his dream of working in broadcasting. He landed his first radio job at WAHR (now WMBM), helping to clean and to perform administrative tasks at the small station.

The aspiring broadcaster got his big break a few weeks later when a morning disc jockey suddenly quit, and King was tapped to fill the open spot.

Moments before going on air for the first time, the station manager called him into his office to suggest his new host drop “Zeiger” in favor of a less “ethnic” last name. And so on May 1, 1957, he made his radio debut as Larry King. (He didn’t change his name legally until 1959.)

King gained notoriety after making the switch to local station WKAT, where his morning radio show was broadcast live from a Jewish deli called Pumpernick’s. The show started out by airing interviews with restaurant patrons or staff members before reeling in enough listeners to attract big names such as Bobby Darin and Jimmy Hoffa.

The Pumpernick’s spot created more opportunity for King to pick up other local gigs, including a weekly interview show at a small TV station and a column in the Miami Herald.

After bouncing around local radio and TV stations, King’s reign as one of Miami’s most regarded figures came crashing down in 1971 when he was arrested on grand larceny charges.

King’s arrest followed years of poor personal finance decisions in the 1960s that left him nearly broke. When his imprisoned friend gave him thousands of dollars to pass along to a law firm on his behalf, King decided to pay off his own debts with the cash instead. He was slapped with the charges shortly after his former friend was released from prison.

Though the case was eventually dismissed, King’s employers dropped him anyway. It would be years before he was offered another gig in Miami.

King was working at Miami’s WIOD radio station in 1977 when he received the call that would launch his career to the national stage. Ed Little, then president of the Mutual Broadcasting System radio network, offered him his own all-night national radio talk show.

From midnight to 5:30 a.m. Eastern Time every weeknight until its final broadcast in 2010, King interviewed guests and took questions from callers. The show won a Peabody Award in 1982 and captured the attention of listeners across the country, including media mogul Ted Turner.

In 1985, Turner hired King to host a nightly hourlong TV show on CNN, which had launched in 1980. The opportunity would be a defining moment in King’s career.

“Larry King Live” hosted hordes of celebrities — U.S. presidents, world leaders, entertainers and athletes — in the 25 years the show was on the air.

King interviewed nearly everyone worth noting in more than 6,000 episodes of “Larry King Live,” which averaged more than 1 million viewers nightly.

A 1993 episode featuring a debate between Perot and Al Gore won the title of CNN’s most-watched segment until 2015.

King was often criticized for throwing out softball questions, though he denied this was intentional. He preferred his interviews to develop organically, adopting a more conversational style rather than sticking to a script or preparing a set of questions, he said.

“You’ve got to know basics,” he wrote in his autobiography. “But if you have the time to draw people out, I find it’s better to know very little. You can always get into the whos, whats, and whys. It’s not only better than knowing too many of the whos ― it’s more fun.”

His unthreatening style appealed to guests and scored him countless interviews with people who would otherwise skip journalists who would pose more aggressive questions. New York Times columnist Maureen Dowd once called his show “the resort area of American journalism.”

King was drawn to celebrity gossip, sometimes devoting the bulk of a segment to a scandal rather than to serious news coverage. His show received record-high ratings during the infamous O.J. Simpson slow-speed chase on a Los Angeles freeway in a white Bronco.

King shied away from revealing his political leanings for most of his broadcasting career. He briefly abandoned this position when he came out in support of Democratic presidential nominee Hillary Clinton during the 2016 presidential election.

“Larry King Live” ran until December 2010, earning the title of CNN’s longest-running program of all time. In January 2011, British journalist Piers Morgan took over King’s time slot with “Piers Morgan Tonight.” (Morgan’s show was dropped from the network in 2014.)

Besides the Peabodys, King also won GLAAD Media’s Vanguard Award in 1999 and was honored with two lifetime achievement awards: One at the 2011 News & Documentary Emmy Awards and again in 2015 from the Association for International Broadcasting.

He was a prolific writer, authoring more than 20 books, including a novel, a children’s book and his autobiography.

He made cameos in dozens of TV series and movies, including “Ghostbusters,” “Contact” and “Enemy of the State.” He also provided the voice of “Doris the Ugly Stepsister” in three installments of the “Shrek” animated film series.

King suffered multiple heart attacks in the decades leading up to his death. He was a heavy smoker but never touched a cigarette again after his first heart attack in 1987. After receiving quintuple bypass heart surgery in 1988, King founded the Larry King Cardiac Foundation to help patients afford expensive treatments associated with heart-related illnesses.

King wasn’t shy about his love of women and sex. He was known for making numerous trips to the altar, tying the knot eight times over his lifetime ― twice to the same woman.

King married his high school sweetheart, Freda Miller, at 19, though the couple’s parents had the marriage annulled within a year.

In 1961, he married Annette Kaye, but the union ended months later. She gave birth to King’s first child, Larry King Jr., in 1961. The elder King never knew Kaye was pregnant and didn’t know he had a son until 1994, when King Jr. reached out to him at the request of his dying mother.

Playboy Bunny Alene Akins became King’s third wife soon after his split from Kaye. King adopted Akins’ son, Andy, from a previous marriage. The couple divorced in 1963. They remarried in 1968, had a daughter, Chaia King, and divorced again in 1971.

In between King’s two marriages to Akins, he married (and subsequently divorced two years later) fourth wife Mickey Sutphin. They had a daughter, Kelly, who would be adopted by Sutphin’s next husband.

King married his fifth wife, Sharon Lepore, in 1976. By 1983, the marriage had fizzled. He met and married his sixth wife, Julie Alexander, in 1989, before separating the following year.

King’s seventh wife was his last. He met actress and singer Shawn Southwick in front of the Tiffany’s in Beverly Hills, California, in 1996 and married her the following year. They had their first son, Chance, in 1999 and another son, Cannon, in 2000.

Death was a subject King thought about deeply in his later years. Though he was raised Jewish, he declared himself an atheist during various interviews on his shows.

Because he didn’t believe in an afterlife, he told The New York Times in a 2015 profile, he had arranged to be cryogenically frozen and hoped scientists could later revive him with the help of future advancements in modern medicine.

‘‘I can’t get my head around one minute being there and another minute absent,’’ he told the Times before cooly describing his ideal funeral. “I would like the ceremony to begin, ‘Today we are honoring a 160-year-old man who was caught in bed by an irate husband. And the funeral is late because it took six days to wipe the smile off his face.’ ’’

King is survived his sons Larry King Jr., Chance King and Cannon King. He is predeceased by his son Andy King and daughter Chaia King.

PHOTO GALLERY
RIP Celebs: Stars We Lost In 2020
Download
Calling all HuffPost superfans!
Sign up for membership to become a founding member and help shape HuffPost's next chapter
Join HuffPost 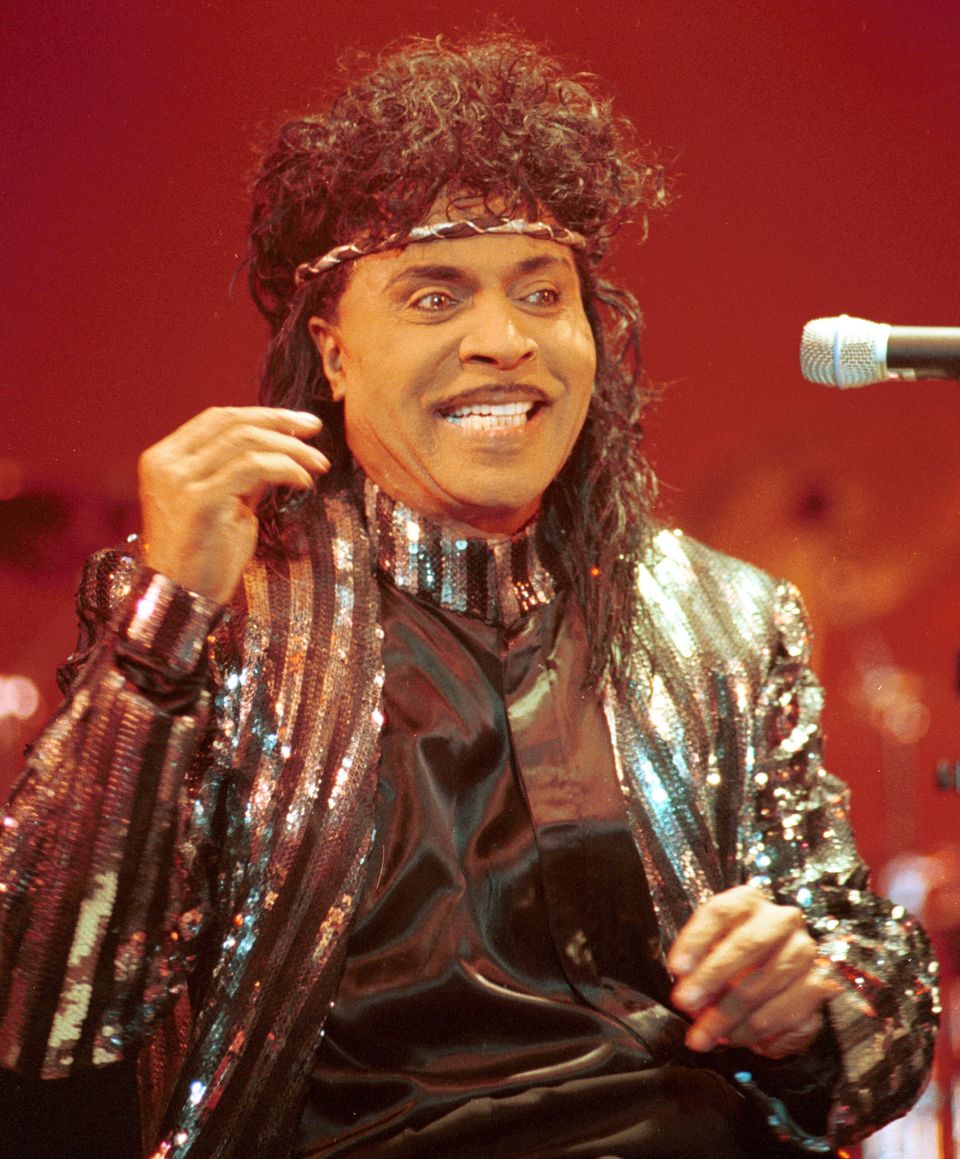 1 / 37
MAY
<strong>Little Richard (1932 - 2020)<br><br></strong>The pioneering rock and roll singer died at his home in Tennessee, shortly after being diagnosed with bone cancer.
Stephen J. Boitano via Getty Images