New York comedian and cabaret star Bridget Everett has been praised for her "dark, savage humor" and "outsize attitude," but critical to her devil-may-care persona is a sassy, almost Grecian wardrobe that often leaves little to the imagination.

It makes perfect sense, then, that the man behind Everett's slinky looks is very much a visual artist and a performer in his own right. Larry Krone, a 45-year-old native Midwesterner who's been dubbed an "alt-couturier," has been styling singers and dancers for some time, including Adrienne Truscott, Kathleen Hanna and Neal Medlyn (also known as Champagne Jerry). Everett, however, has been a critical muse when it came to establishing the House of Larréon, Krone's line of custom gowns and stage costumes, in 2010.

Even though he began creating Western-inspired costumes for his own performances through Larry Krone BRAND in 1997, Krone shrugs off the traditional "fashion designer" label when it comes to his own work. Noting that a House of Larréon ensemble involves "poor taste, at least to some degree," Krone said, "Labels creep me out and trends seem so silly. So much of the time I see clothes by designers that look so silly that I figure they must be in on the joke, but then I realize it's completely [not] ironic."

On April 14, Joe's Pub at New York's Public Theater hosted a benefit concert that will subsidize the production of Look Book, Krone's forthcoming art book which features photography by Todd Oldham. The event included a fashion show as well as live performances by Everett, Champagne Jerry and others.

The Huffington Post chatted with Krone over email about his design work, the Manhattan nightlife scene and his hopes for the new book.

Why did the timing feel right for a book now?
I feel like there is a moment happening right now. A lot of it has to do with Bridget Everett and Joe's Pub. I was making costumes for a long time, but joining forces with Bridget and starting House of Larréon is what has brought me all this attention and encouraged so much cross-pollination among my different performing friends and me. The clothes and the photos in the book tell a story about this exciting creative time and place that is my world right now. 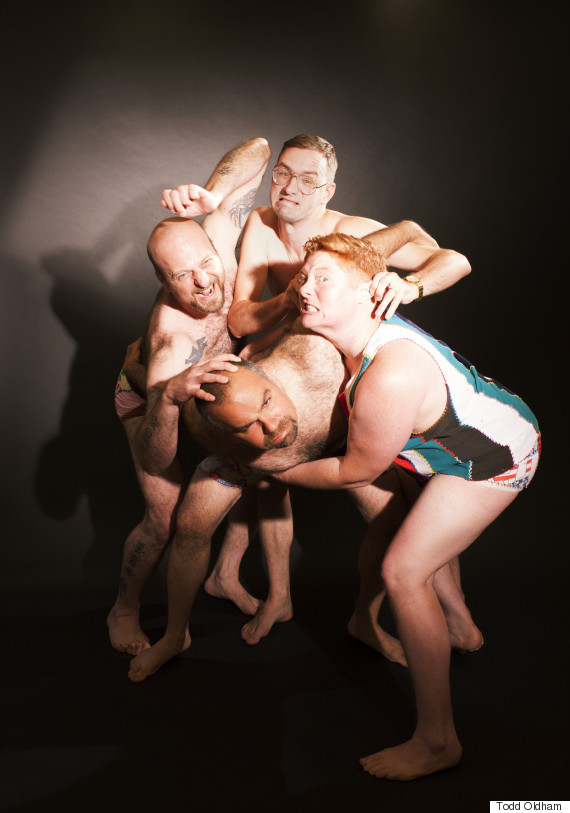 How would you describe the signature House of Larréon look to someone who wasn't familiar with your work?
I started it as a joke on fashion with many of the earliest pieces, teaching myself rudimentary Grecian draping using see-through, glittery spandex. I love imagining that the person wearing them is convinced that they are wearing the most sophisticated, elegant gown even though you could basically wear it to go swimming in. But the joke is often on me, because when Bridget puts on a Larréon and the lights hit her, and her beautiful voice comes out, it does create something legitimately glamorous if I do say so myself.

What do you think separates your work apart from others in the fashion industry?
It’s funny to call it an industry, for one thing. I don't think any of us downtown costume guys approach it that way at all, though I would love for this to start to make me more money! Maybe one thing that separates what I do from others is that I sincerely have no interest in the fashion industry.

"Maybe one thing that separates what I do from others is that I sincerely have no interest in the fashion industry."

I always joke with Bridget that we at House of Larréon love to latch onto a trend exactly at the moment when it has gasped its last breath. Even with all the silliness, though, I must say that the bottom line is that the person wearing it should look and feel gorgeous and confident. I bet this is the same with most of the other designers. One of my favorites is Machine Dazzle and what he does for Taylor Mac and the Dazzle Dancers. 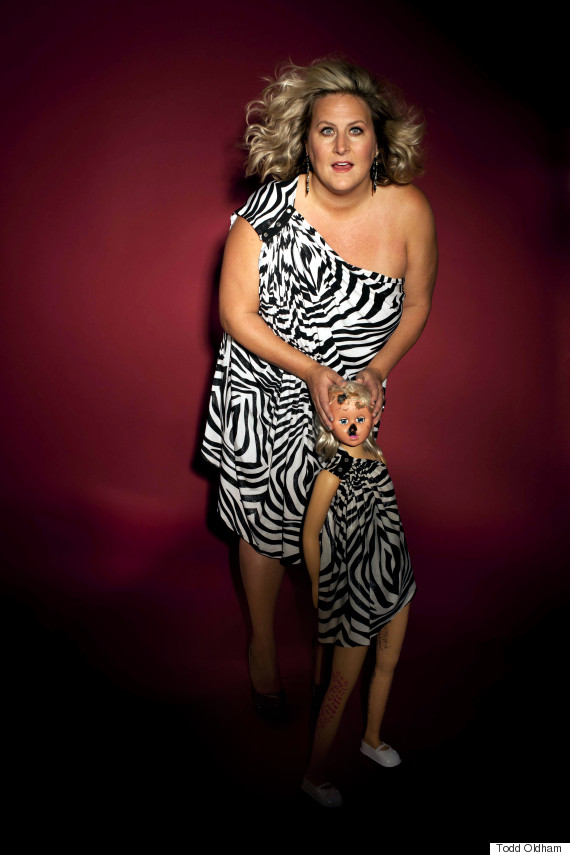 How have you seen New York's downtown scene shift since you first introduced the Larry Krone BRAND in 1997?
It has shifted a lot! I used to design clothes just for me and my family act which started as a conceptual art project disguised as a country-western music review. My only audience was the art world: galleries, museums, fairs, etc. When I wanted to branch out and test the waters outside of that world, I imagined getting booked in a burlesque show as one of the straight musical acts between the fan dances or whatever. That didn't really make sense for me, but I thought it was my only option because burlesque seemed to be dominating the scene.

Everyone is pretty much supportive of each other in the big scene, but my actual “scene” is just a tight group of real actual friends who hang out together and are always looking for ways to do stuff together.

Your work really represents the intersection of fashion and nightlife. Is there still a space for this in New York's rapidly changing downtown scene?
When I think of New York nightlife, the images that comes to mind are those black-and-white photos from the '70s of Studio 54. Everything is flash-lit and overexposed, and everyone is either wearing Halston or some homemade ensemble thrown together to show off their tits or whatever other body part. This is where I'm coming from. That nightlife hasn't existed for ages, but if you can feel it in what you're wearing, then maybe you can bring it to wherever you go in the clothes.

This will sound cliché, but my own personal nightlife consists of seeing my friends’ shows when I can, and otherwise sitting around my house drinking and eating with my husband Jim and our friends. So that Studio 54 thing is an admitted total fantasy from beginning to end! 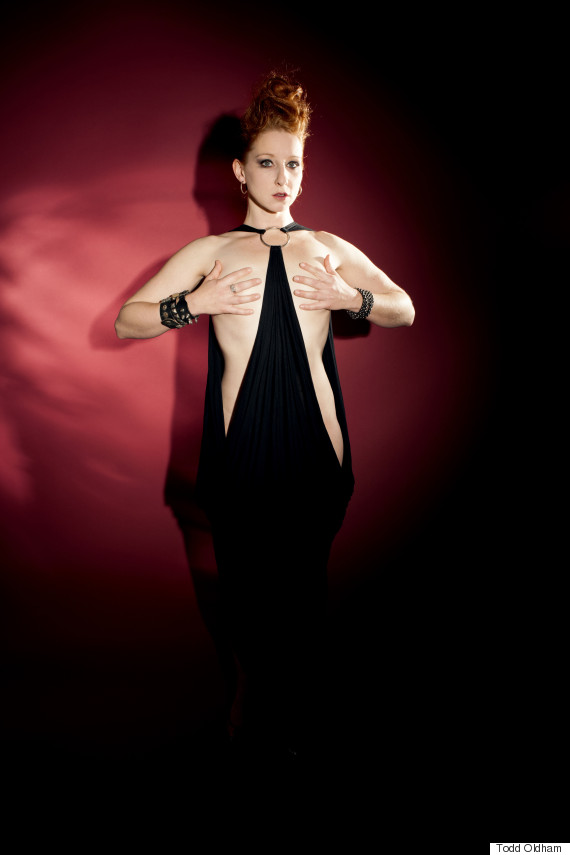 Which current artist or performer, in New York or otherwise, would you most like to create a look for?
Nobody could be more perfect for me than Bridget. So many of the clothes come from my reaction to and interpretation of what she does onstage combined with my love for her as a person. But I wouldn't turn Dolly Parton away. Or Gloria Steinem. Or NY 1’s Donna Karger. Or Tonya Pinkins.

I'm really dying to make something for Lauren Tewes. I've been watching reruns of the "Love Boat" recently, and I have become a born-again fan. It would be fun to bring some of that Julie McCoy sass and glamour to Ms. Tewes today.

What do you hope readers and viewers take away most from your book?
I think the desire of most artists is to be seen. This is a chance for people to step back from the fun and craziness of experiencing these clothes in the moment when they are onstage and really see what I do. Plus how it all fits together. And how it might fit in with the rest of my practice as a visual artist, musician, and performer myself.

"I think the desire of most artists is to be seen."

I also hope that it creates a little romance about New York and the artistic community that I'm giving a little peek of here. I like to imagine seeing this book as a teenager in St. Louis where I grew up and being completely overwhelmed with the desire to move to New York and be a part of something like this.

What's next for Larry Krone?
I'm hoping that this benefit at Joe's will raise the money I need to print the book! Once it is in the can, I'm looking forward to devoting a lot more time to being creative again in the artist’s studio as well as in the House of Larréon atélier and songwriting den, which are all actually the same place -- my East Village apartment. I'll also be doing the Afterglow Festival in Provincetown this September. 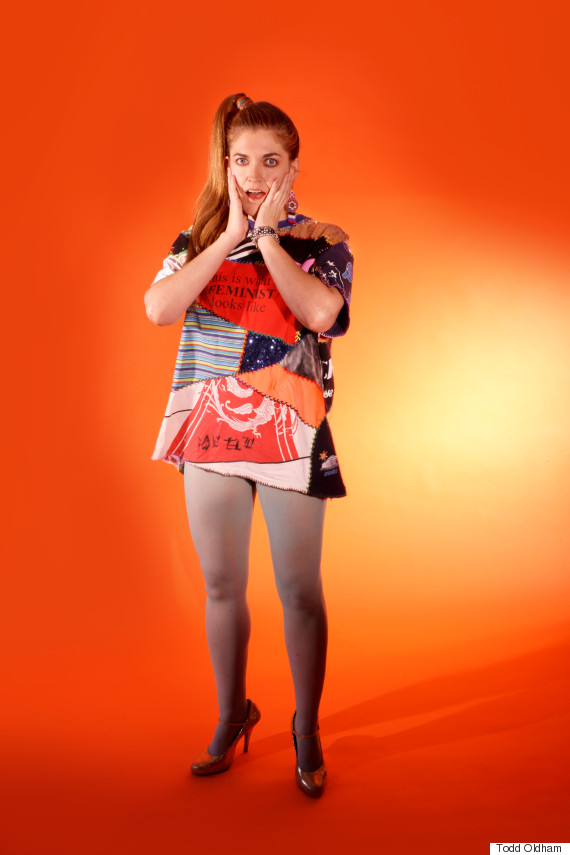 Hair and makeup in the above photos is by Frances Sorensen

This interview has been edited for content, style and length.