One year ago, I visited Haiti for the first time. A small group of us had been invited by the Hopital Albert Schweitzer(HAS) in Deschapelles, Central Haiti. From Port-au-Prince, a van drove us five hours west along a scarred and treeless landscape, through a continuous spread of brightly painted shacks. Despite our maniacal driver storming down the pitted road (Haiti has a high rate of vehicular mortality), we arrived safely at HAS. The hospital is located in the Artibonite valley where a scattering of trees and greenery frame a dusty shantytown: it was "lush" in comparison to what I had just seen. So we toured the hospital facilities, clinics and neighboring towns and witnessed the challenges. Haiti is one of the poorest countries in the world where over half the population lives on less than $1 a day. The hospital administers to an area of 300,000 with no other access to health care. The surrounding mountains are particularly poor and barren - people frequently walk ten hours or more to get to the hospital. Many die along the way. AIDS, tuberculosis, starvation and infant malnutrition - these are the daily affairs of the hospital. 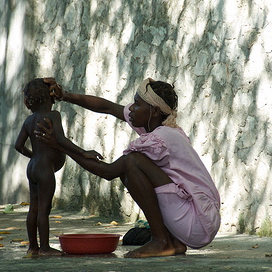 As I reflect on my holiday experience last year and in light of this year's economic and moral climate, I marvel on the ability of a few to change the lives of many. The example of Madoff alone gives credence to the claim. But it is the positive story behind the hospital's creation that is at the crux of my reflections this season. Flashback to the 1940s. William Larimer Mellon, of the Mellon banking family, was a rancher in Arizona, living an industrious and comfortable life with his wife Gwen and three stepchildren. One fair day in 1947, he happened upon a Life Magazine article entitled "The Greatest Man in the World", about Dr. Albert Schweitzer and his hospital in Lambrene, Gabon. Schweitzer advocated the ethical concept "Reverence for Life", taking on the responsibility of bringing health to an impoverished area in Africa.

For these ideas and for his field work, Schweitzer would win a Nobel Peace Prize in 1953. The Life Magazine article changed Larry Mellon's life. Immediately, he began a lifelong correspondence with Dr. Schweitzer. Two months later, at 38 years old, with no college degree, and against all odds, Larry decided to become a doctor and open a hospital in an area with the most need (per Schweitzer's suggestion). His wife followed suit, enrolling as a lab technician student. During summer 'school' vacations, children in tow, they searched for a destitute corner of the Americas where they could open their hospital. They traveled to Haiti, came across an abandoned Standard Fruit Company complex in the desperate Artibonite valley and their fate was settled. The hospital opened June 26, 1956, on Mellon's forty-sixth birthday, named Hopital Albert Schweitzer after his good friend. Funding HAS through a foundation established with Mellon family inheritance, Gwen and Larry spent the rest of their lives in Deschapelles. In addition to his involvement with the hospital itself, Larry built roads and pipelines in the valley. He established outlying clinics in hard to reach areas. He was a pioneer of the marketplace vaccination. He employed Haitian nurses and doctors and promoted community development. Until she was 89 years old, Gwen sat outside the hospital each morning, her desk under the shade of a wide tree, attending to a long line of patients. Larry died in 1989 and Gwen in 2000. The couple are buried in the hospital cemetery in cardboard boxes the way the poorest Haitians are interred. Even in death, they reached out to the community -- wood is expensive and Haitians should not waste what little they have. When I walked the hospital grounds, the valley and the mountains, everywhere I saw the ghosts of Larry and Gwen. The locals recall them fondly, sadly. Children in the valley run about with the names Larry and Gwen. Larry Mellon pursued a seemingly hair-brained dream: to restore human dignity to a small sliver of the underdeveloped world. True, he was a Mellon and had the financial where-with-all most do not. But imagine also the obstacles: Haiti's turbulent political history, its lack of infrastructure such as an electric grid and proper roads, the dire poverty, the corruption, the violence. How many of us would uproot and move to an area not with the best view but with the most need? When confronted by such grand acts of sacrifice, maybe we assume we are cut from a different cloth, that we are incapable of such heroics. But Larry once said "People tell me what I am doing is noble but I really know it is selfish. I have found happiness in helping people no one else is helping. It was worth everything I had to get to this. I have sacrificed nothing." These actions of great men and women, they are not just events of the past to marvel at in biographies, these actions are alive like parched trees on barren hillsides. Haiti is in worse need than ever before with soaring food and energy costs and a trail of destruction left by four summer hurricanes. The hospital struggles too with the current recession, the ups-and-down of politics, the whims of donors, the volatility of the weather and all unforeseeable and uncontrollable forces in our world. Perhaps we will not all have the same enlightened mid-life crisis as Larry Mellon. Perhaps we will not replant the mahogany forest of Haiti. But if we cannot be creators then at least we can be gardeners. We can help water the great works of others so that they do not wither in thirst and pass away. Surely then a few of us can continue to change the lives of many. (www.hashaiti.org)