Depending on who you ask, regulation is either a hindrance to the global economy or our only hope against global economic collapse. Safe to say Larry Summers, who played a pivotal role in deregulating the financial markets during the Clinton administration, tends to favor the former category.

At the Bretton Woods conference over the weekend, sponsored by the Institute for New Economic Thinking, Summers, who resigned last year as director of Obama's National Economic Council, defended complex financial instruments against criticism that they played a central role in dragging the global economy into its current recession.

"I am in less of a hurry to condemn the [financial] innovation as the cause of the crisis than many," Summers said, because "most financial crises [in the past] do not seem to have their roots in new-fangled financial institutions." Instead, he said, it's probably better to blame the housing bubble.

In the wake of the worst largest economic meltdown since the Great Depression, the financial services industry has come under intense scrutiny for its ever-increasing reliance on complex financial instruments like credit default swaps and collateralized debt obligations, relatively recent innovations that critics say has created a high-risk, prone-to-collapse economy.

Summers, however, said he wouldn't institute more financial regulation than necessary, implying in the interview that overly-ambitious attempts could lead to more corporations like government-sponsored mortgage giants Fannie Mae and Freddie Mac, two companies he contends "were the site of the greatest degree of irresponsibly" during the crisis.

Speaking at length about the competing ideologies surrounding regulation, Summers distinguished between one side worrying that regulators will become "co-opted" by a conflict of interest, and the other afraid regulators are simply "ignorant" of the institutions they are charged with controlling. "There is hardly anyone," Summers said, "that is both knowledgeable and [sic] unco-opted."

As Secretary of the Treasury during the Clinton administration, Summers was a key figure in an effort to relax regulations on derivatives that spread risk throughout the financial sector. In 1999, Summers praised the repeal of the Glass-Steagall act, originally meant to control financial speculation, as a step toward creating "a [financial] system for the 21st century." Later, according to a former top official at the U.S. Commodity Futures Trading Commission, Summers said derivative regulation could potentially cause "the worst financial crisis since the end of World War II."

On Tuesday, the accuracy of Summers' comments may have been undercut by a report by the Economic Policy Institute entitled "Regulation, Employment, and the Economy: Fears of Job Loss are Overblown," with the housing crisis being one of three major areas of focus in the paper.

EPI also criticized the methodology of past government reports studying the costs of regulation to the overall economy, finding one study, for example, where 13 of 21 predictions had been "significantly" overstated, while under 3 of 21 had been understated.

Every year, the Office of Management and Budget runs a cost-benefit report on government regulations, comparing the cost of slowing down business against the economic and social benefits of the regulations. In every year between 2000-2010, the benefits of regulation outweighed the costs mightily, on average by roughly 700 percent. The ratio is especially startling in the middle years of the decade: 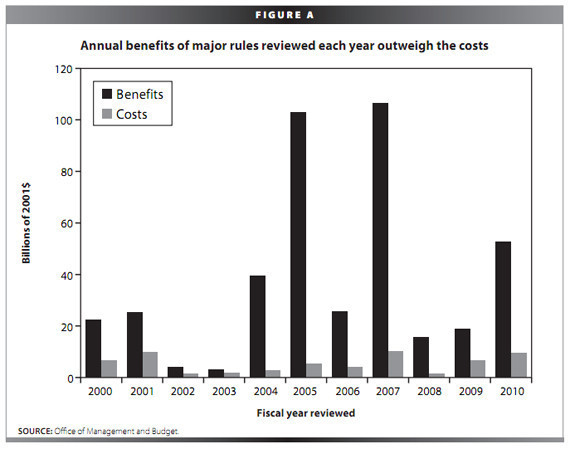