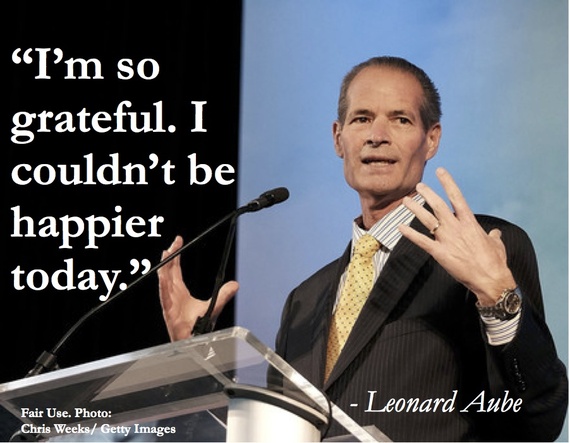 Leonard Aube waited at the podium as the standing ovation thundered around him, making any attempt to speak futile.

At last, the applause ended and people began sit down. That's when Len, who is executive director of the Annenberg Foundation, pulled out a small red camera. With a big smile, he said:

"Darn. I was going to take a picture of you all standing because I don't think I'm going to see that ever again."

Laughter erupted and the hundreds-strong audience in the cavernous old warehouse took to their feet to render another upright sonic salute. 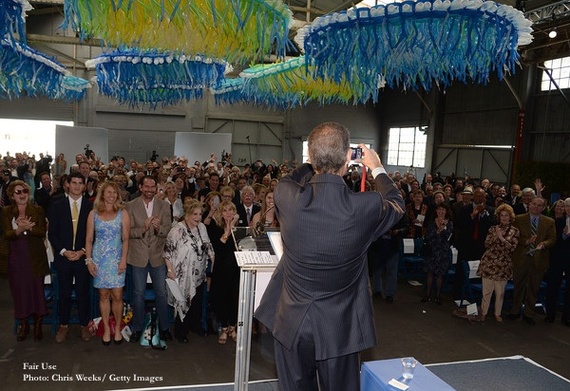 Len took the photo of the adoring crowd and drank in the moment.

But looking at him, I noticed all the weight he's lost -- his jawline pronounced, his cheeks hollowed. At his neck, the collar of his dress shirt hung loose even though it was buttoned.

The City of Los Angeles named a street after Leonard Aube last week.

This street runs along the site of AltaSea, a $500 million public-private project to transform 35 acres filled with old warehouses into a hub for innovation in ocean-based science, education and business.

At the February 11th ceremony to dedicate the new street name, Wallis Annenberg, the CEO of the Annenberg Foundation, announced a $20 million matching gift to AltaSea, given in Len's honor.

In philanthropy, that's not only a significant gift, it's a significant sign that the Annenberg Foundation is doubling-down on another ambitious, collaborative effort to reinvent Los Angeles. (The foundation had earlier pledged $25 million to AltaSea.)

But I couldn't stop thinking about Len.

"I don't think it's any secret that Leonard has been battling an illness for some time," said Wallis.

Wallis opened her speech with a telling joke:

Woody Allen once said that he didn't want to achieve immortality through his work, he wanted to achieve it through not dying. The truth is, none of us will be so lucky. How we touch the lives of others, how we make the world a different place, a better place for having been here, that's our shot at immortality. And while I'm extremely proud to join in the dedication of Leonard Aube Way, he doesn't need his name on a sign to have a permanent impact on this city and country... In his time at Annenberg, Leonard has played a key role in giving over $2 billion to more than 2500 nonprofits globally.

Mayor Eric Garcetti also spoke at the dedication, running through a list of Len's accomplishments:

Len's grand vision for this place [AltaSea] is not some sort of anomaly. Len has been seeing and executing these grand visions for our city and region for decades. Anyone ever heard of the Annenberg Space for Photography? That was the vision of Len Aube. Anyone experienced the Annenberg Beach Community House in Santa Monica? That was Len's vision. What about the Wallis Annenberg Center for the Performing Arts? ... Or Annenberg Alchemy? Or my personal favorite, LA n Sync? We're here to honor Len for his contribution to Altasea, but in reality we should be naming streets and buildings all across this town for him.

Len is a soft-spoken social entrepreneur. I have worked on a number of Annenberg projects with him and in each one, he checks his ego at the door to better encourage and empower his team. Like the great British explorer of the Antarctic, Sir Ernest Shackleton, he never lets a goal -- no matter how big -- become more important than the people he works with or the people he serves or the people who will benefit from the philanthropy once it's completed. Len is ambitious and creative and collaborative. But most of all, he nurtures projects by nurturing the people who make the projects happen.

During Len's comments at the dedication, he literally thanked everyone present for what they had given him. And he wasn't bullshitting. His appreciation is as genuine as it is inclusive.

He had many of us near tears when he spoke of his relationship with his wife as he stood flanked by her, his son Kyle and his daughter Katie:

This beautiful person standing by my side, my wife, Robin. Let me just say this in the simplest terms. Without the love and support of this partner of mine for 25 years of marriage, I would not be standing here today folks. And that is not an overstatement. 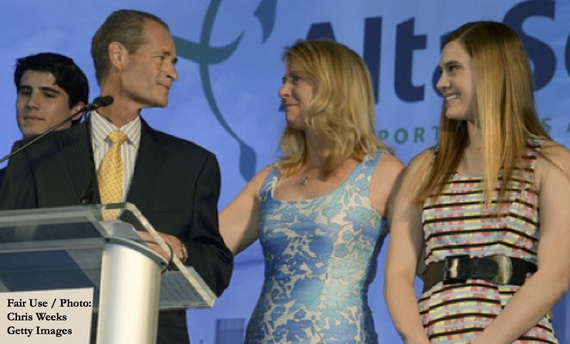 Finally, he spoke to the audience as if we were each an old friend sitting across the kitchen table:

I'm so grateful. I admire and appreciate all the ways you've touched my life and blessed my life. I just couldn't be happier today.

In the audience we admired his ability to enjoy the moment even as we felt his unspoken sadness.

CORRECTION: A previous version of this post incorrectly identified the name of Leonard Aube's daughter.